A sprained ankle happens at least once to almost everyone; occasionally it can ruin the rest of your life; many tissues are commonly involved.

Lower leg injuries often occur when there is weakness of one or more muscles on the side of the lower leg, commonly one of the Peroneus muscles. Normally these muscles should prevents the ankle from twisting, most commonly inwards, called inversion. 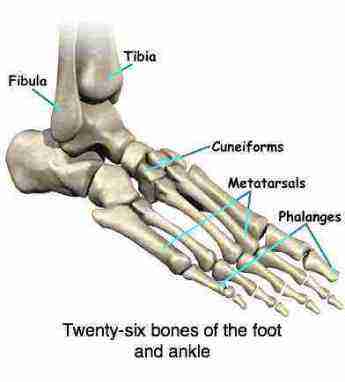 The talus bone moves mainly in one mode, called dorsi and plantar flexion; up and down. When an ankle is sprained, the bone subluxates within its socket, see below, causing jamming. This is what causes the severe, sharp pain of a sprain.

The talus may remain partly locked for years, if not correctly freed with the appropriate adjustment, changing the whole movement pattern of the foot, knee and hip. At chiropractic coalface 2 you can read about how the Dutch national marathon champion had to stop running because of knee pain that was directly caused by an untreated ankle sprain.

The talus sits on top of the calcaneus, or heel bone, in what is known as the subtalar joint. Can you also see the ankle mortice in the pictures below?

There are so many bones and joints, with so much pain potential.

The joint or, ankle mortise, as it is called, is formed between two leg bones, the tibia and the fibula and the talus.

The talus fits snugly into a socket formed by the tibia and the fibula, moving like a hinge and allowing the foot to move up and down, supported by an array of ligaments.

Trauma is probably the most common cause of ankle joint pain, but other conditions like a flat foot, or an arthritic hip that change the gait could also be a factor.

Very serious injuries can happen to this complex as you can read about in this ankle joint pain casefile.

The more common fractures are of the ends of the long bones, the tibia and fibula. However, fracture can occur of any of the ankle bones.

Whenever there's enough force to break a bone, assume that there have been torn ligaments too.

How reliable are xrays? A missed fracture can have terrible consequences for the ankle. Scroll down for this case of avascular necrosis.

Careful correction of any ankle mortise and subtalar joint subuxations is a very important, and oft neglected, part of the successful treatment of a sprained ankle. 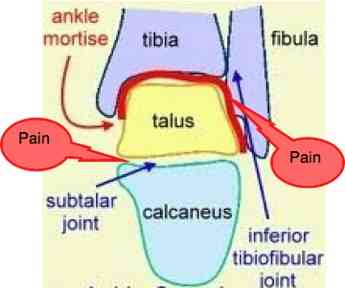 There are ligaments on both sides of the ankle that hold the bones together. They give the joint stability. They connect bones together while tendons connect muscles to the osseous structures.

In an inversion sprained ankle, the most common injury, usually it is the ligaments on the outer side that are stretched and occasionally ruptured. Bruising is a sign that there has been some tearing of the tissues.

Should that correction of the subluxations in the ankle not be done, it leads to vital changes to the biomechanics of the foot. This is usually the underlying cause of chronic pain, plantar myofascitis and more difficult to predict changes in the knees, hips and spine.

Yes, that arthritic knee may be the result of an old ankle injury that wasn't properly cared for.

An ankle guard may be useful during the healing phase of the damaged ligaments. Research shows that small movements of the joint, rather than total immobilization as in a cast, for example, promotes faster healing in the treatment of a sprained lower limb.

The trend today is towards a boot that limits movement, provides pressure to reduce swelling, but can be removed for icing, bathing and gentle non weight bearing exercises.

Crutches may be vital for a period in a serious injury. However, keep the ankle mobile and moving, gently if it's swollen and sore, by doing the alphabet exercises. Soon something coming up on YouTube for you, but for the moment just wriggle the joint about whilst you are sitting.

A strong recommendation; if you know your ankle is not getting better, get a scan. Fractures of the one of the tarsal bones lurk and are often missed on plain xrays, sometimes with very serious consequences.

Muscles of the ankle 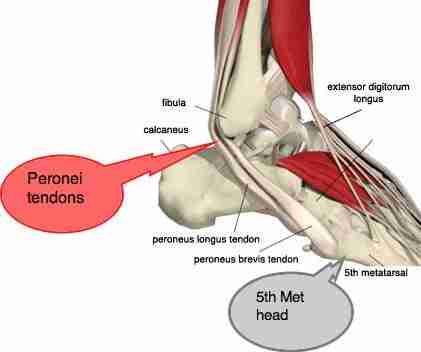 There are also many tendons that cross the ankle to move the foot and the toes. Tendons connect muscle to bone, enabling you to move your foot; the muscles of the ankle are commonly involved.

The muscles usually affected lie on the outer side of the lower leg. There are three of them called the peronei group, plus a few others, mainly for moving the toes.

The contraction of Peroneus Brevis may be so sudden and severe, in attempting to prevent inversion ankle sprain, that it ruptures off its attachment to the bone. This is called a Jones fracture and immobilisation in a cast is essential.

As with all conditions, much of the emphasis needs to be with get properly better, before returning to active sports. 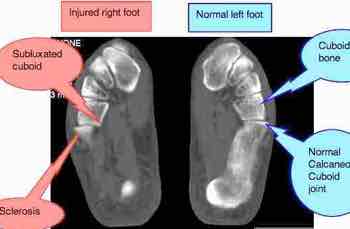 There is some interesting research that magnetic care may help in the healing of ankle fractures and sprained ankle. 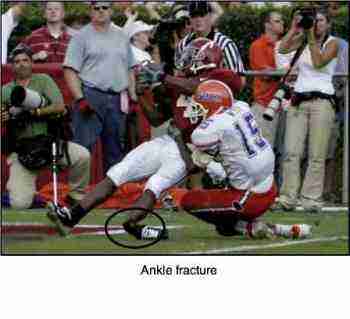 X-RAY may be important to rule out fracture. It will then need to be cast for 6 weeks. A crack may not show up immediately, so the X-ray may need to be repeated after 10 days if fracture is still suspected.

If you don't rehab your ankle then plantar myofascitis is one not unlikely result.

A chronically fixated ankle mortise or subtalar joint after a sprain that was not adequately managed, prevents normal pronation whilst walking and running.

This changes the whole gait cycle producing strain on all the joints above. Hip arthritis is but one consequence. This Kellgren Lawrence grading system is a useful measure of the severity of the degenerative change.

Hip arthritis starts insidiously with discomfort and stiffness in the groin, side of the pelvis or buttock, often around fifty years of age. Initially it's intermittent, coming and going, eventually after about a year becoming a constant nagging ache with some sharp stabs.

Because it changes the biomechanics of walking, it begins to affect the sacroiliac joint and buttock pain is not uncommon.

Eventually raising the leg to put a sock on becomes painful and restricted. The key, as with all disease, is an early diagnosis and the correct treatment. In the case of hip arthritis that might just be a simple set of exercises done faithfully and some dietary changes to include rich sources of omega 3.

Fatty fish like salmon and freshly ground flax seeds are the best sources.

I will endeavor to answer every question you pose about your health. Please write in decent English if it's your home language.

The more detail you give the more useful you will find my reply.

Pinch nerve up back leg. I need far more information to give you a useful reply, Dee. Dr B

Hello. I sprained my ankle 2 weeks ago; went to hospital, and had x-ray, and been wearing an air cast and on crutches. Today is the last day og the air …

My foot and whole leg still hurts Not rated yet
About 2 months ago I was trying to move my boyfriend's motorcycle (out of spite, trying to make a point, I'm 105 lbs) which is about 800 lb and I slipped …

Leg different than before Not rated yet
I have spinal bifida occulta just above my tail bone. Chiropractors have been trying to straighten my scoliosis caused by this. In the process they have …

Sprained ankle and am experiencing pains in knee and thigh Not rated yet
Three weeks ago I sprained my right ankle while playing soccer. I was running and my foot went to the side and I heard a "pop". I immediately experienced …

Left leg chronic daily pain and atrophy Not rated yet
Orthopedist put me in a boot for right Achilles tendinitis. During that period I hurt my left leg, and no one could figure out what was injured. Mri showed …

Multiple ankle sprains Not rated yet
I was a gymnast for 9 years and during the last three years of my career I had sprained my ankles about 10 times. After this I decided to quit and move …

Ankle sprain Not rated yet
I was playing basketball and I took a wrong turn, and rolled my ankle. Now I have this huge bruise sticking out that's literally where my bone that's off …

Foot/ankle problems Not rated yet
Hi, when I was in sixth grade I sprained my foot when I tripped on my toe. Now I am in eighth grade and during that period of time my ankle would hurt. …

Left ankle pain -causing other pain Not rated yet
Hi; around 2009 I turned to walk; there was a very small stomp like a sidewalk but really low & wasn't visible. By me turning to walk away, I had a twist …

hip and thigh weakness after minimal exertion Not rated yet
In early June of 2013 I noticed a slight feeling of tightness in my right thigh near the hip bone. Within days I was experiencing rapidly increasing muscle …

Knee pain Not rated yet
Knee pain Can an old ankle break cause Knee to become bone on bone? Dr. Barrie Lewis Most certainly. Take an old dry stick and …

Sprained left ankle ,foot hurts and so does whole leg. Went to ER 2x and my own Dr. Said to use crutches Not rated yet
My left leg hurts so bad and I can not lift it to put it on the bed or couch.My knee cap hurts too mostly at bedtime. What do you suggest? …

ankle pain Not rated yet
Ankle okay to stand on but, hurts to bend ankle to walk.It started when I got cellulitis in my right ankle. the cellulitis healed but,pain still stayed …

Kellgren -lawrence grading Not rated yet
In most of the research papers the abmormality in bones are calssified on the basis on kellgren lawrence garde values. ... I have some questions related …

Ankle/foot injury Not rated yet
I was returning a serve in tennis. I leaped out to get to the ball and landed on the outside of my right foot. I heard a crunch or pop-like sound and …

Multifactorial lower back pain and immobility. Not rated yet
Hi I am 49 and in constant pain and unable sometimes to move. I have been diagnosed with facet joint arthropathy (mri) after 20 years of back pain …

hurt ankle Not rated yet
now pain in my groin and thigh Dr. Barrie Lewis The details provided are too scant to provide an intelligent answer, but recognise …

lateral right ankle sprain Not rated yet
i had this untreated for 4 years, i need to know which muscles are tight, i used to squat alot and did alot of single leg excercise. i feel alot of spasms …