Meralgia paresthetica causes numbness and sometimes a stinging upper thigh pain, usually on the side above the knee.

This condition is caused by a trapped nerve in the groin causing pain classically on the side of the thigh, but also sometimes the front of the upper leg.

The trapped fibres are from the Lateral Femoral Cutaneous Nerve. It originates from the upper lumbar spine, L2 and L3, meanders down a large muscle deep in the belly called the psoas, crosses another in the pelvis called the iliacus, and then is trapped as it passes under the inguinal ligament.

There is usually no acute low back pain, though there may be a dull ache in the upper lumbar spine. Fixations are usually found here by your chiropractor and in our opinion are a large part of the problem.

But, with groin pain, various impingement problems in the hip should also be considered. Conditions like Femoro acetabular impingement syndrome in the younger person, progress to hip arthritis in the older patient.

Upper thigh pain occurs but in varying patterns depending on which of the little slips of the femoral nerve is affected. Is the numbness on the side or front, in or below the groin? Is it stinging in the buttock? Meralgia paresthetica classically affects the lateral thigh.

Often there is an upper lumbar thigh pain connection. 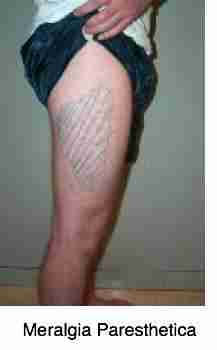 Meralgia paresthetica is what we call a double crush syndrome; like the carpal tunnel where the median nerve is trapped, often in several places somewhere in the neck, shoulder, forearm and the wrist.

The result is the same; a burning, nerve type pain in the thigh, with minimal back pain.

Classically the pain is on the outer side of the thigh, but because the femoral nerve has so many small off shoots, variants may be in the groin and front of the leg, and even the labia.

Whilst these are not true meralgia paresthetica, to all intents and purposes the result is the same, only the pain is in the front of the thigh. Here your chiropractor will be even more careful however, as the femoral nerve is motor as well as sensory; you may start to get weakness of the quadriceps, the large four part muscle on top of the upper leg.

If you hop on that leg, does it tend to give? Report it immediately.

Your chiropractor will do a test which stretches the femoral nerve, and it's likely to cause much pain in the front of your thigh.

In the above graphic, can you trace both the lateral femoral cutaneous n. with side of the thigh pain, and the femoral nerve which would affect the anterior upper leg, as they make their way through the groin? 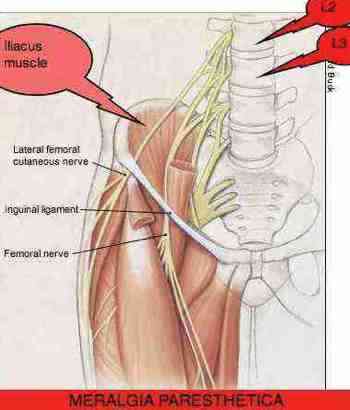 Extreme tenderness in the groin

If you run your thumb down through the muscles of the anterior thigh (careful, you may cross the Femoral artery pulsating under you finger, avoid it) you are likely to encounter extreme, and I mean extreme tenderness in the groin of one or more muscles. However, this is not always the case.

Most syndromes come in variant forms. Diabetes may cause you to go blind and a toe might go black and fall off, but that isn't always the case fortunately. Follow the diabetes rules, and you can live to a healthy eighty with your eyesight and ten toes intact.

Likewise with Meralgia Paresthetica, follow the rules, and this too will pass.

Part of the treatment is to address those extremely painful muscles in the groin; chiropractic care is not usually particularly uncomfortable, but this really does hurt for about thirty seconds, and may leave some bruising.

It's very rare, but sexual advances chiropractor do occur, so it may be best to take a friend or partner with you.

Some of these features may also occur in the so-called SLIPPED DISC SYMPTOMS  the distinguishing "differential diagnostic" features being the lack of serious low back pain, and the extreme tenderness in the groin where the nerve is being pinched.

So too, no loss of reflex or muscle weakness as the LFCN is not motor.

Let it be said, this can be a very painful and serious condition. Mostly it is benign and well managed by your Chiropractor. However these nerves can be affected by an abscess in the Psoas muscle (are you feeling sick, running a temperature, history of TB?), by bowel tumours (have you lost weight? are your bowels working normally? has there been a change in your bowel habits?). If in doubt, also consult your physician.

Is the pain in your thigh brought on with exercise? Read this strange tale by chiropractor Bernard Preston. Intermittent claudication ...

This is important: The Lateral Femoral Cutaneous Nerve is a sensory nerve. When irritated it does not cause specific muscle weakness in the leg.  However, if the femoral Nerve itself is affected, there may be Quadriceps weakness, and loss of the Knee jerk reflex. Plus sensory change in the skin of the upper leg and/or inner lower leg. Whilst Femoral nerve damage also responds to careful thorough chiropractic care, any specific weakness in the quad must be noted and monitored.
In this short YouTube clip you can yourself determine if there's specific muscle weakness in your leg.

Whilst meralgia paresthetica is not uncommon, it is fairly unusual that I am consulted in the same week by two women with severe meralgia paresthetica causing upper leg pain. Because it is a serious condition, I started treatment immediately, but also referred both patients to their doctors for x-rays. Chiropractors cannot order them in the Netherlands.

After three treatments both were considerably improved, there was less pain in the leg and they were not unhappy.

Mrs J continued to improve, and the pain and numbness was completely alleviated within about 6 to 8 weeks. She is a very satisfied patient and is coming in currently in every two months for a checkup.

Mrs P's doctor decided this was far too serious a condition for a quack, and advised her to stop the treatment. After all he said, there is no proven cure for meralgia paresthetica, which is quite true; there is no research confirming that there is any effective medical or chiropractic care. That was five months ago.

Yesterday her daughter phoned to say her mother was going for a back operation. Did I miss something? Is it because medicine is just anti-chiropractic? Was she over compliant to her doctor's overbearing demands?

Frankly I do not know. What I can tell you is that chiropractors treat upper thigh pain with great confidence. Sure, if you have been losing weight, or are running night fevers, have a change in bowel habits, or if you're a heavy smoker then a second opinion is definitely on the cards.

The first step of chiropractic help, of course, in the treatment of meralgia paresthetica is a proper history and examination to rule out other diseases. An aneurism in the pelvis caused by smoking; it really does knock ten years off your life, more if you are a woman, heart attack, tumours and the like really should be considered, though rarely do they cause meralgia paresthetica.

Chiropractic care may include some or all of the following:

This simple core muscle exercise should be done by EVERY low back sufferer before arising from bed EVERY morning. It only takes 60 seconds after all.

Chiropractic help treatment programme for meralgia paresthetica would probably cover a 6-8 week period, with perhaps 10-15 treatments. Every person obviously is different. Some may require less, other more. Talk honestly to your DC.

Another condition that needs to be considered when faced with lateral thigh pain is the Tensor Facia Muscle and its long tendon, the ITB, or iliotibial band; it runs from the pelvis down to the knee area.

Tingling in legs and feet

The key sign is that sciatic and femoral stretch tests will be positive, which is less likely with a pinched lateral femoral cutaneous nerve. Also reflexes will be affected.