Six golden rules for chiropractors is an attempt to see things from our patients' perspectives.

Dr Robert Lamberts, MD, came up with these six rules for medical doctors; they grew out of a discovery that a great many patients were grossly dissatisfied for one reason or another.

Research has clearly shown that Chiropractic patients are a good deal happier. Are they totally happy? Certainly not. Can we as a profession learn something from the Lamberts' experience?

1. They do not want to be at your rooms, Doctor.

For the medical doctor:

It may seem odd to patients, but most doctors forget that going to the GP is generally unnerving. Being in our rooms is normal to us but not so with most of them.

The spotlight is on them and their well-being. They stand on the scale, undress, tell intimate things about their lives, confess errors, are poked, prodded, shot with needles, lectured at, and then billed for the whole thing.

There is always an underlying fear and self–consciousness that pervades when a person is sitting on the exam table.

The best thing to do in response to that is to show compassion. 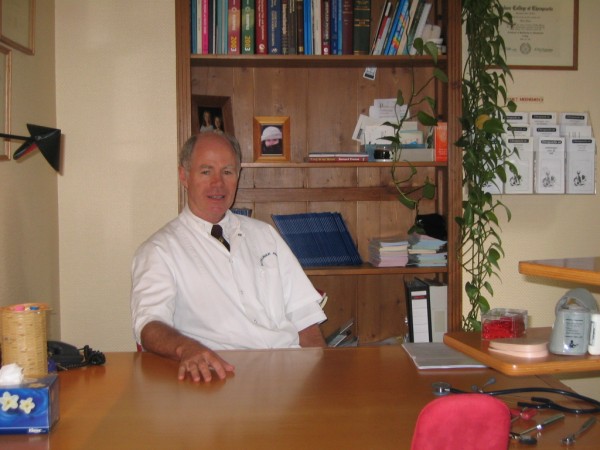 Could it be that we may have forgotten that a consultation with a Chiropractor (certainly for the new patient) is unnerving?

The patient has probably been sternly warned by their doctor that it could be dangerous. A chiropractic manipulation could break a bone, cause a hernia or worst of all a stroke. The fact that the medical doctor neatly omitted to say that it occurs only once in about two million manipulations, making it about the safest health procedures of all, is neither here nor there.

They will be asked to reveal some very personal things about their lives, confess to stupid things they may have done and generally open a can of worms that they hoped would just go away, but it did not.

They will have to undress and be stared at, like a poodle at a doggy show; evaluated and assessed. And it is all done with a critical eye.

Perhaps they fear a lecherous eye.

2. They have a reason to be at your rooms, Doctor.

They do not come to your rooms to waste the doctor’s time. Yes, early in my training I was incredulous at the reasons some of the patients were coming to see the me. Why come in for a headache? Why come in for a cold?"

"It took me being in my own practice to realise that there is (almost) always an underlying reason for a patient to come in.

On every visit I try to identify the real reason (or the real fear) that brings them to see me. I do not end the visit until I have addressed that reason."

Patients usually come to my office because they have pain; often lots of it. They are not a little frightened. Fearful that they are experiencing an exploding and disabling numb, tingling sensation that runs down the arm or leg.

Fearful because when their neighbour, or brother, had something similar it all ended in a big, scary and expensive operation; perhaps it ended well, maybe it was a disaster, but either way it turned out to be a huge interruption in the normally smooth passage of their lives.

They want to know, can chiropractic help me, or am I wasting my time and my money.

3. They feel what they feel, Doctor.

" Patients will often tell doctors their symptoms in a very apologetic tone. They seem to think that they have to come to the doctor with the “right” set of symptoms and not having those symptoms is their fault.

Sometimes those symptoms make no sense to me at all, and I am tempted to dismiss or ignore them. But as a doctor, you have to trust your patient. Yes, some may exaggerate what they feel out of anxiety or out of fear that you won’t hear them for lesser symptoms, but then your job is to uncover the anxiety, not ignore the complaint.

I have heard from many patients that their doctor “did not believe” their complaints because they did not make sense.

If you do not trust them, why should they trust you, Doctor? "

"My patients don't seem to be unduly anxious about telling me about their pain. Usually it is very real and they can describe it in lucid and graphic terms. They seem to know that most chiropractors are good listeners.

Where they are less forthcoming is what caused the pain. How their husband flung them against the wall. Or they weren't wearing a seatbelt. Or they tried lifting the grand piano.

I recognise and understand their underlying fears about chiropractic treatment, though it is not usually expressed up front. What I have difficulty with is that they have no fear of taking a drug with common and frequent well described serious side effects; not many missed ex-president Bush's wife's tale of woe recently. But they are terrified of having a stroke, even though it only occurs once in 6 million neck adjustments."

"On the whole I'm never too worried about telling what is wrong with me or being adjusted. The only manipulation that always worries me a lot is the neck, the crack when it happens; the moment my chiropractor makes the quick movement, that's so scary and it remains worrying for me.

And the other thing i'm always a bit worried about is the fact that one should not have too many manipulations in a short time, because they told me that is working against it. You must let the body rest again, if you go too often there is a chance the bones go back into the old position quicker. Is there any truth in that? Well, those were my concerns regarding the chiropractor.

I see my Chiropractor regularly, maybe once per 3 months, and I go to the gym 2 of 3 times a week and try to keep my neck in the right position.

I saw a chiropractor over the summer in June of 2009. I had pain in my neck and in my mid back. He adjustments over the course of several weeks, some with heavy force. After some of my appointments I noticed tenderness in my sternum, something I'd never felt before.

He said it might just be muscle related. I stopped seeing him as I felt he was a lousy listener and kind of arrogant. It is now January and I still have the pain in my sternum. Should I see a chiropractor? And if so, what should I look for so as to avoid further injury?

4. They do not want to look stupid, Doctor.

People are often worried that they are over–reacting. They wonder what the doctor must think of a person who comes to the office with that symptom. This is especially true of parents bringing their children in. Nobody wants to be ‘that mother that over-reacts to everything’.

In response to this, try to say, "I am glad you came to the office for this because…" or "Yes, I can see how that worried you since it could be……"

A consultation with a chiropractor is often the last port of call. They have been to the doctor who prescribed some medication; when it did not help, he or she referred them to the physiotherapist. Perhaps that did relieve some of the symptoms but the relief was temporary, or not wholly satisfactory for one reason or another.

Now they are embarrassed because they know that you know that they have been around the block, and a chiropractor was the very last on their list of options. All have been exhausted, and now they are desperate.

But it is also time to explain that because they have had the problem for so many months, or even years, that a cure is unlikely and if they respond well, an occasional but regular consultation is in the offing; as is a set of exercises done in a disciplined manner every single day without fail.

5. Patients pay for a plan, Doctor.

What do people pay for when they come to see the doctor? For an opinion, yes and for knowledge as well, but what they really want is a plan of action. They need to know what is going to be done to help.

Try to give a plan, either verbal or written, to each patient that walks out of the exam room. What medications are given and why? What medications are to be stopped? What tests are ordered and what will the results mean? When is the next appointment? What should they call for if they have problems? The better these questions are answered, the more confidently the patient will walk out of the exam room.

“The days of paternalistic medicine are over; no handing a prescription and just saying "take it." Patients should know why they are being told to put things in their bodies.

I fully agree that the patient be fully informed, and that a treatment plan is made.

As a patient, once you see a chiropractor, you may have seen other doctors and been disappointed. Hence, you are weary of the medical profession. You then decided that you'll look for the treatment that YOU believe is going to help you, (you hope) and you are willing to pay money for it.

This is one reason why I, as a patient, highly appreciate it when the chiropractor explains what is wrong, why it is wrong, what the treatment entails and what I can expect and not expect. It builds trust. Explanations with a skeleton I find helpful, so I can visualise the treatment and mentally co-operate fully.

Secondly, part of the treatment will involve exercises, and the more I feel informed and involved, the more I am motivated to do them consistently.

And finally, there is the "faith" aspect as well. The more I trust the treatment, the more likely it will be successful.

Therefore I feel that full information and involvement and an open, professional relationship with the doctor is essential to the success of the treatment.

6. The visit is about them, Doctor.

"With all of the stresses in a doctor’s rooms, doctors do get tempted to complain about things themselves. Who better to complain to than someone who feels much the same way?

But patients are paying for you to take care of their problems, not the reverse.

Doctors should try to keep their personal gripes or frustrations to themselves as much as possible."

"I have decided to change my chiropractor. At the last consultation he spent so much telling me about his holiday, that I wasn't interested in, and complaining how tired he was and then, before I could say Jack Robinson, I was shooops out the door. He wasn't focused on me and my needs in the slightest."

The last of our six golden rules for chiropractors we feel should always include something they can and should do at home; perhaps something about exercises or nutrition. A word on the value of table olives[1] as well as the oil for their anti-inflammatory effect would never go amiss.