This is the report of what can happen when a wrong diagnosis is made and the inappropriate treatment is recommended.

Mrs van der S is only 34 years old yet she now has the lumbar spine of a woman of sixty. How can that happen?

Nine years ago, when she was twenty five, she had her first attack of acute low back pain, known in Holland as spit, or non specific LBP for which the usual treatment is anti inflammatory drugs and perhaps physiotherapy. In retrospect it was obviously her first herniation. She recalls clearly that she could not bend forwards, bearing down on the toilet was painful, sitting was impossible and turning in bed was agony.

The symptoms eventually receded but she recalls that her back was left much stiffer.

Four years ago she had her second attack of spit. The symptoms and signs were similar. Once again there was no leg pain, and she recovered within a few weeks. Everyone was satisfied.

But, in fact, what was happening? Each time the bubble of gel in the centre of disc, the incompressible fluid that keeps the bones of the spine, the vertebrae, apart was partially lost. This allowed the vertebra above to settle deeper on its mate below. 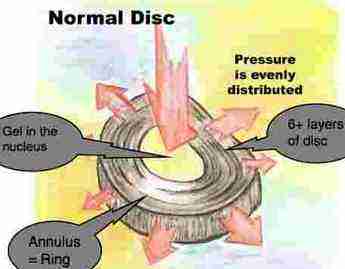 Slipped disc symptoms case file shows what can happen when a wrong diagnosis is made and inappropriate treatment recommended.

Mrs van der S had her third episode of 'spit' and decided instead this time to consult a chiropractor. Me. Tingling had started on the side of the lower leg. Forward bending was very painful, bearing down (called a Valsalva in chiropractic jargon), coughing and sneezing were painful, (together called the triad of Dejeurine): Pain with

and the Slump Test (+2) was strongly positive. It provoked tingling in her lower leg.

You can do the Slump test for sciatica at home, but be careful. The purpose of orthopaedic tests is to provoke the condition - done in a slipshod fashion the test can certainly aggravate your back.

Still no X-rays had ever been taken and, given the common nature of the condition - I am consulted each week with at least 10 patients with a similar presentation - we agreed to a short trial of chiropractic adjustments. Happily she responded very quickly. Too quickly. When the pain passes over quickly, I find patients are less inclined to do the rehab exercises faithfully. To be quite honest, despite 29 years with backs, I too under estimated just how serious it was. X-rays are really ALWAYS indicated with a history like this, and especially with radiation to the leg. 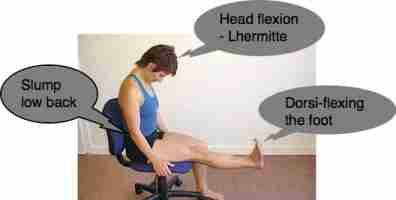 Tingling in feet and legs

Slipped disc symptoms case files almost always progress to pain and tingling in feet and legs, more commonly on one side only.

The straight leg raise is the other classic test for a pinched sciatic nerve.

Mrs van der S had her fourth episode, and this time the pain did not decline so quickly as it did nine months previously when she first consulted me. I ordered X-rays, and I confess to be as shocked as she is. She has the back of a sixty year old woman. In reality she has had " slipped disk " at two different levels. Unmanaged this leads to a " sequestered disc " and pain and tingling in feet and legs ... 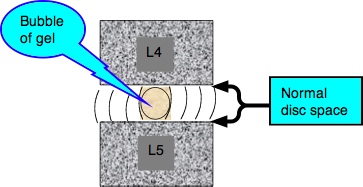 In the so-called "Slipped Disc" the central bubble of gel, called the nucleus pulposis in anatomical terms, has protruded through one or more layers of the "annulus fibrosis". 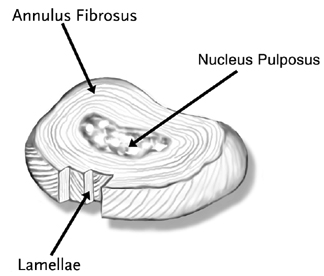 On X-ray, all that can be seen initially is slight loss of the disc height.

In chiropractic, we believe that it is vital to restore the herniated disc back to the nucleus. For me, it was a theory, a belief, unproven that you actually can reduce the bulge and prevent this loss of disc space with a spinal adjustment.

During my own life I have numerous episodes of slipped disc, lifting beehives, gliders, gardening, and most recently a very serious extrusion causing femoral nerve damage; a scan revealed a sequestration, or very severe prolapse.

Each time I have had Chiropractic treatment to reduce the bulge. During the recent episode, because of the seriousness of the sequestered disc, I had an MRI scan.

I expected to see serious flat tyres after all the slipped disks I've had; at least ten, and probably more. I was astonished to discover at 65 virtually no loss of inter vertebral space.

Loss of the gel in each episode of spit allows the vertebra above, L4 in her case, to settle lower onto the vertebra below if it's not reduced. 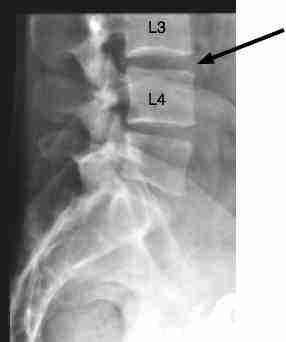 A flat tyre. A degenerated disc 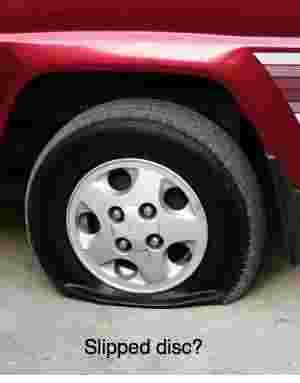 Eventually it's bone-on-bone and then arthritis.

Yes, this SLIPPED DISC SYMPTOMS case file is the back of a woman aged only 34. It's hard to believe. Not knowing the facts I would have guessed 60+. 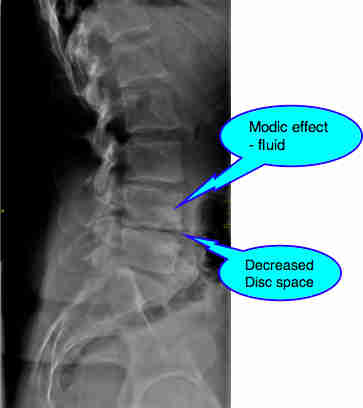 Can you see those white patches in the lower-most two vertebrae? In essence this slipped disc symptoms case file is a "sprain" of a tissue not unlike a ligament, and fluid builds up. Here we can see the swelling has seeped deep within the bone. It's called in radiographic jargon a Modic Effect. Hope not to see it on your report! Having said that, I have treated many, many patients with modic effects and they too get better with Chiropractic. 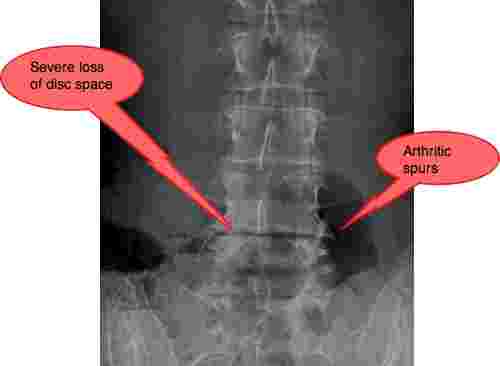 At chiropractic help we believe very strongly in taking attacks of acute low back pain seriously. What needs to happen is that bubble of gel that has leaked out must be restored to its proper position; otherwise it's lost for ever. Should it happen again, each time there will be further loss of disc space; then these slipped disc symptoms case files become more complex.

In addition, re-establishing the normal biomechanics of the joint is vital. Without movement, the fluids that slosh about inside joints are not refreshed with oxygen and vital substances like hyaluronic acid and glucosamine, essential chemicals that make up healthy cartilage.

Scientists have now produced heaps of evidence that this leads to what they call immobilisation Arthritis. That is why, for example, after an orthopaedic procedure on your knee, you will probably wake up to find your knee moving in a strange mechanical motorised device. This is the essence behind slipped disc symptoms case file.

At SLIPPED DISC SYMPTOMS case file, we want to stress ... 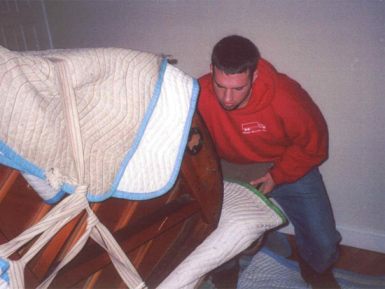 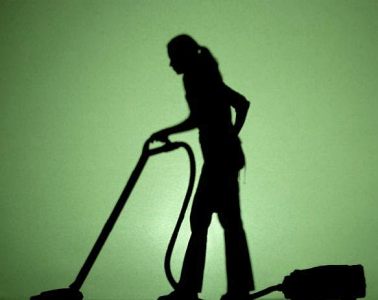 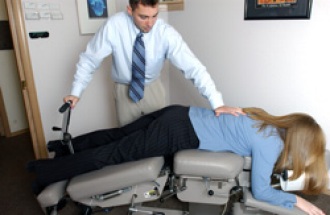 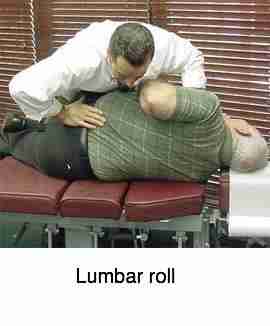 There is quite strong evidence from Harvard Medical School that a chicken bones extract that you can easily make in your own home will make an enormous difference to this degeneration; proper nutrition is part of the healing process. It contains the vital substances of cartilage, gelatine, glucosamine chondroitin sulphate, hyaluronic acid ...

At SLIPPED DISC SYMPTOMS case file we stress the importance of treating your back from every possible perspective. Chiropractic adjustments, rehab, exercise, common sense, nutrition ...

My Bernard Preston books are full of the inner story of people like Mrs van der S, the pain they experience and how slipped disc symptoms case files can and do ruin people's lives. The heartache, the joy, the mystery... spellbound! The spice... one woman with sciatica even told me that riding horses is much better than sex because... sorry, got to read the book! Just $2.99.

Like other serious diseases, for example Diabetes and heart disease, Low Back Pain has to come under careful and thorough management to prevent this degenerative change ...

Even this lady (67) is responding better than expected to Chiropractic care. I just wished someone started a SLIPPED DISC SYMPTOMS case file on her forty years ago.

This SLIPPED DISC SYMPTOMS case file is still in progress, and will be for the rest of Mrs van der S's life. It's going to take hard work on the part of her chiropractors, a solid relationship based on trust, honesty and respect, and a recognition on her part that she has a serious problem in the making.

I had a close relative, a lovely woman, who died at 42 after her seventh back operation. Literally. I don't want Mrs van der S to go down that road ...