The straight leg raise for sciatica was first named Lasegue's test some 200 years ago after the Frenchman of that name. 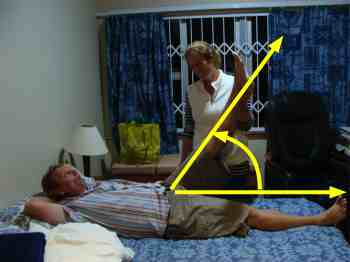 The SLR as it is often abbreviated has become the gold standard for a herniated lower lumbar disc though in fact it's not very specific; other conditions can also produce a positive Lasegue's test.

It is used for the patient suffering primarily with acute lower back pain that radiates down the back or outer side of the leg, sometimes affecting either the side of the foot, the sole and the great toe area.

Nevertheless, it's equally appropriate for the patient with low back pain only, or primarily leg pain.

It is done in conjunction with the Slump Test which is done sitting producing slightly different and sometimes mystifying results. Both should really be done, but a full and thorough examination of the patient in very severe pain will often worsen the symptoms.

For this reason, the Slump test for sciatica is often the clinician's first choice in the clinic; it is less traumatic to test the sitting patient.

However, on examining the patient at home, where he will almost certainly be lying down, Lasegue's is more usually the test done for sciatica.

An angle is used to designate at what level the pain begins; clinical notes should state clearly if the restricting pain is in the lower back, the leg, or both. Clearly a SLR of 10 degrees is more severe than 50.

The straight leg raise test is for sciatica.

If the patient is standing, he is asked to sit, then gently lie on his side, and roll onto the back. All of this can be very traumatic for the patient in severe pain.

The patient is then asked to relax completely; the test is done passively. The doctor raises the straight leg on the non painful side to establish what is a normal tight hamstring and calf. The doctor then lowers the leg gently; bending the knee a little helps to prevent sharp stabs of pain whilst the leg is being lowered, should the patient attempt to take weight.

The doctor then slowly raises the straight leg on the painful side; the patient indicates when and where the pain begins.

Most usually the pain in the back or leg begins at around 30 degrees, depending on the severity of the bulging disc. Lower lumbar discs tend to produce pain at a smaller angle.

The disc can herniate in one of two ways; lateral or medial to the nerve root. Clinically these are quite different conditions; they present in contrasting ways, and they respond to chiropractic treatment in diametrically distinct manners.

Both however take a minimum of six weeks for the annulus fibrosis to heal.

A intervertebral disc consists of two parts; an outer ring called the annulus fibrosis and an inner bubble of gel called the nucleus pulposis.

In the so called slipped disc, part of the nucleus pulposis ruptures through the intermeshed fibres of the annulus. It is in effect a sprain so swelling and inflammation soon begin.

For this reason the patient may go to bed at night with only slight discomfort after lifting a heavy cupboard, say, but in the morning may have a very strong straight leg raise sign and have grave difficulty getting out of bed; dressing may be well nigh impossible. 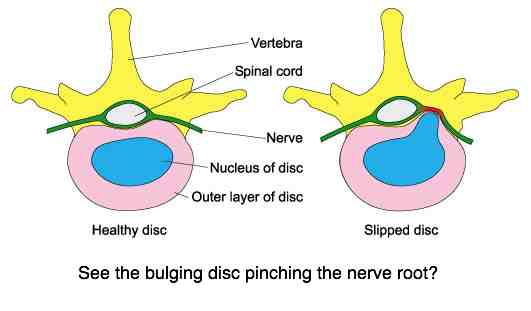 Chiropractic help attempts to treat the cause of the pain. NSAIDs for a broken limb is not the treatment of choice, though there may be inflammation. The bone needs to be splinted.

Medicine tends to view sciatica primarily as an inflammation, so the treatment most commonly recommended is anti inflammatory drugs.

Chiropractic on the other hand sees this as something mechanical, more akin to torn ankle ligaments or even a broken bone. The treatment is directed at reducing the bulging disc.

A positive straight leg test only confirms in about a quarter of cases that the patient has a slipped disc; other terms used might be bulging, protruded, prolapsed and extruded disc, meaning different things. However, a positive Braggard's test, in conjunction with a positive straight leg raise test is strongly suggestive of an injured disc. 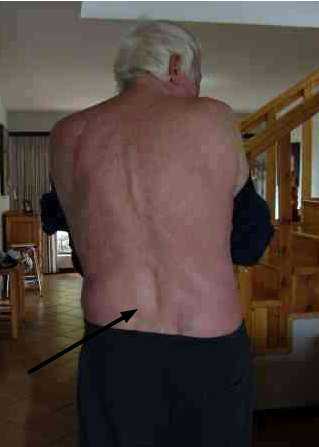 Strictly speaking, the word antalgia means leaning away from the painful side to relieve the pain; it's sometimes called the Pisa sign, after the famous leaning tower. The patient is quite unable to straighten up.

However, in the case of the medial disc, the patient actually leans towards the painful side.

Nerve damage often causes either numbness or weakness in the leg. If you are having difficulty raising your big toe, or the knee is collapsing on the stairs, or even if you have a distinct limp, then paresis, or semi paralysis of the muscle may be developing.

Our leg pain muscle testing page will help you work it out.