Low back pain and smoking are strongly correlated.

Today I have something different. Every lover of cigarettes and pipes knows what they are doing to their bodies so I tell new patients once, and then hold my tongue.

This week, in stark contrast, we look at three patients from the clinic, one of whom I have not seen for 18 months.

She did not respond well to her doctor's pills. By the time she reached my clinic she had fifty percent numbness down the back of her thigh and calf, and Braggard's test was strongly positive in both legs at naught degrees. That is an ominous sign.

She improved nicely with chiropractic care for the first two weeks, reaching 60 percent better and then, for no obvious reason, had a setback. Now she has leg pain.

That disc just does not get enough oxygen to heal in smokers. And when you have a toddler, it is just plain difficult. Surgery is coming up methinks.

"My wife has just been diagnosed with primary lung neoplasm which has metastasized to her spine, sternum, both shoulders and pelvis. The next medical appointment is in two days, and we expect the chemotherapy to start then. They are not sure about radiation yet. Meanwhile the pain the last two nights has been horrendous but with good days. She called the doctor, who has prescribed another pill, and will visit tomorrow.

About a year after we saw you she began to cough a lot; initially she had a chest x-ray, followed by a scan. In retrospect the shadow seen was misinterpreted; a followup three months later was conclusive."

A second email stated that the doctor increased her medication five times. That set her into morphine toxicity, and he thought he was losing her, but she recovered and now has much less pain.

Did I miss a tumour in the shoulder?

Or did that metastasis arrive much later? We will never know.

Low back pain and smoking is the largest factor in failed back surgery too. 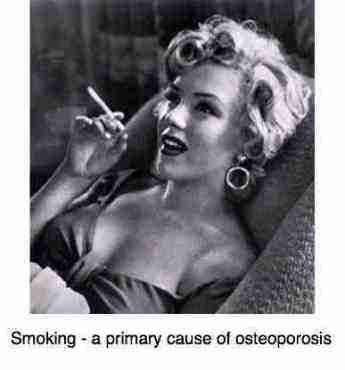 Smoking is the greatest risk factor in lower back surgery. It is also huge in chiropractic care, though that is unresearched. Add to that another complication; the young woman also has a toddler, and you have grave difficulties, be it as a DC or surgeon caring for the lumbar spine.

So, it is your call. Are you going to stop before the back operation, lung tumour, osteoporotic fracture and emphysema, or afterwards?

And now I have an appeal. If you are a smoker, and have small children, please make sure their clothes are clean smelling, and do not light up on the way to the school. That is not something too hard to do for your kid's sake.

My granddaughter, aged six, reported this story to me. A new girl joined their school this quarter but, within a few days, when she walked into the class, the whole class grasped their noses. She stank of cigarette smoke; and no one befriended her. Friday was the last day of the quarter; the new lass declared she was leaving because everyone was so unfriendly.

Not unfriendly, my granddaughter protested, but they could not abide the smell of her clothes. Kids are perhaps refreshingly frank. Adults just tolerate the stink.

Research done in Sweden in which autopsies of the lumbar arteries were made, found a very high correlation between atheroslerosis, smoking and a long history of lower back pain.

Smoking primarily is the cause of atherosclerosis, but there are other causes. The inner lining of arteries becomes inflamed; in this instance it is the blood vessels that supply the lumbar spine that were autopsied. The vessels become narrowed and there simply is not enough oxygen and nutrients reaching the spine. Consequently, if you slip a disc, it simply does not heal properly.

I know that quitting is the very devil. This page is not about preaching you to you concerning the evils of smoking. But if you are suffering from significant lower back, and the pain starts to radiate to your leg, then either give up smoking completely and totally right now, or face the fact squarely that within weeks you will probably go under the knife.

And even then, smoking is the biggest risk factor for failed back surgery. Face the fact that not only your chiropractor may well fail in the treatment of your low back pain, but the surgeon may well frustrated too. Then it is a second operation, and possibly a third.

Intermittent claudication is another condition that is directly caused by smoking. The temptation with leg pain is to assume that it is a pinched nerve, but sometimes it is an artery that is pinched; from the inside, blocked with an antheroma.

Leg pain is a not uncommon complaint at the chiropractic coalface. There are many causes but one which often mystifies is a condition in which the artery supplying the legs is partially blocked.

The result is leg pain associated with exercise and relieved by sitting for a few moments. If there is associated but unrelated lower back symptoms then there is a temptation to jump to conclusions and assume it is sciatica. Enjoy this short story on the subject by chiropractor Bernard Preston. 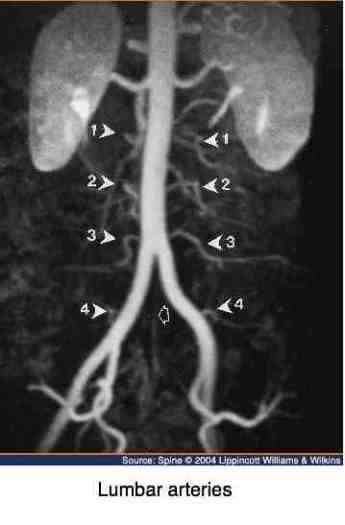 Intermittent claudication is a relatively uncommon complication of smoking; one of the arteries supplying blood to the legs becomes partially blocked. There's enough oxygen for the muscles when the person is at rest but, as soon as they exercise, excruciating pain begins in the leg, starved of sufficient oxygen. As soon as they stop the activity, the pain recedes.

Because the same arteries supply the pelvis and hips, for example, serious disease of other organs, starved of oxygen is likely to occur too.

A simple test for intermittent claudication exists, though the diagnosis is often made simply from the history. Are the pulses in the ankle and foot present?

If you have an aching leg with exercise, and perhaps no lower back pain and smoking, then the place to start is an examination of the pulses.

Recent research into the so called Coronary Artery Risk Development in Young Adults has found, particularly in women, that those eating up to nine coloured foods were forty percent less likely, twenty years later, to have plaque lining the arteries.

Or, those eating three or less coloured fruit and veg had 40% more atherosclerosis leading to lowered blood flow, increased blood pressure and decreased oxygenation of the tissues.

Leg ache is can be caused by many things; in the chiropractor's office it is usually a sciatica or damaged femoral nerve; then the stretch tests, like that of Slump will be positive.

But, in the above instance, it's starvation of oxygen that is the spoke in the wheel. Leg pain induced by exercise, and relieved as soon as you stop the activity.

The key sign is no palpable dorsalis pedis pulse. Low back pain and smoking, with an aching leg are strongly correlated.

Most folk suffering from low back pain will recover whether you are a smoker or not. The trick is to recognise and acknowledge ominous lumbar signs when they appear; ignore them and the situation changes. What appeared to start out as something routine has suddenly become serious; do the ostrich trick and now you have a high risk of lumbar surgery.

The chiropractic profession is committed to the health of your whole body which is why we stick our necks out and risk addressing subjects like smoking, obesity and the dangers of being a couch potato.

Yes, we lose some patients when talk about low back pain and smoking; but if we can save just 10% of our patients from the ravages of these habits, it's worth the breath.

It is painful, I know; at the end of the day we live and die by our choices. Do not take it out on your chiropractor, or medical either, when they choose to raise such issues. They do it because they care; it would be much easier to look the other way, and give you pills.