Lateral disc herniation creates something of a dilemma for the DC.

Far lateral prolapses and extrusions are an enigma that often baffles the chiropractor and medical doctor alike. Why?

Please accept that this may be a bit of neuroanatomy that may be beyond the interest of the average patient, but what is important is that the herniation is one level lower than that expected.

Why is that important? Because, with 33 years of examining patients with lower lumbar back pain, I can tell you that is often not clear whether the herniation is a L4-L5 Lumbar Spine lateral disc protrusion, or L5... Or L3. Double hernias are not uncommon too just to add to the confusion.

Usually when there's sufficient wear and tear at a particular level to rupture the disc, there's also degenerative change at several other levels, each of which will be contributing to the mayhem.

Take this scan for example (see Femoral nerve damage ... for more details, if interested): Only seen on the axial views is that there is a very large extrusion from the L3-L4 disc, part of which has sequestered posteriorally into the spinal canal, but just look at the L4-L5 disc.  Both discs would be painful.

aka a FAR lateral disc 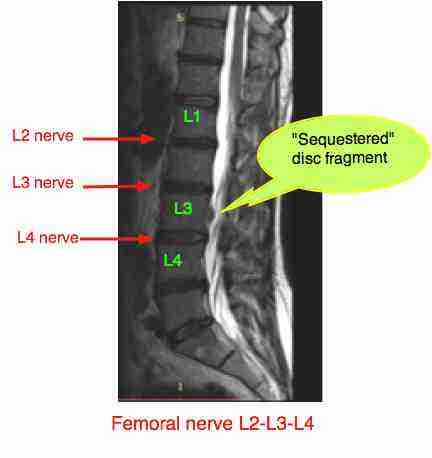 And, because the "far lateral" is far beyond the usual cut of the MRI, it is often missed by the radiologist, and a 'normal' report is sent to baffle your chiropractor and your doctor. 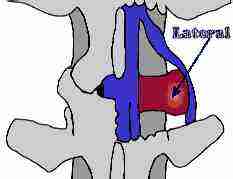 Most herniations occur into the spinal canal (usually contained behind the Posterior Longitudinal Ligament) or into the inter-vertebral foramen (IVF) where the nerve exits. However the (Far) Lateral Disc Herniation ruptures beyond the foramen, and traps a higher nerve than expected.

Because the Lateral Disc Herniation is less common it will have your chiropractor scratching his/her head. You see, the pain pattern in your leg with a the lateral disc doesn't correspond to either his findings, or what may or may not be seen on the X-rays and scans. It just ain't following the proper radiating pain that it ought!

This is a (far) lateral disc herniation.

This next diagram shows the more usual pattern of a Postero-Lateral disc herniation, not to be confused with the the above (Far) Lateral disk protrusion. See how it gets a quite different nerve?

Pain and tingling in the leg, numbness and weakness. The Slump Test for sciatica  can be done at home to test for a pinched nerve.

Low back pain is the most common and costly work related injury. The huge costs involved come from the relatively small number of people (but still a very large number of workers) who go on from an acute episode to chronic disability.

How can you know if this attack of lower lumbar back pain is going to go away, or become a nightmare?

A 2009 study from the University of Washington of 1885 workers with lumbar disc protrusion injuries, has come with some interesting facts:

CHIROPRACTIC HELP FROM THE COAL FACE

Mr Hanisch is a 45 year-old plumber who lifted a heavy washing machine up a narrow staircase. He felt something give in his back and the next morning had severe lower lumbar back pain. Turning in bed was extremely painful, he couldn't put his socks on, and a good smoker's morning cough gave him a vicious stab of pain in the back. Within a few days he felt pain radiating down the side of the leg and towards the great toe.

There were 4 sites of pain; Lower back radiating to the side of the thigh, lateral calf and the great toe.

Sitting and standing became very painful, and he walked with a limp because of the weakness that developed progressively in his foot. He tripped several times, aggravating the condition further, because his toe didn't lift normally in the swing phase of his gait.

By the time Mr Hanisch consulted me four months later, he had difficulty raising his great toe off the ground and the side of his lower leg and the top of foot felt numb; using a pinwheel, he said the prickle was 40 percent less. And the medial hamstring reflex was noticeably diminished.

So far there's nothing unusual. This describes very typically a L4 to L5 disc herniation. But the MRI was negative, and eventually he was sent back to work by the company doctor. Up to a point I can understand that; there is strong research showing that a man off work for more than six months is most unlikely ever to return. So, he was sent back to work. Only, he couldn't do his work as a plumber.

For two weeks I made the wrong decision, following my neurology rather than the clinical examination, and adjusted L4. A mistake, and he didn't progress.

To hell with it. The jammed up joint is L5, Mr Hanisch, I am changing the treatment.

After the first adjustment of L5, he felt a slight bit of relief, and I could raise his leg a little higher at the next consultation, when I did the Slump Test.

It was several months before the pain and weakness in his leg returned to normal, but after the rehab exercise program, he was able to return to work. A little wiser, he now gets help with heavy lifting.

An unexpected benefit was that he agreed to quit smoking. His doctor had often tried to persuade him with grave announcements about lung cancer and heart attacks, all of which he ignored. But when I told him his back was unlikely to heal with my treatment, and he would end up in surgery if he didn't quit, he made the noble decision.

How do I know he had a (Far) lateral disc herniation? Frankly I don't. The MRI's of these Far Laterals are usually negative, and the only way to confirm it with is with a myelogram or surgery, both of which can have nasty side effects. However, adjusting the level below that expected is what reduced the prolapsed disc.

Can chiropractic have nasty side effects? Yes, indeed, though research consistently reveals that it is much less frequent, and the chance of going on to chronic disabling pain with a condition like a Lateral Disc Herniation is 5/12 less likely that if you start with a medical doctor.

Have a moment of sympathy for your Chiropractor who is dealing with Lateral disc herniation. Surgeons too need a streak of stubborn boldness to get on with what needs to be done with the patient in severe pain, though his patients are under deep anaesthesia.

"Boldness be my friend."

Each time you have an attack of acute low back pain, if it's associated with pain when you cough, sneeze or bear down on the toilet, you have likely lost some of the gel in the disc. This is even more so, if you go into the "leaning tower of Pisa" posture, or have pain in the leg. You are well on your way to having a 'flat tyre'.

Think prevention, like back exercises every morning, and some common sense when faced with heavy lifting if you want to avoid lateral disc herniation and the threat of lumbar spinal surgery. The 50 percent less pain rule is vital ...

If you have pain and tingling in the feet and legs...

Please remember that one size definitely doesn't fit all. Lumbar facet exercises are not entirely appropriate for a disc injury - don't pull both knees to the chest simulaneously.

Or in normal jargon, could you have a short leg? Leg length inequality research confirms that it causes not only hip and knee arthritis, but also lower lumbar back pain. It probably untimately is also one of the causes of lumbar stenosis, and probably lateral disc herniation, though is unresearhed. Leg length inequality and low back pain are now confirmed to be strongly associated. Not responding to Chiropractic? Has your Chiropractor considered a short leg?