Taking dual anti-inflammatory drugs is very unwise since new research proves it is a significant cause of poor general wellness.

Abstracts from the rheumatic and arthritic journals always make interesting reading; what is medicine saying about itself? In the January, 2008 edition, researchers remark on the undesirability of using more than one drug to manage pain; these are the reasons why.

They state that it is well established that serious diseases of the bowels may be caused by taking more than one non steroidal anti inflammatory drug.

Further they hypothesized that taking of more than one NSAID would affect not only the gastrointestinal tract but also be associated with a general poorer quality of life; this is what they wanted to research.[1] 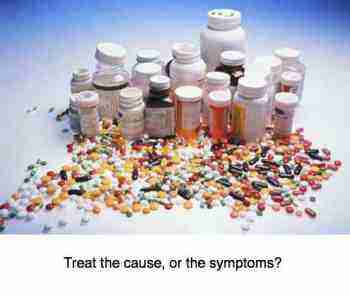 There are better ways to tackle the early symptoms of arthritis.

So, it is well established that taking anti inflammatory drugs can cause serious diseases of the gut, but little was known concerning the use of more than one NSAID.

These medications are used to reduce inflammation and pain, especially for joint conditions. Arthritis of one form or another affects at least 30 percent of all adult Americans; worse, in the near future at least 20% are likely to experience significant disability and limitations in their daily style.

These inflammatory and degenerative arthridites are the chief cause of such disability.

Non steroidal anti inflammatory drugs are one of the most commonly prescribed medications worldwide. Among individuals with arthritis, almost 30 percent report daily use of over the counter NSAIDs. Given the availability of both sources, many patients may be taking more than one.

How many are they swallowing, you may be asking? This despite the fact that it is now well established that taking multiple anti-inflammatory drugs often leads to adverse events, including serious gastrointestinal bleeds.

The researchers used the following methods. Patients from a particular medical group who confirmed that they took more than one anti-inflammatory drug in a period of six months were interviewed.

The results of their research is as follows. They discovered that 26 percent of the anti-inflammatory population were taking more than one NSAID; both might be on prescription, or one or both over the counter. For example, swallowing both aspirin and ibuprofen was not uncommon.

More important, taking more than one anti inflammatory drug was definitely associated with a worse health related quality of life. One quarter of the participants were suffering from chronic lower back pain and a half had either rheumatoid or osteoarthritis.

The net result of their research was that taking more than one anti inflammatory drug was an important independent predictor of poorer general health by a massive 351 percent.

Their conclusions were as follows.

Patients often self manage their pain in order to improve their life style by taking two or more anti inflammatory drugs. But, by attempting to gain only symptom relief for their conditions they were placing themselves at a greater risk of complications and a poorer quality of life.

Worse, health providers were seemingly unaware of the risks their patients were taking.

Finally, taking high doses of anti inflammatory drugs, and especially more than one, is a vital concern for both doctors and their patients' overall safety.

Here are a few comments from researcher Dr Dan Murphy.

Non steroidal anti inflammatory drugs are used widely and are readily available, both over the counter and by prescription. These medications are associated with many side effects, including some that are catastrophic; for example gastrointestinal bleeding, kidney and liver damage, strokes and myocardial infarction.

The maximum dose is defined as that amount of the drug above which you will almost certainly suffer harm from toxicity. And in any case, there is no increased pain relief by exceeding the maximum dose, so it's just plain dumb.

Which toxic side effects are most likely?

The exception that proves the rule about dual antiinflammatory drugs is morphine. It may be taken in combination with other medications but consider the following.

Morphine also causes severe constipation, amongst its many nasty side effects. By sedating the nervous system to reduce pain morphine also drastically decreases the nervous input the muscles of the bowel.

The solution to that problem isn't yet more medications with even more side effects, but Nature's simplest remedies. Read about beetroot constipation and this quick constipation relief page and for more information about SOLUBLE fibre and its effect on the colon.

Arthritis in lower back

Arthritis in lower back can absolutely ruin your life... but, there's hope with Chiropractic! ARTHRTIS IN LOWER BACK ...

FROM THE CHIROPRACTIC COALFACE

After seven years I have just returned to my native South Africa. Yesterday I had lunch with a dear friend and patient who has suffered for years with her neck and back. Well, I ate. Not able to find another chiropractor to her satisfaction, she started taking Ibuprofen on a regular basis... three days ago she developed a jet-black stool: digested blood from a gastic ulcer. She nearly died... today she goes for scopes... at all costs avoid dual anti-inflammatory drugs.