Anticholinergic side effects would include some of the following.

This page was last updated by Dr Barrie Lewis on 7th March, 2020.

What is Acetylcholine? (ACh)

Astonishingly, 50 percent of the American population are taking Anticholinergic drugs, which are designed to counter the effect of Acetylcholine.

Acetylcholine (ACh) is a neurotransmitter used widely throughout the brain and in fact the whole body. In order for information to get from one nerve to another (across what is called a synapse) the Nervous System uses chemical transmitters. Acetycholine is required to 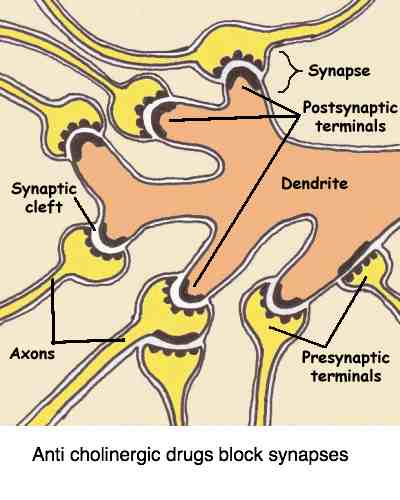 In a study reported in the British Medical Journal scientists, commenting on anticholinergic side effects did cognitive tests on a group of persons over 60 who started taking Anticholinergic medicines like sleeping tablets. None at the beginning of the research showed any signs of dementia.

Only two years later, fully 80% tested poorly when it came to such cognitive tests as

All of these are anticholinergic side effects of the medication they were taking. These drugs block the neurotransmitter acetylcholine.

If you are suffering from early symptoms of dementia, do not assume that the end is nigh and assume you have it; check your drugs first.

The chief cause of confusion and disorientation in older folk is the side-effects of medication. So says Dr Daniel Levitin, a leading neuroscientist.

More research about anticholinergic side effects

Diminished glucose metabolism and a reduced cortical brain volume were measured, as well as a poorer performance on the trail making test[1].

We recently reported that 12 months of once or twice weekly resistance training improved selective attention and conflict resolution compared with a balance and tone program (BAT) among 155 community-dwelling senior women.

"Regular use of aspirin, NSAIDs, and acetaminophen can increase the risk of hearing loss."

Are you taking sleeping tablets, sedatives, anti-anxiety and anti-depressent medication? Antihistamines, Codeine, Anti-inflammatories? Blood thinners. And many others.

Are you getting forgetful and foggy-brain? Have a good chat to your pharmacist.

Fully 50 percent of Americans are taking these drugs. Their anticholinergic side effects may be ruining your brain.

Johns Hopkins Medical university states that there are 113 000 deaths per year in the USA alone due to side-effects of drugs and medication errors in hospitals (reported in Journal of the American Medical Association). Are we surprised? This makes drugs the fourth leading cause of death in the USA after heart disease and neoplasms.

“The more serious the illness, the more important it is for you to fight back, mobilizing all your resources; spiritual, emotional and intellectual; and physical too.”

In Alzheimer's disease, nerves in the brain lose their connectivity with other nerves at the synapses. Soon they atrophy and die, and the brain actually shrinks, affecting memory, thinking and ultimately behaviour.

Anxiety and difficulty making decisions are amongst the first signs.

Ironically, the medication of choice is a pro-cholinergic medicine to increase the supply of Acetylcholine.

Chiropractic has many positives. Perhaps few are more important than we keep our patients off these Anticholinergic medications. And because of our emphasis on movement, the Alzheimers and Exercise link kicks in. Medicine does a fine job of crisis care, but when it comes to the day-by-day management of your life, consider Chiropractic First. ALZHEIMERS AND EXERCISE ...

There is a strong correlation between exercise and cholesterol too. The more you exercise the lower the dangerous LDLs and VLDLs cholesterol in your blood stream. In fact, it is possibly the lowering of cholesterol that is positively affecting the onset of senile dementia and Alzheimers. Get those walking shoes out.

The drug Acetaminophen is the leading cause of acute liver failure in the USA. Because it is contained in many different over-the-counter drugs (like Tylenol, Anacin, Excedrin and many flu and cold medicines), and prescription drugs, Americans are seriously overdosing on Acetaminophen.

This has directly resulted in 458 deaths per year recently.

FDA recommends not mixing Acetaminophen-containing drugs, and to avoid them if you drink alcohol or have a liver condition. The toxic effect is worsened in the presence of anti-cholinergic drugs.

Is not worth considering chiropractic first rather than risking these terrible anticholinergic side effects? 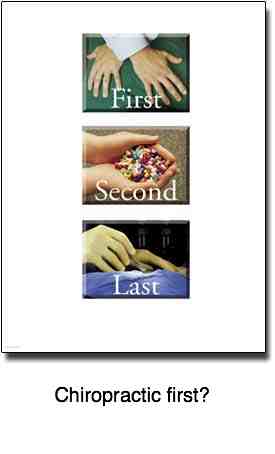 "The world is indoctrinated in medicine. People are born in a medicine cabinet and grow up in a drugstore. They have been brainwashed, hypnotized, mesmerized and drugged to believe their life-force comes from the Outside-In. Chiropractic must un-brainwash them and demonstrate that health comes from Inside-Out."

"Inside Out" is a short story you'll love; type the phrase into the Site Search function above.

Drug companies are becoming more and more successful at turning us all into drug addicts - Ritalin is high addictive. Today over one million children in the USA are on Ritalin, for Attention Deficit rather than Dyslexia because so many children have symptoms of both... as chiropractors we believe the alternatives should be considered... MORE DYSLEXIA ...

At a personal level, I am so grateful I lived in an era before medication of children became the norm.

I tell it all at "attention deficit Bernie." Type it into Site Search in the main menu above.

"In all affairs it is a healthy thing, now and then, to hang a question mark on the things you have long taken for granted.

A 53-year old patient with a history of a suspected mild heart heart attack was placed on Warfarin, a blood thinner. Last year her doctor insisted she had the flu shots to make sure she did not get the flu as it might overstrain her heart. Within three days she became extremely ill, which lasted over a month.

This year? She started getting some flashing lights in her eye, signs of a retinal tear. The ophthalmologist confirmed a small tear and advised routine laser therapy. But he did not ask her, and she did not tell what drugs she was taking; the laser surgery caused massive bleeding behind the retina because of the anticholinergic side effects of the blood thinners that she was taking, killed the optic nerve, and she is now stone blind in that eye.

Personally I would virtually never take the flu shot. In one year Medicine admits that it caused a doubling of the rate of a very serious neurological disorder called Guillian-Barre Syndrome.

That year the flu shot killed more people than lives saved. I wonder how many other diseases it also caused? Drugs are dangerous.

Scientists at the Laboratory for Neurosciences in Bethesda looked for a link between the amino acid HOMOCYSTEINE (produced from the metabolism of the protein in meat) and the vitamin Folic Acid.

They found that mice deprived of Folate had high levels of HOMOCYSTEINE and were particularly vulnerable to neurotoxins. Then, when the mice were fed Folate, their homocysteine levels dropped and they were able to repair the neurons damaged by the toxin.

As we've seen the neurotransmitter ACETYLCHOLINE is the brain's memory molecule.

SAMe, a vital body chemical, is produced from HOMOCYSTEINE. SAMe helps produce and activate the ACETYLCHOLINE in your brain from CHOLINE, an important foodstuff found in eggs and organ meat. This process requires high levels of anti-oxidants like ZINC and the B VITAMINS and FOLATE.

This is complex biochemistry. Do not fuss over these names. But do recognise that anything that lowers ACETYLCHOLINE in your brain will inhibit your short-term memory. That could be Alzheimers or old age dementia.

Take these Anti-acetylcholine drugs on a regular basis, eat a diet poor in anti-oxidants and B vitamins and folate, and you are setting yourself up for the early demise of your brain. In short, you'll lose your marbles! Read more about ANTICHOLINERGIC SIDE EFFECTS at ...

What is betaine, and its precursor choline, is a very important subject for all those suffering from anticholinergic side effects. It's the vitamin like substance involved in the methylation, read degradation, of toxic homocysteine.

Rather we should be looking at procholinergic foods that will enrich our memories, better control muscle contraction including the heart, and improve the digestion of our food.

An understanding of betaine, and choline food sources is so important for all of us, but especially those suffering from anticholinergic side effects.

There's no better place to start than an egg poached on a bed of beet greens or spinach; a rich source of betaine and choline.

"What is betaine" is a subject all those who have chronic pain and inflammation should understand; type the phrase into the Site Search above in the main menu. 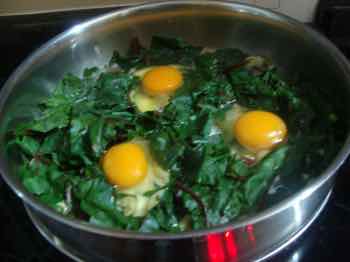 Use "free range eggs" if you can find them; serve it on a toasted slice of bread made from 100% healthy flour; it's hard to find, and I chose to bake it myself. It takes only five minutes every morning. Find out more for my take on the subject by typing the phrase into the Site Search function in the main menu above.

Remember a life without medication should be the goal of each and everyone of us; if you are suffering from the ravages of anticholinergic side effects then it is time to stop and consider before you lose your mind.