These are the signs to look out for. Boys around five years old who start to walk in an odd manner and begin complaining of discomfort in the upper leg; but girls get it too.

Because, undetected, it often leads to the first full hip replacement in the third decade; it's imperative that both parents and doctors take children who develop an odd gait seriously. 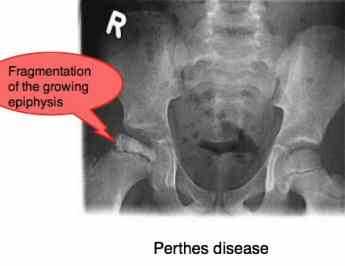 This is not growing pains, which in my opinion doesn't exist, in any case.

Please, do not neglect your child with a limp. This is a very serious condition which, if not caught and managed in its early stages, leads to multiple total hip replacements, the first often around aged thirty; and a ruined life, no exaggeration.

Early detection is absolutely essential for the treatment to be successful. And because it starts insidiously, in its early stages Perthe's disease is often neglected. By the time everyone has woken up, it's too late.

If your child is limping, don't just say: "It'll get better, Mummy will rub it."

"I have had Perthes' disease and now have a cyst in the hip joint. I am in severe pain and on loads of analgesics; at only twenty-seven what options do I have?"

Who gets it? In one sense the growing pains diagnosis is correct. This condition occurs in the growing child, usually around 5 years old, but it can occur earlier and much later. I have seen boys around 12 developing Perthes.

It is more common in boys, but oddly the prognosis is worse for girls.

Neglected, the first hip replacement may occur before your child turns 30 years old, and a wheelchair in the fifties is definitely on the cards. I have two patients in exactly this scenario. A ruined life, I can assure you. And needlessly so.

A prophet of doom? Not so, because carefully and correctly managed, this is a very treatable condition. But it must be detected early. The alternative is severe, premature hip arthritis.

What is Perthes' disease? It's a serious childhood condition characterised by pain in the groin and a limp. Never let someone tell you that it is growing pains before a proper assessment has been made.

It was named after Georg Perthes. So it's Perthes' disease, not Perthe's disease.

All tissue requires a nerve and blood supply. In Perthes' Disease, a loss of the blood supply to the growing ball of the femur (the hip) occurs. No one is quite sure why this happens. It could be due to trauma, a fall for example; we're just not sure.

Without its blood supply the growing 'epiphysis' dies, with fragmentation and resorption of the bone. Compare the right and leg hips in this growing child. Notice how it's also affected the roof of the hip joint, the "acetabulum". Compare right and left sockets.

The limping child should always be professionally assessed unless he has stubbed his toe, or something equally obvious.

The first symptoms are groin and thigh pain and the first "sign" is a distinct limp.

Often the pain is written off as growing pains; medically this is thought to be neuralgic but in my humble opinion, so I call it growing pains chiropractic they are caused by hypermobile joints.

The first signs are pain in the hip, anterior thigh, groin or knee, reluctance to place weight on that leg, and a marked limp. Usually there was a history of minor trauma, the sort that every sporting child would experience regularly. Occasionally there is a history of cold, gastric upset or bladder infection, and a mild fever, but not necessarily so.

Ranges of motion may be slightly or severely affected.

X-rays are negative, or the changes are so subtle that they are usually only recognised on review.

There is a 3% chance that your child will experience transient synovitis in his/ her first fourteen years, boys/ girls: 2 to 1. There is a 20 times risk of a second episode after the first has healed.

Treatment: Bed rest alone, until pain free and a full range of motion of the hip. In some cases, traction. Three days to two weeks.

Initially, the hip was kept in extension, however the Malmo study suggests this aggravates the course of the condition and is more likely to cause a loss of blood supply, avascular necrosis and true Perthes' disease. The best position appears to be that favoured by the child: usually about 45 degrees of flexion and slight external rotation.

In a study done in Malmo, 3.4 percent of these cases progressed to full blown Perthes' disease, many of them those kept in extension with traction.

In short, only a small proportion of children with acute hip pain will progress to a Perthes' disease, but all cases should be immobilised with bed rest in the most comfortable position, and non weight bearing until pain and range of motion have returned to normal.

The diagnosis is made from an xray, but in the early stages of the disease, the radiographs may be normal. If the age and symptoms fit, I assume that it's Perthes' Disease until confidently proven otherwise. It's such a serious problem, that it's better to assume the worst, and be wrong, than vice versa.

The most important part of the treatment of Perthes' disease is getting the weight off the leg. Crutches should be rigidly enforced. You don't mess with this condition.

Then gentle exercises of the hip are important. Movement of the joint brings fresh nutrients and oxygen into the capsular fluid, and removes waste products. This is always important for every joint, but even more so when the blood supply to the hip has been temporarily interrupted.

Your chiropractor will check the sacroiliac joint, which is probably best adjusted using an activator, and use various soft tissue techniques on the muscles of the hip, and the capsule.

Personally I recommend an orthopaedic consultation as well. Two heads are always better than one. Usually bed rest, a splint and even traction are recommended.

Good nutrition is vital at this stage. No junk food, and plenty of salads and fruit. Omega 3 from fish oil or flax seed and chicken bones bouillon.

Perthes disease? No, of course, Perthes' Disease, but search engines are illiterate and don't like the apostrophe.

After ranges of motion have returned to normal, and the child is no longer reluctant to weight-bear, a full rehab programme is recommended, including these hip exercises.

Hip arthritis, and severe degenerative joint disease, often before thirty is the result of a missed diagnosis.

Pain and disability is an increasing problem in our society; it's complex but, detected early, there is much to be done to prevent the serious and very costly affects of hip arthritis.

Perthes' disease is but one cause of this nasty condition; a short leg is another as are hip dysplasia and impingement syndromes.

Groin and thigh pain are a limp are the hallmarks of Perthe's disease.

There are in short many causes of groin, hip and thigh pain; it's in the limping child where immediate action is vital.

In the adult it's less important that treatment be promptly initiated as it's often has a slow and chronic nature. Acute pain like this hip and thigh pain case should not be allowed to become chronic; early care is often miraculously successful.

Deal with a small problem before it becomes a major debilitating disease.

Have A Great Story About a visit to the Chiropractor?

Please only submit your question from a computer. I will not answer anything written in smartphone grammar.

I'm not looking here for funny stories. That we'll find a place for elsewhere, and you can find an abundance of them in my books at Bernard-Preston.com. James Herriott genre books.

Here I'm looking for things that you particularly love / hate about a visit to the chiropractor. Share it! If we get too many, and we probably will, we'll split them.

Are there things you hate about a Chiropractic consultation? Let's hear about it. Hopefully even more stories about things you love.

You see, we Chiropractors can learn from your feedback, both positive and negative.

Click below to see contributions from other visitors to this page...

Perthes hip We first discovered our son limping when he was about 3 yrs old diagnoses was Perthe's disease. Then we discovered Dr Robert Salter at …

Your website, the purple banner, love your site but.... Not rated yet
It is so poorly laid out. You use black text and have a dark purple border on the left. You can't even use your website during daylight hours, even on …