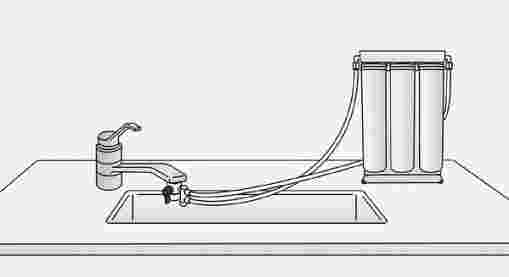 Drinking water of a high quality, without toxic chemicals like fluoride and pathogens like E. Coli is perhaps the greatest factor in improving human longevity. Typhoid and cholera alone have taken tens of millions of lives.

More difficult today is the affect of chlorine and fluoride and microplastic particles.

What does the research say?

It goes without saying that water is important; we cannot live more than a few days without it. But just how much do we need?

And what about quality? Is the water from the tap in Chicago the same as the stuff that I drink in Holland?

Decidedly not, most Americans would be the first to agree. Four years of living in Illinois convinced me that they pumped theirs straight from a sewerage farm called Lake Michigan whereas the Dutch are masters of everything to do with water. They have to be as 60 percent of the Netherlands lies beneath sea level.

So, if you are seriously interested in healthy living, and the quality of your water is shit, sorry about my misguided sense of humour, then you might think of a filter; and an UV irradiator.

This page was last updated by Dr Barrie Lewis on 10th September, 2019.

Drinking water weighs a few myths and suggests some cheap and nourishing fruity teas that you can make at home.

Could you for example, enjoy just one glass in the morning and another mid-afternoon? It is disturbing and astonishing how many people drink absolutely no water unless it is sweetened and flavoured.

The wisdom of the ages suggests that we drink too little. It is probably correct.

But the anecdote going back some eighty years, started by a medical doctor who suggested we should be swallowing 8 glasses per day turns out, according to new research, that it was simply his opinion, and not based on any solid evidence.

In short, like many medical stories, it is pure myth.

There is little evidence that drinking the recommended 8 glasses of water per day improves your well-being, say scientists from the University of Pennsylvania.

Kidney experts, Drs Negoianu and Goldfarb, explained that drinking extra water may be a waste of time. Google the Journal of the American Society of Nephrology to confirm this statement.

Persons suffering from certain specific diseases do benefit from more water, as it clears certain substances like urea and sodium, and this may apply to ordinary people, but there is no proven evidence.

It has been claimed that consuming lots of drinking water clears toxins, keeps organs in better condition, improves skin tone and prevents you from putting on weight. The researchers say there is not one published study proving the benefit of drinking so much water for ordinary healthy people. It’s probably a myth.

In chiropractic we recommend everyone drink more water, so that tissues remain fully hydrated. Good clean water, not the SH-1-T that comes out of sewerage plants like Lake... oh, dear, better be careful,  I may be sued! That doesn't mean you have to drink an extra 8 glasses a day. Personally I drink at least 5 glasses of water a day, and numerous cups of very weak tea with fruit. But that too is just an anecdote, without any real justification. I simply like it.

It is well known, of course, and proven, that athletes should be drinking water; but plenty more water? Amongst other things drinking too little water makes an athlete's skin tight and ‘dried out’, but there is not one study confirming this need for ordinary people.

More controversial, is should that water be loaded with sugar, glucose, fructose... simple sugars.  Prof Tim Noakes, MD, in the chair of sports and exercise at South Africa's premier Cape Town University has come full circle from being an advocate of "carbo-loading" to a low carb fan.

Veteran of some 70 marathons his latest book, Waterlogged, concerns overhydration in the athlete. He advocates: "drink when you're thirsty."

(I'm a Kindle fan, but frankly livid that Amazon has joined the ebook bandwagon. The kindle edition is MORE than a paperback, with zero expenses associated with distributing and selling books. Pure greed. Throw in the postage and your ebook is marginally cheaper) 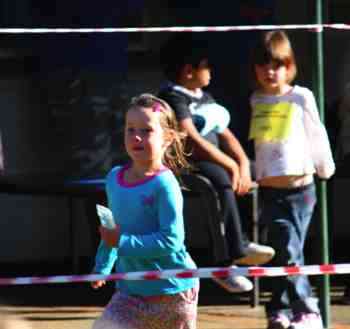 Should we be carrying waterbottles when running? Noakes says, definitely NO. Another myth is that drinking more water helps headaches . One small trial did not produce statistically significant data. There is of course plenty of research proving that a chiropractic adjustment will help your headaches! Well, 70% of headaches come from the upper neck.

"We must be skeptical even of our skepticism."

For some solid ideas from our free weight loss programs ... click here. Step number one is to completely and utterly delete the word diet from your mind; none of them work; rather learn about the meaning of glycemic index and then you'll get the pounds off naturally and normally.

As famous scientist Carl Sagan said: Absence of evidence is not evidence of absence. We simply do not know; for sure, that is.

Absolutely don't start your children on the notion of colas and artificially flavoured drinks stuffed with sugar/sweeteners and chemicals. Drinking water, weak teas and the drinks suggested above are just as fine for your children as for you. 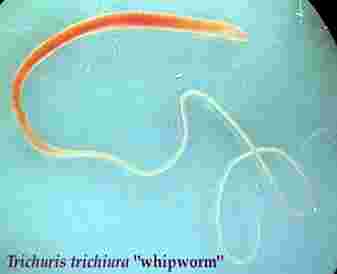 For more information about water, click here. Read this page with your kids. You and they will enjoy.

Whilst cleaning up our water supply has been one of the greatest public health achievements of the Twentieth Century, a fascinating new study (this is no April Fool's joke!) is that our too pure drinking water is possibly the cause of auto-immune diseases.

And doctors are now treating patients by deliberating putting parasitic worms in the drinking water of patients suffering.

Instead, we choose to drink rainwater from our roof rather than the chlorine and asbestos laden stuff that comes down our ancient concrete asbestos pipes from the utility. It certainly has some bugs in it, though no E. Coli. After five years we have had absolutely no adverse effects.

Is your baby suffering from Infantile Colic? Do you know what the Rule of Three is? Read more … COLIC CHIROPRACTIC.

More water and less fruit juices may be part of the solution; they have a very high glycemic index and set your child firmly on the route to obesity and diabetes.

One of the most deadly, incurable diseases is a cancer called mesothelioma; it caused by exposure to asbestos fibres. If breathed in, it causes lung cancer. If swallowed, bowel cancer; choose the water you drink carefully.

Many of the old pipes carrying water to our homes are made of a asbestos concrete mix. Recently one cracked outside our home where we have retired in South Africa. Looking down the lumen of the pipe, all one could see was a shroud of asbestos through which our drinking water filtered.

It's for this reason that we have put in a reservoir to collect rainwater, and to preserve the planet. Drinking water that has passed through these pipes is simply madness. This week I'll be visiting a friend with large bowel cancer. I wonder if it's mesothelioma, or caused by chronic constipation? 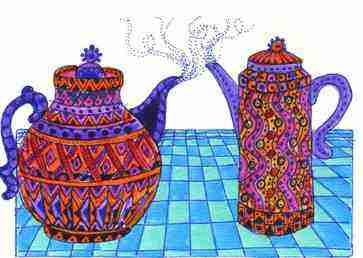 In this lovely painting by Lorraine Harrison it would seem that the teapot and the coffeepot are in fellowship, in agreement: Drink more water not and cola filled with either sugar or chemicals. Aside: I'm not strongly convinced of this, but I THINK that instant coffee, like instant-everything-else, is probably not good. They use xylene to extract the caffeine, and traces remain. It's toxic stuff. And teabag-tea tastes so S-H-one-T that I stick to loose tea, despite having to dispose of the tealeaves.

My rule: Treat ANYTHING that is processed by the food industry with a tad of suspicion. Mostly they seem to screw it up.

So, drink more water, but don't get neurotic about the eight glasses per day. And consider other delicious ways to get it down.

A little chopped piquant fruit (mandarin, lemon, plum ...) in a pot of very weak tea is delicious. Kept hot, or cold, in a thermos makes it available for hours. Best strain off the leaves after ten minutes though, otherwise it gets bitter.

In summer, squeeze half a lemon (or less) and a teaspoon of honey into a couple of litres of water. Keep in the refrigerator, and enjoy it all day. Drinking water need not be drudgery. Keep a glass of drinking water on your desk all day. That's what I do.

Healthy living tips points out that one of the best sources of water is actually the fruit and salads we enjoy. They are 90% pure drinking water.

Peruse our healthy living tips page periodically when you have some time; if you have time. We make time for the things that are important to us. And care for our bodies is surely more important that some sitcom, not so? It's all about the choices we make; if we do this, then we can't do that, so take your pick.

Latent heat of fusion has been a fascination of mine since high school days. Without it life on earth would be virtually impossible. The first ray of sunshine on the Alps, Rockies and Himalayas, and our Drakensberg, would turn the ice and snow into a flood. 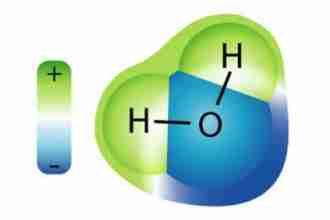 It's the magical polar nature of water that enables us to make an MRI scan like this: 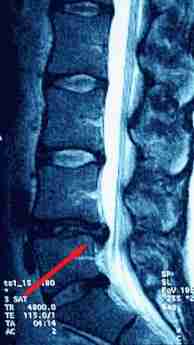 People come to Jesus Christ for all sorts of bizarre reasons. It was the polar nature of water, and in particular the Latent Heat Fusion that finally convinced me in the existence of a Creator. To believe otherwise was just far too far-fetched, too improbable.

A slipped disc like the one above at L4-L5 generally causes pain and tingling down the side of the leg and towards the web between the great toe and the second toe. If severely pinched you won't be able to lift the big toe. Bread and butter for the Chiropractor but each case is a challenge and when severe these slipped disc rules have to be followed to a T or it won't heal. And you know what that means: surgery. 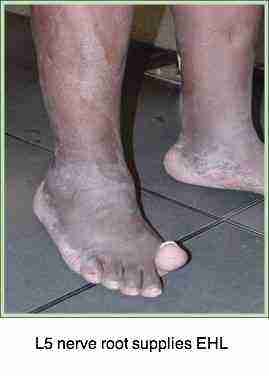