Sudden onset of hip and thigh pain can be very disconcerting. You go to bed at night with nary a problem and wake up in the morning barely able to walk.

Placing weight on the leg is excruciating and you're looking for a stick or crutch to enable you to walk. What to do is of course always the question? One factor may be whether you have medical insurance or not.

As a rule of thumb I don't recommend rushing off to the doctor or chiropractor for a snivel or little ache; but this is something else. You're actually quite disabled. If you've had several previous episodes as in the case below, you can be less concerned.

More than likely something happened the previous day. Perhaps you went to the gym or stumbled on the stairs, but thought nothing of it.

Have you had upper leg and groin discomfort before is a question your chiropractor will likely ask; and does granny walk with a limp and a stick? Is your hip sometimes stiff in the morning? Do you ever have difficulty putting on a shoe.

Of course, if you are a senior then arthritis is a possibility but sudden onset like I've been describing is not a feature.

Radiation via the femoral nerve from the mid lumbar spine, through the groin and to the side and front of the thigh is certainly one factor that needs to be considered in the differential diagnosis. Almost invariably there would be distinct lower back pain; and bending movements of the spine provoke the hip and thigh pain.

The sacroiliac joint too can often provoke hip, groin and thigh pain; only a careful examination can distinguish between these various syndromes.

It's interesting that at a conference of the fifteen top spinal medical specialists in the world, they concluded that less than fifty percent of the time were they in agreement over the diagnosis of lower back and leg pain; and so it is. In the chiropractic world there is often a fair amount of umming and ahhing when faced with hip and thigh pain.

We now present such a case when both the sacroiliac joint and a pincer deformity in the hip are both seen to be the villains of the peace.

A 47 year old woman had a five year history of intermittent right lateral hip pain that radiated to her thigh and knee; there was no significant low back pain, nor was there a family history of hip arthritis. She was taking 15 dual anti inflammatory drugs per week, at least one week in the month; for hip pain, but also for headaches.

On examination, there was reduced flexion and adduction of the hip with pain in the groin and lateral hip. Internal and external rotation of the hip were relatively normal, but with slight hip pain. Fabere tests was negative.

There were no xrays, but the presentation was consistent with a mild case of a hip impingement syndrome.

Fortunately both her headaches, coming from her jaw joint not her neck interestingly, and the hip responded very quickly to chiropractic treatment. 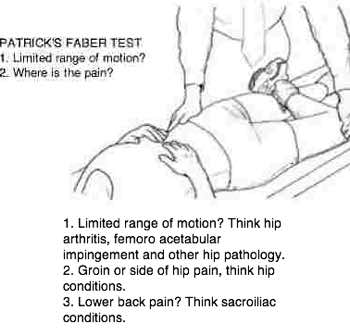 Hip and thigh pain has many possible causes; femoro acetabular impingement syndrome is only one of them. 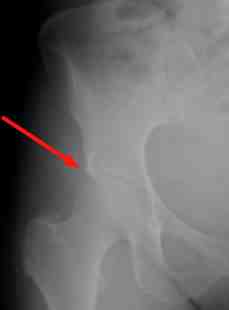 A pincer deformity is a not uncommon cause of stiffness and ultimately hip and thigh pain; the x-ray above reveals a very small deformity, but enough to be disturbing.

Recently after a particularly vigorous aquacise class she again developed very severe hip and thigh pain. This time she was barely able to walk; the sharp stabs started the morning after the workout in the pool.

The presentation again was not dissimilar to the original, only far more severe, and with strongly positive sacroiliac joint tests to boot.

Xrays which I now deemed to be necessary show a very small pincer deformity, entirely consistent with the presentation of very limited and flexion and adduction of the hip. It's not a very good quality film.

Again the hip responded extremely well to mobilisation of the hip, chiropractic adjustments of the SIJ and deep soft tissue therapy in and around the hip. Such that after three days she was adamant that she was returning to the aquacise class, very much against my advice, I might say. Happily she was not worse after a gentle workout in the pool; in fact, if anything a little better.

Now five days later she was determined to go for a ten kilometre run; an exercise junkie.

It's an interesting question; is your doctor always right when she or he strongly disapproves of something you plan to do? No, not always, but usually. You should have good reasons to ignore their pleas for a little sanity.

In this case the doctor was right! After four kilometres she again has severe hip pain and still had to finish by hobbling another six kilometres. It's back to square one.

Degenerative joint disease, often called osteoarthritis, certainly is one of the main causes of hip and thigh pain; but the onset is steadily increasing stiffness and a deep ache, often in the groin. Eventually putting on shoes and cutting toenails becomes difficulty.

Osteoarthritis in the hip is frequently one of the sequelae of two conditions:

Both these conditions need daily exercise long before they become arthritic; just like you would brush your teeth to prevent cavities. Neglected both dysplasia and FAIS become arthritic much earlier in life.