Symptoms of whiplash covers some aspects of the chiropractic management of this potentially serious injury.

This page was last updated by Dr Barrie Lewis on 28th September, 2020.

A great multitude of signs and unusual sensations may occur after a motor vehicle or diving accident, for example. Every trauma is unique and there is no typical patient. The common MVA crash can damage the body, literally from the toes to the skull, and everything in between.

After thirty-nine years in practice I am convinced of one thing; there are very few whiplash injuries that leave people completely unscathed.

The human skull weighs typically just a little less than five kilograms. Set upon very small and fairly fragile cervical bones, supported by soft tissue structures designed to make the head highly mobile, the cranium, when set abruptly in motion, places very great forces on the neck and upper back, not to mention the brain.

Fracture is not uncommon, strain of muscles and sprain of ligaments is usual, and the shock to the neurological and psychological system is enormous. Every MVA is after all a brush with death. Psychological sequelae are ever present, and to make it more complex, research indicates that the presence of litigation often appears to delay healing.

Whiplash Chiropractic is a vital subject in the management of cervical trauma to prevent devastating UncoVertebral Joint Luschka arthritis and the ensuing arm pain. Read more at these arm pain case histories, for example.

Until recently, it was mystery how people emerged from an accident with almost no symptoms or signs, yet within 10 years their necks have become an arthritis mess. Now we know why: Immobilisation arthritis. Fixation of the joints causes them to degenerate, mysteriously often with little pain or discomfort. It is indeed mystery.

Symptoms of whiplash describes the mechanics and symptoms after trauma.

Did you notice how the brain moves backwards and forwards within the skull in this picture? Many of the bizarre symptoms of whiplash, like dizziness, blurry vision, hearing loss, and tinnitis (ringing in the ears) may be due to brain injury rather than neck injury as such.

What is important is to recognise the wholeness of the human being. The brain and spinal cord make up one system. Whether whiplash is a traumatic brain injury, or a spinal cord myelomalacia as it's called, or cervical joints and soft tissue sprain, the symptoms of whiplash are complex. And often are very serious.

There is a school of thought promulgated by a prominent orthopedist in the Netherlands that whiplash is no different to a sprained ankle. A prominent (and I believe highly irresponsible) newspaper article caused great stress to many victims of whiplash. Either whiplash kills you, or causes little more than sprain of ligaments and strain of muscles. There is no continuum. Oddly they even deny that a collar may be of value in whiplash, but are happy to recommend a cast or supporting bandage for a sprained ankle.

"If the only tool you have is a hammer,

you tend to see every problem as a nail."

Seemingly, having forgotten that the skull and cervical spine contain the most sensitive structures in the body, the central nervous system, they have plunged many victims of whiplash into despair. Are all these symptoms dreamed up? Are you going crazy? Certainly not.

As such they have certainly contributed to the Post Traumatic Stress Disorder often associated with whiplash.

This I can personally attest to. Some years ago a sports car passed us at very high speed. Fifteen minutes later we came upon the scene of the inevitable. Five dead bodies were lying on or close to the road. The sports car was lying in three completely separate parts. Just having witnessed the scene, to this day my wife may unexpectedly become extremely agitated when travelling.

We weren't physically injured, yet the psychological impact was profound as we mentally revisit the scene.

Chiropractic fortunately has many of the right tools at hand for the symptoms of whiplash. We can immobilise (with a collar), stretch, massage, cross-friction, adjust the spine using both forcible and gentle techniques, use ice for the swelling, and counsel.

What is problematic for doctors who see whiplash in only one mindset, having only one implement in their toolbox, is that that tool may indeed become a hammer in his hand.

This is just as true of a medical man who has only drugs at hand, as the chiropractor who only adjusts the spine forcibly. Neither may be the treatment of choice for an acute whiplash, and may aggravate the symptoms of whiplash.

Every doctor can and should use his own discretion, but for myself I would choose to rule out fracture and serious ligamentous injury more often than not.

Whiplash of course doesn't not only occur after MVAs. A fall from a horse, a trampoline ... it's common. Few escape without some form of injury that may leave lasting symptoms of whiplash.

The so-called Joints of Luschka are, because of their proximity to the foramen from which the nerve exits on its way to the various parts of the body, particular susceptible to whiplash and likely to cause nerve-type symtoms in the future. Read more at our newsletter Whiplash and the Joints of Luschka … 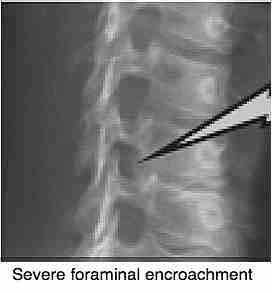 What are the symptoms of whiplash? They are divergent and complex. There are no two that are exactly the same. The position of your head in the accident, the angle at which you were struck, or collided with another impediment and then another, whether you anticipated the accident and tensed your muscles, these variables all make each injury unique.

It can affect your low back, your ribcage and, the seatbelt may save your life, but contuse the breastbone and ribs; airbags can in themselves cause injury.

You are not going crazy. But recognise that, if you are hoping for a big monetary claim, it's likely to delay healing, perhaps seriously so. Get on with life, accept that what has happened, cannot be changed; it's set in concrete and bemoaning the fact will do you not one iota of good.

A lecture series given by paramedic, turned nurse, turned chiropractor, Dr Larry Nordhoff gave me a whole new perspective on whiplash. With 13 years working in the ambulance, the emergency room, in ICU and 25 years as a chiropractor under his belt, books like his Motor Vehicle Collision Injuries are a must for every chiropractor, and even for those suffering from the symptoms of whiplash who may want to understand more.

There are other excellent texts by chiropractors.

How bad is your neck pain? Scroll down for a classification that will enable you to rate the seriousness of your injury.

Because road accidents and whiplash have such huge economic and social consequences, there has been much research done in the field, including in Chiropractic.

Some pain medication may well be needed after whiplash, and we Chiropractors are not in general against the limited and wise use of medicine.

Certainly cortisone and NSAIDS have been proven to reduce healing of the soft tissues and should only be used with discretion and a short period, and never more than one.

Cervical artery dissection is one of the most serious sequelae or symptoms of whiplash.

Should you have change of taste, ringing in the ears, dizziness, a drooping eyelid or other unusual neurological symptoms after a whiplash, be sure to tell your chiropractor. Even months and months after the accident. Whiplash Cervical Artery dissection ...

Cervical ribs are not that uncommon, though the really large ones as seen below are only rarely seen in private practice. 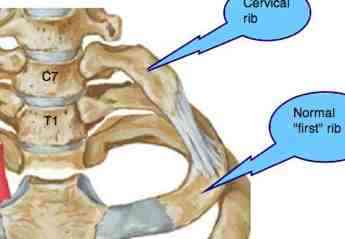 Ribs belong properly to the Thoracic Spine, but occasionally there might be a rib in the neck, a Cervical Rib. Two persons per thousand. Mostly they are small and of minimal clinical significance - until something upsets the applecart. Like a whiplash injury.

Reduced movement at C7-T1 means even greater stress at the C5-C6 and C6-C7 joints creating more symptoms of whiplash at these levels, with a greater likelihood of shoulder and carpal tunnel syndromes.

It's sobering that South Africa has the most dangerous roads in the world with 20,000 deaths and 150,000 seriously injured persons in 2014. As of writing in 2019, the whiplash statistics continue to soar.

And the United States lies not far behind at fourth.

Spinal cord injuries are probably, after head injuries, the most serious of these traumatic injuries; fractured or dislocated vertebrae or seriously injured discs damage the spinal cord.

If these are not treated immediately permanent paralysis occurs; the rule of thumb is get them to a skilled trauma unit within the golden hour; that's sixty minutes.