Cervical rib case file shows the rudimentary structures are usually of little clinical significance but occasionally they are enormous causing disturbing tingling in the arm and hand.

Note well which fingers are affected as that is of great help to the diagnostician. 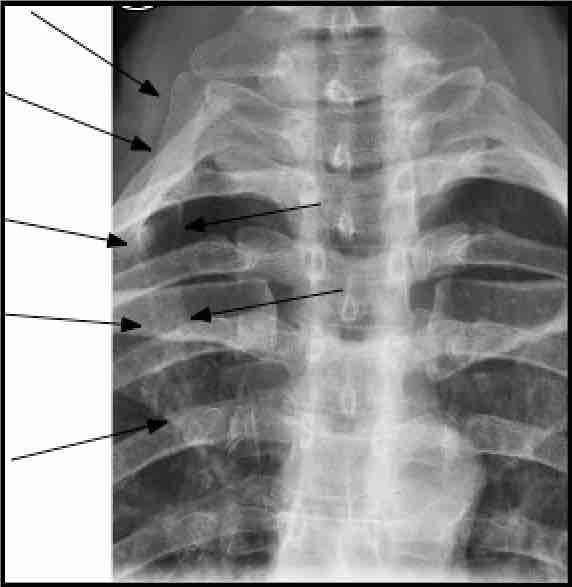 Brief Review of the anatomy

The inter-scalene triangle is a small passage in the lower neck through which pass the artery and nerves to the arm.

In two persons per thousand an extra structure may be located in that passage; a cervical rib.

In most instances cervical ribs are small structures of little clinical significance. However, very occasionally, they may be enormous influencing either the subclavian artery or the brachial plexus of nerves, or both.

Hence the symptoms can be very variable; vascular and neurological, depending which trunk of the brachial plexus is affected. It could influence the thumb, the little finger, or all the digits.

Claudication is a condition where there is sufficient blood for the muscles at rest, but as soon as there is increased activity, the oxygen supplied is inadequate; a deep ache develops.

Angina is a similar condition of the heart, as is vascular intermittent claudication in the leg causing pain when walking or cycling, but not at rest.

In short a cervical rib case file may produce a crazy mixture of vascular and neurogenic signs and symptoms.

Complicating the story further there may also have been previous trauma as in a whiplash causing injury to the lower cervical spine; is the pain and tingling in the arm really from that misplaced rib, or is that an incidental finding? That is, something that is true, but not relevant to the patient's symptoms.

Adding further grist to the mill is that conditions in the apex of the lung may also affect these structures. A careful and very thorough workup is called for.

Very occasionally the venous return from the arm may also pass through the interscalene triangle in which there may be swelling and even a clot in the upper limb. 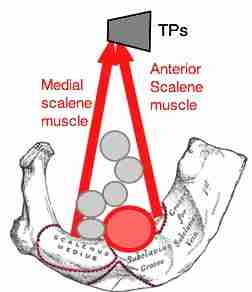 Originating from the C7 transverse process and passing through the interscalene triangle, this extra rib can severely interfere with the normal function of the arm.

What is mysterious is that the cervical ribs are usually quiescent for many years until some event like a car accident or bad fall starts the radiating pain and tingling in the arm and hand.

The symptoms are very variable, depending on whether the artery primarily is affected, and which trunk of the brachial plexus. Generally, the nerves are influenced more than the blood vessels.

Classically, raising the arms further narrows the passage causing what is known as a thoracic outlet syndrome.

The diagnosis for TOS usually is determined by Adson's test. The effect on the radial pulse is assessed with movements of the head, neck and arm, together with breathing. It is however a very subjective procedure, and dependent on a strong heart and sufficient blood pressure.

If the radial pulse is weak and thready then it is difficult to make a proper assessment.

In carpal tunnel syndrome the median nerve is affected causing tingling in the thumb side of the hand; in a cervical rib case file the pinkie is more likely to be symptomatic.

Cervical rib case files often cause other syndromes in the upper limb such as shoulder pain or carpal tunnel provoking tingling in the arms and hands.

Tingling in arms and hands is invariably a large component of these cervical rib case files; a differential diagnosis is important. Is this a true carpal tunnel syndrome, for example, or just a byproduct of that large offending appendage in the upper torso? 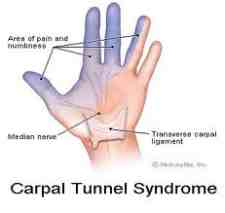 Arm pain and tingling in the hand are frequently featured in cervical rib case files.

This patient has had neck pain periodically all her life since a serious fall aged 17. Three years previously surgery for her spine was recommended, but she declined. There was no mention of a cervical rib. The pain gradually resolved of itself.

Eighteen months prior to the first consultation she had a severe episode of right shoulder pain after yoga which resolved 90% after physiotherapy.

She has a tired feeling in her left upper arm.

The ache in the right lower arm, and the tingling in the fingers began some 6 months previously, but was getting worse despite treatment by two different physiotherapists.

Mrs T is a healthy looking, slightly built, non-smoker. Of concern, she was on HRT "in case of osteoporosis", despite the risks of stroke, heart disease and clots, breast tumours and incontinence.

Scroll down for more information from the Women's Health Initiative at growing green beans; legumes are part of the solution.

Range of motion of her neck was normal and pain free without referral to either arm. Kemp's test for a facet syndrome was negative, as was the cervical compression test for a suspected disc injury; Phalen's and the Reversed procedures for Carpal Tunnel were negative.

Ranges of motion of the shoulders were normal.

The Upper Limb Tension test for a tethered nerve root was negative, and all neurological tests were negative. 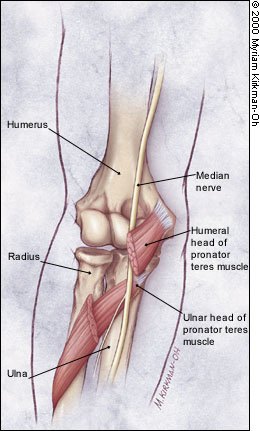 There was no pain in the Pronator teres muscles in the forearm, almost always painful in Carpal tunnel syndrome.

On the right, for the first time in my whole clinical life, I could detect absolutely no radial pulse; zilch. So it was impossible to do Adson's test which is dependent on a normal radial pulse. 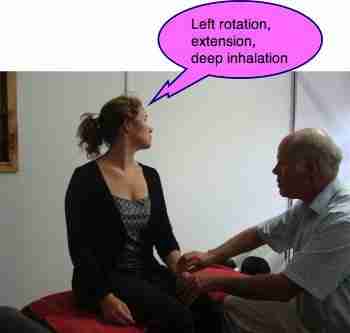 I traced Mrs T's history carefully, looking for anything that I may have missed, asking about other things she may have remembered, and reported to her the mysterious lack of expected findings at the first examination, with the exception of the inexplicable absence of a radial pulse in her right wrist.

I then opened the X-ray folder. 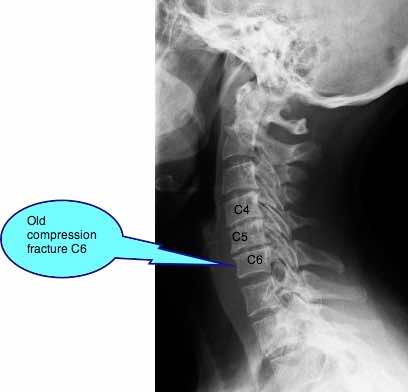 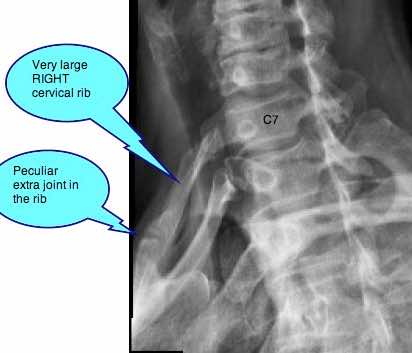 At the second consultation I always tell the patient what they can expect:

Strong recommendation that she get a telephonic headset. 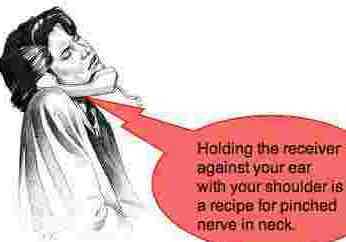 The first treatment of her scalene muscles and an adjustment of the LEFT first rib. I decided to start on the less symptomatic side first.

Not much change. Today we adjusted the RIGHT first rib, avoiding the supernumerary cervical rib. Extensive work on the scalenes, the left shoulder, the right forearm and wrist.

Definite improvement in the tingling and ache in the lower arms. I "thought" I could detect a slight radial pulse after the treatment. Was I hallucinating?

The power of chiropractic never ceases to amaze me. Mrs T declared today that she woke for the first time in six months without tingling in either hand. Perhaps more important, before the treatment today, she had a distinctly palpable pulse in the right wrist.

The improvement continues. Sometimes there is tingling in the arms in the morning, for fifteen minutes, but the pain in her right arm has improved by at least 80%.

At my suggestion, she has purchased a multiamedia headset as described at pinched nerve in neck so that she does not have to raise her right arm for long periods. That too seems to be helping.

At the next consultation we will begin with the rehab of her arm. It is going to be trial and error: With such a large space-occupying rib in the Inter Scalene Triangle I simply cannot be sure that exercises prescribed for most folk with neck pain will work for her.

Mrs T is improving far beyond our expectations. After a two month lay off in the summer without treatment, which was not recommended, she has again that deep ache in her arm within a week after starting school. Pressure, telephone, stress, traveling in the car, and computers are doing her in; absolutely zero radial pulse once more.

One of the concerns is a thrombosis as the subclavian artery and vein must be considered in the thoracic outlet. Fortunately she's not overweight, knows all about the foods that lower cholesterol without having to be told, and has never smoked. A clot is very serious, causing the arm to swell. However, there are concerns about that HRT which does increase her risk of cardiovascular complications.

This week I had an email about another cervical rib casefile; a patient who went the surgical route for this problem. The surgery was quite successful in one arm, but the other has been a disaster. Severe weakness and numbness in the hand; they must have nicked the brachial plexus of nerves.

Update: As expected Mrs T varies between 50-80% better. There are disappointing times, some very good times. The complicating factor of course is that she really has two different condition:

She is adamant she will not go for surgery to remove the rib. The right decision in my book. Some would say that is because I have a vested interest. True. But when you read the letters I receive at C-H asking for advice after a cervical rib excision that has gone horribly wrong, you will understand my viewpoint.

A cervical rib case file may hopelessly confuse the symptoms of whiplash.