Cartilage degeneration sets in when joints are deprived of movement, for whatever reason.

My first conscious experience of it was some twenty five years ago when I was consulted my a young man with low back pain caused by a very odd gait; he was unable to bend his right knee.

Five years previously he was shot in the upper thigh with a high calibre rifle. The femur shattered, his whole leg, foot to hip, was immobilised in a plaster cast for over a year. At the end of the period, the fracture healed but he was unable to bend his knee even slightly, and never regained the movement. Starved of nutrition from the normal effect of joint fluids swilling about in the knee, the cartilage rapidly, and irreversibly, degenerated.

That in effect is what happens in the spine when much smaller facet and disc joints become fixated. The hyaline cartilage that lines the ends of bones is utterly dependent on the synovial fluid within the joint for its requirements. Should the nutrients and oxygen not be replenished, and waste products removed, immobilisation arthritis sets in.

A degenerative facet joint as seen on CT scan. 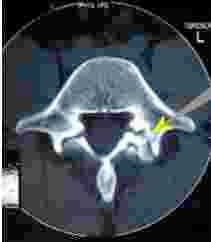 Mrs S, 42 years old, consulted me three weeks ago (June 2009) complaining of severe arm pain and tingling in the thumb and forefingers of both hands. Worse, burning pain on the soles of both feet and, in the mandibular distribution (left) of Cranial Nerve V, numbness and tingling.

The condition started insidiously in 2004. There was no known cause, and no trauma is recalled. There was (and is) no pain in the neck. She did complain of stiffness in the neck, however. 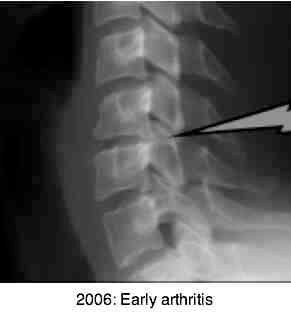 A tentative diagnosis of MS was made in 2006 by a neurologist. Parkinsons medication eased the pain sufficiently for her to sleep at night, but had abhorrent side effects. Nothing else helped. 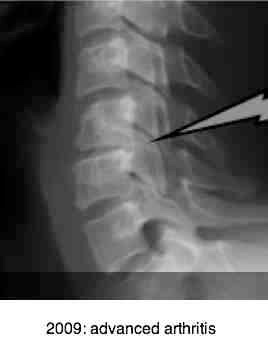 For the purposes of this page on immobilisation arthritis, orthopaedic and neurologic details will be omitted.

Notice the relatively minor degenerative changes in the first and third x-rays taken in 2006. The radiological report states that there is slight loss of C5 C6 disc space. The spinal canal has sufficient depth, and the foramina are all normal.

Notice the severe changes that have occurred in only three and a half years. I have only shown the right oblique, but the left is almost identical. 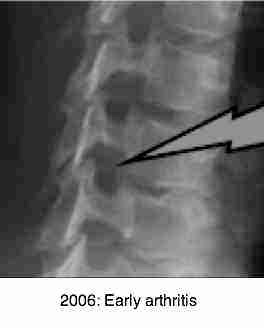 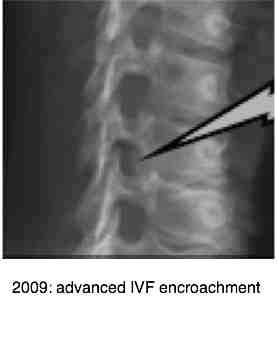 Notice the advanced degenerative changes in the unco-verebtral joints bilaterally. The astonishingly swift Immobilisation Arthritis gives testimony to the importance of normal joint nutrition and movement.

The ins and outs of this case have not yet been satisfactorily settled. The MRI does not give clear cut signs of cord impression causing long tract signs in her feet. The absence of obvious TMJ symptoms leaves the numbness in the face unexplained. Hyperparathyroidism should be considered. She does also have an upper cervical fixation, perhaps effecting the sensory nucleus of cranial nerve V in the upper neck. The association of TMJ and upper cervical subluxations is of course legendary. 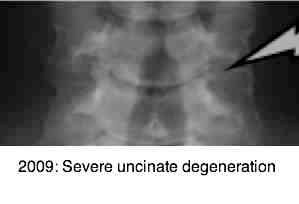 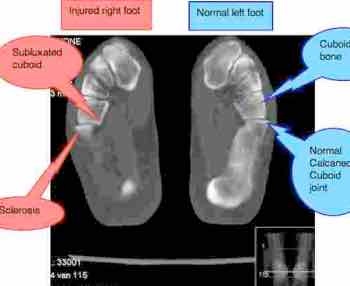 A subluxation from the Chiropractic viewpoint, is a HYPO-mobile joint with DECREASED movement, but no instability due to ligamentous damage.

It is this loss of movement that causes Immobilisation Arthritis.

A subluxation on the other hand, from a Medical viewpoint, is a HYPER-mobile joint as would occur in trauma, or interestingly in conditions such as Rheumatoid Arthritis. Ligamentous laxity allows for INCREASED movement.

Is it any wonder that confusion reigns? In the Chiropractic model, mobilisation and manipulation (or an adjustment, as I still call it) is the treatment of choice. In the Medical model, it's strictly contraindicated.

Mechanoreceptors in ligaments, muscles, capsules and the skin (and other) record movement in the joint, amongst other things, giving the CNS vital information about position sense, and contributing to posture and balance.

Interestingly, in the dorsal horn of the spinal cord they have an INHIBITORY effect on information relayed from Nociceptors.

Nociceptors do not carry pain sensation, but they inform the CNS about noxious stimuli and other potentially harmful information from the body.

In particular, chemosensitive nociceptors carry information about noxious stimuli to a nerve root, for example, that is being bathed in the toxic byproducts of joint cartilage nutritiion. Normally such wastes would be dispersed, but in hypo-mobile joints, such wastes accumulate causing a noxious effect on the capsule, hyaline cartilage and adjacent nerves.

Cell degeneration has been demonstrated within thirteen hours (in white mice) of artificial joint fixation. These degredation products set up an inflammatory cycle further adding to the dorsal horn bombardment by nociceptors.

Hypomobile joints cause INCREASED noxious stimuli entering the dorsal horn, and DECREASED inhibition of this nociceptor activity by mechanoreceptors in the dorsal horn.

Initially, this is a silent process. There is no pain, that comes later.

Worse, this increased nociceptor activity has been shown to have a cascading effect on the autonomic system, and general health.

Proteoglycans are chemicals found in the spaces between collagen fibres. They have special water-binding properties giving collagen its elastic properties. They also link individual collagen fibres to one another.

Okazaki and his fellow researchers confirming the existence of Immobilisation Arthritis found that:

Notice here that, once they hyaline cartilage covering of the bone has been breached - in this case by the butcher's saw; fluids in the joint have immediate access to the underlying bone. That is what sets up inflammation, and the cysts that form within arthritic bone.

Articular cartilage of immobilized knee joints of rabbits were shown by Okazaki et al was found to have severe degeneration 42 days after mobilization.

The nucleus pulposis has a very high metabolic rate, but no blood supply. It lives only 'because of movement' (Mooney, Spine 1987), movement being the nutritional pump that drives nutrients, oxygen and waste products in and out of the disc. Without movement the water-binding property of the proteogycans in the nucleus is lost as the cells, starved of nutrients, begin to degenerate as Immobilisation Arthritis sets in.

Worse, waste products and intracellular fluids released as the cells degenerate are trapped within the fixated disc, setting up an inflammatory reaction, and a "chemical radiculitis".

It is the water bound by the proteoglycans in the nucleus that pressurises the disc, keeping the vertebral bodies apart. When it is lost, the disc (as seen in MRI) is lost and it loses its bright white colour. Eventually it is bone on bone.

Notice the normal white disc at L3-L4, and the dark degenerating disc at L4-L5, with the inevitable posterior bulge, also arrowed. 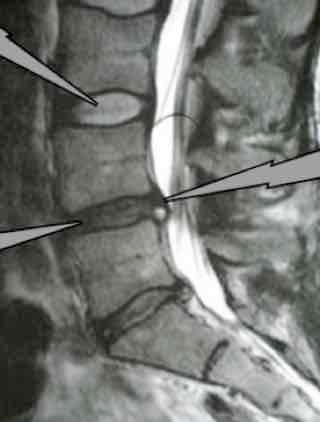 What makes things difficult for chiropractors, and I presume surgeons, is that very often there is more that one disc complaining. In this case, we can see that the lowermost disc at L5-S1 is also bulging. Diagnosing which disc is currently causing symptoms is part of the art of chiropractic. 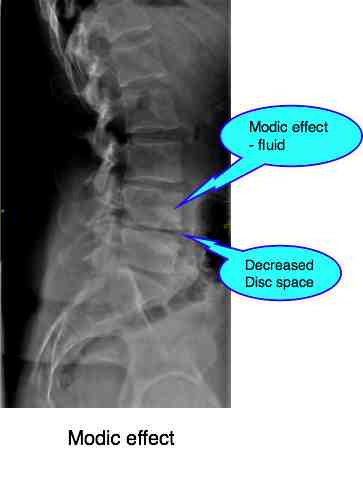 Patients with degenerating discs sometimes get swelling within the vertebral body itself, seen on MRI. On T2 image an increased intensity of the signal is seen.

Researchers have shown that as the disc degenerates increases the forces on the vertebral endplates, resulting in microfractures and fissures into the subchondral bone. Fluid leaking into the bone causes the hyperintense signal seen above.

Clinically these patients have a deeper, more constant pain, night pain, and pain that ma not respond well to a heavy exercise programme.

It is often assumed that degenerative change is untreatable; the damage is done. Nothing could be further from the truth; chiropractic for arthritis is what we specialise in every single day.

The facet joints too only live 'because of movement', to use Mooney's pregnant phrase. The facet cartilage likewise degenerates should it be starved of nutrients and poisoned by toxic wastes caused by spinal fixations. Immobilisation Arthritis. 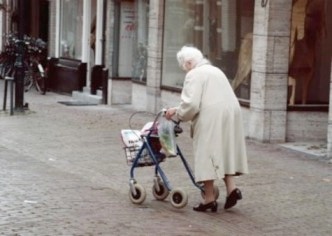 Arthritis, smoking and obesity are all first cousins. Kissing cousins, that close. The reasons are complex, firstly because of chemical changes in the body as the large fat deposits start to act as glands producing noxious chemicals, but also simply because the increased weight on the joints. Smoking starves joints of their required oxygen. Result: degeneration joint disease.

See someone using a walker. Nine out of ten are obese because of the arthritis in hips, knees or feet. 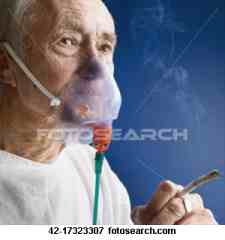 As every chiropractor knows, patients who manipulate their own spines apparently get temporary relief but the symptoms and signs soon worsen, often with the onset of a radiculopathy.

Is this a contradiction? If mobilisation and adjustment of fixated joints reduces the toxic effect of joint hypomobility on articular cartilage, why should self-manipulation have the opposite effect?

My theory is that self-manipulation:

That is my theory anyway. Our critics, and some patients, accuse us of discouraging self-manipulation so we chiropractors can make more money out of patients. However, in my experience, self-manipulators inevitably end up with dreadful joint pathology. Furthermore, if they continue to crack their own joints, our care no longer seems to help them.