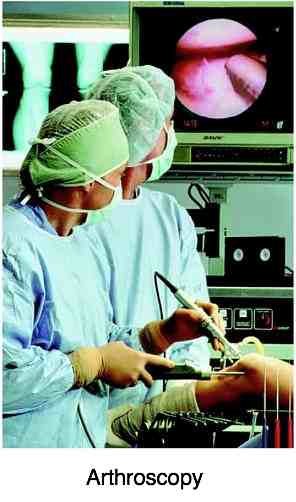 Arthroscopy knee surgery is the most common procedure for pain and osteoarthritis yet medicine's own research casts considerable doubt on the operation.

It is used for damaged ligaments and menisci, and osteoarthritis.

Our philosophy, and common sense too, recommends conservative care before such drastic measures are used.

A group of nearly two hundred patients with stubborn pain that would not respond to six months of medical treatment, were operated on by one highly experienced orthopaedic doctor; the US National Basketball Association surgeon.

Patients were divided into three groups; they were blinded, not knowing which procedure they would receive.

All three groups were treated with the exact same post operative care, and then followed for a two year period.

Real versus a sham procedure.

The placebo group did better or, as well as, the lavage and debridement groups, both in terms of improved function and pain relief.

Or, to put it differently, at several times during the two year follow up period, the group operated with debridement did significantly worse than the placebo group.

Reference: Arthroscopic Surgery for Osteoarthritis of the knee, NEJM 374.

Lateral knee pain can be referred from the lower back, but more likely it's a friction rub syndrome of the ITB; a fairly frequent cause of non traumatic disability. It's not a surgical case. But first rule out torn ligaments or a damaged meniscus.

Noble's test would be positive and there would likely be tender trigger points down the ITB and in the TFL muscle belly. The straight leg raise of Lasegue would be negative.


At this stage surgery is certainly not appropriate.

Perhaps you have read this. "A surgeon has admitted to performing a number of operations that don't yield results due to a widespread acceptance of the procedure and to avoid patient complaints and stop them complaining.

Ian Harris, a Sydney Orthopaedic surgeon, who works at a number of hospitals including the University of NSW, said he has performed surgeries on patients that don't work, reported the Sydney Morning Herald.

In a new book, Surgery, The Ultimate Placebo, Professor Harris has noted that the only benefits some surgeries provide is the 'placebo effect'."

Patello femoral pain syndrome is a common complaint in the practice. Usually it comes on after a fall onto the knee or after much stair or mountain climbing.

The cartilage on the under surface of the patella, as it is called, is prone to wear and tear. Calcium crystals collect causing a grinding sound; medicine's solution is arthroscopy knee surgery.

PFPS also occurs in children. On a regular basis chiropractors are consulted with young people with sometimes severe and disabling kneecap pain.

The diagnosis for PFPS is done by Clarke's Test. It must be done very gently, because when positive it is very painful, and may aggravate the condition. PFPS is very treatable with chiropractic help. Research shows that a magnesium deficiency is often the culprit; spinach is one of the richest sources of the mineral.

Surgery may be used but, in my opinion, only as a last resort; it's possible that it's only benefit is the placebo effect. Mind you we chiropractors use it too.

Clarke's test is performed on the straight leg. The knee cap is gently pressed onto the femur, and distracted towards the foot. The patient then very gently contacts the quadriceps muscle.

A full examination of the knee including Clarke's test is obviously called for before arthroscopy knee surgery.

Whilst no chiropractor could even contemplate that s/he could supplant the excellent orthopaedic surgeon, there is enough research to suggest that before going under the knife, a consultation with your chiropractor may be the sensible thing to do.

Hospital acquired infection alone during all surgery is not uncommon.

Chiropractic help for knee pain is a daily business in a busy practice.

Mr S, an 79 year old man consulted me yesterday after having had arthroscopy knee surgery after an unfortunate collision. His car hit a cow on the road in the dark, and his knee met the dashboard by accident. There was no immediate pain, but a week later it swelled up alarmingly.

A month later he went for arthroscopy knee surgery by one of the region's top orthopaedic surgeons, but to no avail. There was absolutely no improvement. He walks with a severe limp and a cane, having had no knee problems prior to the accident.

Yesterday, he had a severe show of black blood in the stool; a haemorrhage from the stomach of blood caused by the anti inflammatory drugs.

We'll see how he fares with Chiropractic care.

UPDATE: The initial response was excellent, about 60% less pain in two weeks. Then he went on holiday and I never saw him again until recently at a wedding. He's battling again.

I obviously never impressed on him the need for an occasional regular treatment. Otherwise, most severe and chronic conditions gradually relapse again. My fault! Plus he lives 130km away.

More stories from the CHIROPRACTIC COALFACE 2 ...