Hip dysplasia improperly managed leads unerringly to early arthritis of the joint. Anatomists talk about developmental HD as it begins even before we are born.

DDH begins with a hypermobile hip in the child and young adult and, untreated, then gradually becomes stiff and arthritic as the patient ages.

It is vital in the young person to make the differential diagnosis; is this hypermobilty, the first sign of hip dysplasia, or a quite normal joint with loose ligaments and capsule? X-rays and orthopaedic tests of Ortholani, Fabere, Galeazzi and Barlow are very useful in making the differentiation.

So, what is hip dysplasia? The hip socket, or acetabulum, like all bones must develop, both in utero, and after birth. A child lying in the transverse or breech position is about twenty times more likely to suffer from a congenital dislocatable, or subluxatable hip.

In these positions the head of the femur, the ball, does not lie deeply in the socket which is essential to develop a normal deep socket.

The result in the newborn child is that the cup is too shallow, and the ball tends to subluxate or dislocate giving a deep sounding 'thunk', not a 'click'. The hip in the child, teen and young adult is HYPERmobile. Too much movement. 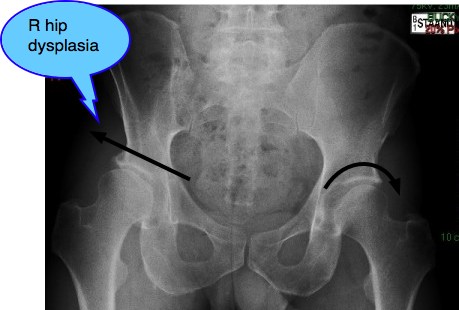 Developmental hip dysplasia must be differentially diagnosed from a normal but hypermobile joint.

In the adult, the ball of the hip is partially unroofed; it juts out of the socket, giving reduced femoral head acetabular contact. The full weight of the body is thus distributed over a much smaller area of the hip and the result is progressive degenerative arthritic change. Unless action is taken timeously, the hip gradually changes from HYPERmobile TO HYPOmobile.

Generally speaking patients are unaware there is a problem as it causes no pain in the early stages, and they are unaware that their hip is too mobile, or not enough . The hip dysplasia is unilateral. They may then be aware of a disconcerting clicking sound, and that they can dislocate their hip.

In the adult, the ball of the hip is partially unroofed; it juts out of the socket, giving reduced femoral head acetabular contact. The full weight of the body is thus distributed over a much smaller area and the result is progressive degenerative arthritic change.

Unless action is taken timeously, the hip gradually changes from HYPER TO HYPOmobile.

Generally speaking patients are unaware there is a problem as it causes no pain in the early stages, and they are unaware that their hip is TOO MOBILE, or NOT MOBILE enough, unless the hip dysplasia is unilateral.

They may then be aware of a disconcerting clicking sound, and that they can dislocate their hip. 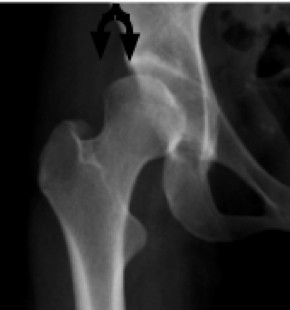 The paediatrician of course is specifically looking for Developmental Hip dysplasia, because treated immediately it is usually no big deal. The examiner will use some of these tests found at what is hip dysplasia.

However marginal cases sometimes slip through undetected until perhaps the concerned mother hears the disconcerting clunk, or sees aysmmetical skin folds around the hip, whilst she's changing the diaper.

Also, with increasing numbers of babies being treated by chiropractors for Infantile Colic, s/he too should be abreast of these tests.

The standard procedure is a Pavlik harness, developed by a Czech orthopaedic surgeon. This braces forces the head of the femur firmly into the socket by flexing and abducting the hips.

In African culture and certain other primates, the baby is carried on its mother's back in this very position, so it's no coincidence that DDH is uncommon in rural African communities.

Notice too how the infant must constantly use the adductor muscles of the hip to remain in situ, keeping the ball in the developing socket. 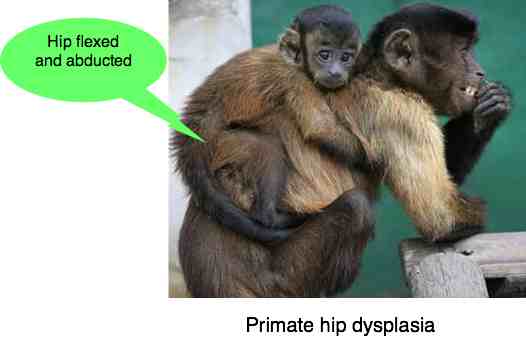 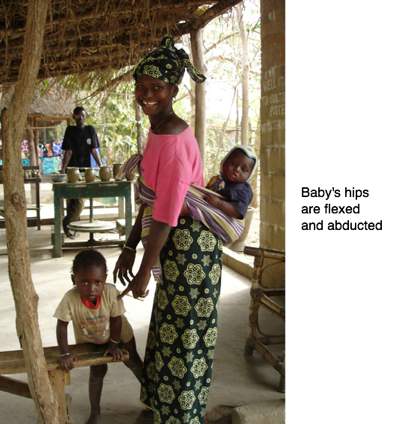 Sometimes too, an astute mother may notice that her child walks with distinct increase in the lumbar lordosis, and a waddling gait. These are primary signs of DDH, together with the abnormal folds of skin around the hip(s).

EXAMINATION OF THE TEENAGER AND YOUNG ADULT

The range of motion of the hip in the young person is normally highly mobile and unrestricted. Thus we do rush to make a diagnosis of probable DDH! However, in the case of the child or young adult who has a 'collapsing hip', a clicking hip, or pain in the groin and anterior thigh, there is a high suspicion of DDH as well as other hip conditions such as Perthes disease. Every case should be treated seriously, and followed until the condition has resolved. Left undiagnosed and untreated the likelihood of early disability and hip arthritis is high.

Interestingly, as in this Developmental Hip Dysplasia Casefile the presenting complaint in the chiropractic clinic may be upper lumbar pain, mediated through either the Psoas muscle or the Superior cluneal nerves, or the Femoral nerve. With a coexisting DDH it's difficult to decide: is this primarily a DDH or a Maignes Syndrome? In her case, I decided it was both. 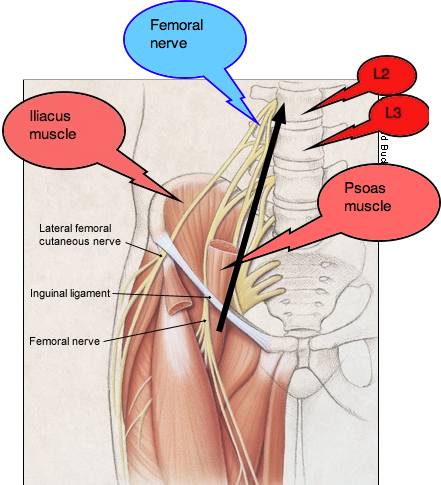 Mr P, a 52-year old man presented recently with right hip and groin pain, beginning about three years previously. Despite various medical treatments, it was clear that the condition was worsening. Putting on shoes and socks was becoming difficult. Walking was painful.

Interestingly, he knew the answer to one important question, mostly never known. He remembers his mother telling him that during her pregnancy that he lay in the Transverse position. Both the transverse position, and the breech presentation are known to be associated with a much higher incidence of Developmental Hip Dysplasia.

Conversely, in the normal vertex position the baby lies with the legs in the "taylor's posture, with the hips flexed and abducted, and the head of the femor sitting snuggly in the socket. 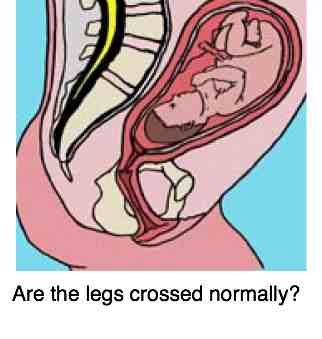 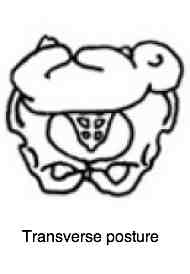 One hip is flexed and abducted, the other not. As a result the socket is not properly formed.

Note the well rounded acetabulum and absence of an "unroofed" femoral head. 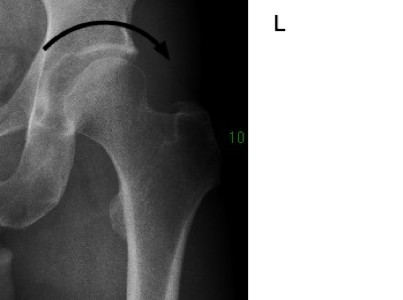 Note the sloping acetabulum, an unroofed one-third of the femoral head, the shallow socket and the beginnings of arthritis at the superior labral margin. Progressive hip arthritis. 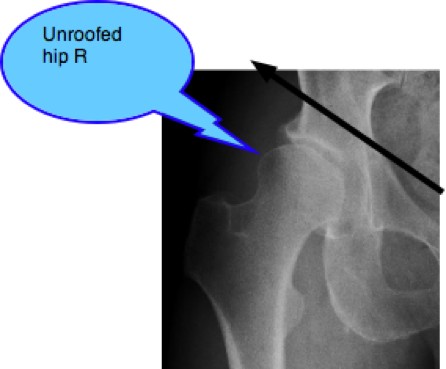 
Interestingly, there is also a suggestion of CAM deformity of the femoral head, contributing to the stiffness in the hip. FEMORO ACETABULAR IMPINGEMENT SYNDROME. Oddly, occasionally developmental hip dysplasia and FAIS can coexist in the same hip, producing confusing signs and symptoms.

Can Chiropractic help Mr P? I'm not promising him anything but having treated numerous similar cases I have indicated that I believe we have a large contribution to make. This is especially the case since he also has a sacroilac joint fixation, and suffers from low back pain. Privately, conservatively speaking, I believe that within 2-3 months he should have at least 50% less pain and discomfort overall in the low back, buttock and groin. The proof of the pudding...

Interestingly, research indicates that there is a higher incidence of hip (and knee) arthritis in patients with a short leg. A serious complicating factor for the patient with hip dysplasia.


Finding the right chiropractor for your condition is imperative. The DC who is expert in treating infantile colic may have little clue about developmental hip dysplasia. Like, would a paediatrician or an orthopaedic surgeon be your first choice if you decided to go the medical route? Do your homework first and find a good chiropractor with an interest and experience in the hip joint.

So, do your homework. Ask. If necessary go for a consultation without treatment so that you can assess whether this chiropractor knows about hips. Many chiropractors offer a free short consultation to help you decide whether you have a chiropractic condition or not. Simultaneously the shrewd patient can evaluate the chiropractor... was the examination thorough? Did s/he ask the right questions? Did he appear conscientious?

Hip dysplasia must be differentially diagnosed from a normal but hypermobile joint.