What is hip dysplasia?

Understanding what hip dysplasia is and the the tests used to diagnose it can prevent severe hip arthritis and referred pain to the back later in life. 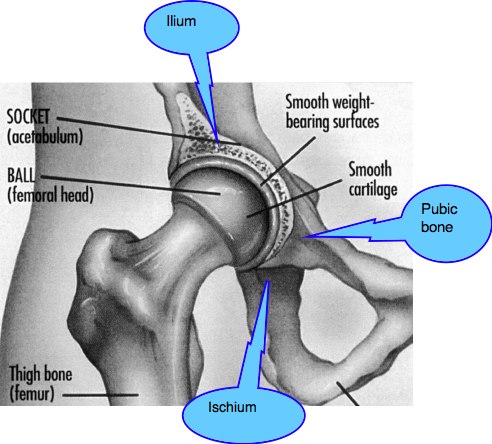 The normal development of the acetabulum in the young child is utterly dependent on the apposition of a normal round femoral head. Should the spherical hip dislocate, or subluxate, the three epiphyseal growth plates in the acetabulum will not grow normally.

The result? A shallow, misshapen socket from which the head of the femur will tend to dislocate or subluxate. Developmental Hip Dysplasia which untreated and improperly managed inevitably progresses to hip arthritis.

The three ossifications centres are totally dependent on the presence of the ball in the socket. No ball, then no healthy socket will develop, hence the term Developmental Hip Dysplasia. 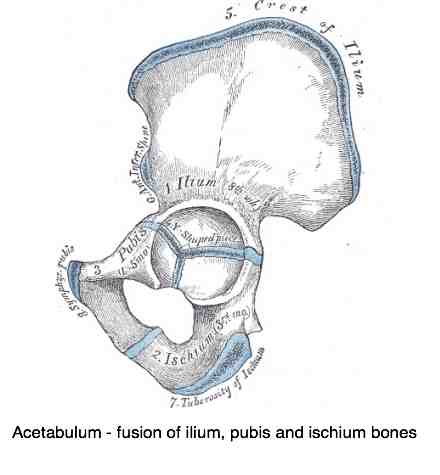 Place your thumb over the baby's (less than three months preferably) inner thigh with the index finger over the greater trochanter. Now gently ABduct the thigh and place medial-ward pressure over the greater trocanter into the acetabulum. An audible deep-sounding "thunk" as the ball repositions itself IN the socket is a positive Ortolani sign. A high pitched click is considered less significant.

Barlow's test is done with the baby's hip in ADduction, in which gentle posterior pressure is place on each hip, one at a time. In this situation the same deep-sounding "thunk" as the ball subluxates OUT of the socket is a positive Barlow's sign.

Hip dislocation results in a demonstratable short leg. Lay the infant on his/her back with hips and knees flexed. Is there a demonstrable difference in knee levels? Notable internal rotation or foot flare?

In the older child (three months +), dealing with a fixed dislocated hip, one is looking for a change in leg length associated with Hip Dysplasia Ortolani Galeazzi. 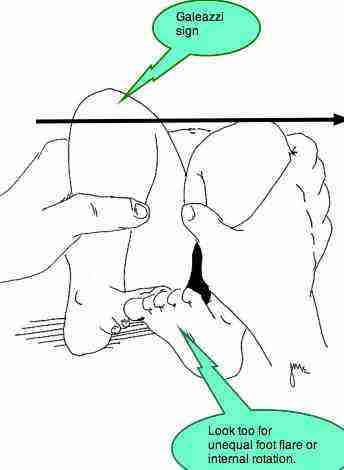 Looking for foot flare and a short leg accompanied by an obviously skew pelvis, and associated scoliosis, is part of the normal chiropractic examination of every patient, so it's no surprise that chiropractors may be tbe first to discover less severe cases with negative Hip Dysplasia Ortolani Galeazzi Barlow signs, but certainly with "lateralisation of the head of the femur" as it's called in Holland.

Asymmetry of the gluteal folds is another perhaps less obvious sign.

In the both the child and adult pain in the groin and anterior thigh may be the presenting complaint.

"Any limp in a child should be considered abnormal. The diagnosis can be quite variable, but an underlying etiology must always be pursued."

Fortunately, diagnosed before three months of age, the use of the Pavlik Harness is completely successful in most cases. It's is neither irksome for the small infant or mother. Missed... too ghastly to contemplate.

It's my opinion that if discovered, DHD in the infant should be managed by an orthopaedic specialist who deals with such cases on a regular basis. Perhaps in consultation with a chiropractor who has interest in paediatrics.

is that no chiropractor should be the first to uncover a case of Hip Dysplasia Ortolani Galeazzi Barlow in a country with a modern pediatric agenda. These cases should have been diagnosed within the first few weeks after birth.

What concerns me is that cases slip through under the radar, mostly mild cases, but there are plenty of them. Barely a week goes by when I don't encounter a new case of groin pain in a young adult with associated hip dysplasia; and remembering that groin pain and hip pathology is not the reason most patients consult a chiropractor. I suspect that, like diabetes, there are thousands of cases of DDH walking the streets, unaware that they walking on a time bomb.

These mild cases which at birth had no obvious dislocation or subluxation, or were missed, but on X-ray as children or adults clearly have Developmental Hip Dysplasia. Those are the people where chiropractic has a vital role to play.

Miss them, and many are doomed to premature hip disability and pain. Ultimately they will simply be diagnosed as hip arthritis. But had it been diagnosed thirty years earlier... 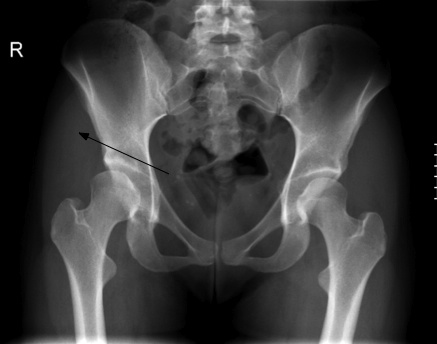 "Individuals with acetabular dysplasia usually develop through childhood and adolescence without symptoms or knowledge of their abnormality." 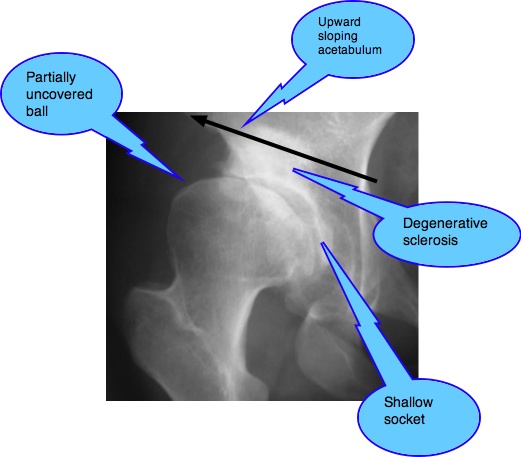 We speculate, but firmly believe that much of this hip arthritis can be prevented by early detection and correct chiropractic management. It's not rocket science.

A sixty second examination of the hip gives the shrewd clinician a pretty sure indication of whether the patient may have DDH. The range of motion is grossly increased in the young patient, gradually becoming painful, and ultimately stiff and arthritic. Detected early...

Is the increased range of motion simply hypermobility, with a normal femoral head and acetabulum, or incipient acetabular dysplasia?

The heartbreak of a missed diagnosis

Children and young adults with mild cases of Developmental Hip Dysplasia, because of the greatly increased range of motion of the hip, may excel at ballet, modern dancing, gymnastics and other sports. Persuading them and their parents that they must choose other activities less traumatic for the hip creates the typical clinician dilemma.

Opinion of other professionals is obviously mandatory, but sometimes is not worth a dime...

"I was diagnosed with osteo arthritis 18 months ago but I believe I have hip dysplasia.

My daughter has just been diagnosed with hip dysplasia at 28 and my sister was at the age of 21.

I am 45 now but first had knee problems at the age of 25. My knee occassionally just gave way!! Not much pain really. Then about 4-5 years ago when I started going to the gym regularly and cycling a lot my left hip would 'dislocate' it didnt hurt much but felt really awkward and sometimes took days or weeks to go back in. I didn't go to the GP until 18 months ago when the pain got bad and I couldn't walk properly. I also noticed I had the same gait as my sister!

As a child I excelled in athletics and was very flexible (I always amused people with my unusual sitting position of kneeling with my legs out to the side!) I can't do this anymore and cannot walk far. I also now have more pain in the right hip and the x-ray shows the right hip to be worse? Could this be where I have compensated for the left hip pain? Might I just have osteo arthritis or do you think it sounds like dysplasia?

And does it matter for my outlook anyway? Please help me..I don't want to go back to my GP as they have little sympathy."

An ounce of advice, a very specific set of exercises done daily for life, and a minimum of chiropractic care thirty years ago would have saved this lady a lot of the current drama. But the past lies fixed in concrete, one can only profitably look to the future, rather than bemoaning what should or should not have been done.

Both the ball and acetabulum are living tissue, capable of regeneration and remoulding. Much research now proves that hyaline cartilage can and does regenerate given the right environment.

Doing nothing, the most common scenario, until the patient has pain in the groin and difficulty walking leads to the inevitable deterioration with time and the likelihood of an early total hip replacement, or other dire procedures such as Peri-Acetabular Osteotomy.

The young adult with a greatly increased range of motion of the hip, particularly if associated with pain in the groin, should be regarded with a high degree of suspicion. X-ray of the pelvis to assess the shape and size of the acetabulum is mandatory.

An ounce of prevention still remains better than a pound of cure.

From the chiropractic coalface

A 24-year old woman presented six months ago, complaining of chronic thoraco-lumbar pain. There was no mention of hip or groin pain.

Routine examination of the hip revealed greatly increased range of motion of the right hip and, on palpation extreme tenderness of the hip capsule and Pectineus and Adductor magnus muscles. The insertion of the Psoas major in the upper femur was red hot.

X-ray examination of the spine revealed no abnormalities but, in the radiograph of the right hip, the typical shallow acetabulum and partially unroofed head of femur typical of DDH were to be seen. She was not a breech birth, and had no history (I asked her mother to accompany her for the Report of Findings) of hip problems as an infant or in childhood. Certainly there was never mention of HIP DYSPLASIA ORTOLANI GALEAZZI. 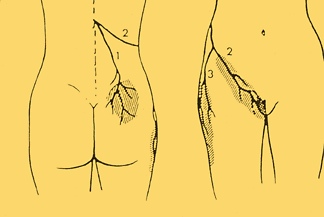 It remains speculative but many patients with hip dysplasia develop mid lumbar pain and ultimately degenerative disc disease. Is this mid lumbar disease mediated via the femoral nerve, or through abnormal muscle tension; perhaps via the psoas muscle?

What is hip dysplasia?

Grasping what hip dysplasia is in the child is important for parents where there is a family history of hip arthritis, paediatricians and chiropractors.