Arthritis and obesity  is a review of the research by Dr Matthew Constas, PhD.

Obesity-related diseases are becoming a quickly increasing problem in the Western world, the result of an extreme obesity epidemic that now rivals hunger-related health problems as a primary cause of worldwide morbidity and mortality. Many common diseases have been linked to obesity, including osteoarthritis (OA).

Although OA is the most prevalent joint disorder, obesity is also known to be a factor in developing other musculoskeletal conditions that can result in joint pain and disability.

Obesity As A Risk Factor For Arthritis

OA is a common condition, affecting 70% of senior citizens who are older than 65. This accounts for a staggering 27 million residents of the United States—12.1% of adult Americans.

The world's population is aging and becoming overweight at a fast pace—two of the major risk factors for developing OA. The social and economic burden resulting from the prevalence of OA is distressingly high.

The symptom most strongly associated with OA is joint pain, which is the result of a loss of articular cartilage. Pain is most often experienced in the hip, knee, and hand joints.

Those still in the first stages of OA only have pain when they use the affected joint, but as the disease progresses the pain becomes more constant. Eventually sufferers experience pain even when their joints are resting and when they are asleep.

Treatments for osteoarthritis are focused on pain relief, and there are both surgical and non-surgical options available. Surgery to treat osteoarthritis is a last resort for those whose symptoms are severe and resistant to other forms of treatment. For most osteoarthritis sufferers, symptoms can be controlled through the use of medication, proper nutrition, acupuncture, and changes in lifestyle.

A pharmacological approach to therapy is common, achieving pain relief through the use of non steroidal anti inflammatories, Advil, Aleve, Orudis and analgesics like tylenol.

However, a number of people experience side effects when using these medications, most frequently gastrointestinal problems.

As an alternative to these medications, increasingly more people are turning to natural formulas for pain relief. The controversial and partially encouraging results of the Glucosamine Chondroitin Arthritis Intervention Trial (GAIT) have spurred on this trend [1]. Dietary supplements containing glucosamine or chondroitin sulphate are now taken by around 5 million Americans.

Obesity and Arthritis : The Link

Numerous research studies have shown that there is a positive relationship between weight and OA. Results of population-based studies have been consistent in finding that overweight people are at an increased risk of developing OA when compared to people from the same population who are not overweight.

A large Australian study found that overweight adults are at double the risk for being diagnosed with OA than adults of a normal weight. This study of 7500 people found the relationship between BMI (a measure of excess weight) and obesity to hold even after adjusting for socioeconomic status, age, and sex.

Women with a BMI greater than 26.4 were at twice the risk of developing osteophytes than those with less than 23.4.

A survey of 858 people in Scotland found that lower limb joint pain was positively related to obesity; participants who were stout reported twice the frequency of pain in the hips, knees, and ankles; and feet too.

According to a survey of 5000 Americans, the risk of knee OA doubled with every 5 unit increase in BMI.

Additionally, reviews of lists of patients scheduled to receive joint replacement therapy have shown that they tend to weigh significantly more than healthy people of the corresponding age and gender. 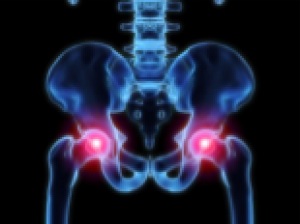 The mechanical load experienced by the hip joint is more broadly distributed than that of the knee, meaning that the hip joint is subject to less stress. This explains why obesity appears to have a weaker association with hip arthritis than with knee OA.

One cross-sectional study, consisting of 2358 people, failed to find evidence of any link between obesity and hip OA. Other studies have reported a positive correlation between hip OA and obesity. For instance, information collected in the USA Nurses study found that those with a higher BMI at age 18 were at 5 times the risk of needing hip replacement in the future.

A primary explanation for the effects of obesity on OA is that carrying excess weight places more stress on the joints. Since hands are not weight-bearing, it seems logical that hand OA and obesity would not be related. However, being overweight does actually appear to increase a person's risk for developing OA hand arthritis [3]. The implication of this fact is that the increased risk of OA in obese people is not solely the result of mechanical strain. Other causal factors are involved in arthritis and obesity.

Which Comes First: Obesity or OA?

Demonstrating a relationship between obesity and OA isn't enough to prove that excess weight is a cause of OA. For example, an alternative explanation could be that the significant knee pain experienced by OA sufferers reduces their amount of physical activity and leads to weight gain.

This question of causality has been addressed by several studies implementing a longitudinal design [4]. The Framingham Heart Study followed up with 1420 subjects over the course of 36 years. The results showed that those who were overweight when the study began, at age 37, were at an increased risk of developing OA by the end of the study, when they were 73. Since knee OA was extremely rare at the age of 37, this indicates that obesity was the causative factor rather than OA.

It has been demonstrated that excess adipose tissue is a significant risk factor for OA, with obesity consistently being shown to increase the risk of developing osteoarthritis of the knees. Obesity has a smaller but still notable positive effect on the risk of developing OA of the hand and hip. This provides support for weight reduction as an essential component of OA treatment, along with the use of arthritis medication supplements, especially for those with knee OA.

Dr Matthew Constas, PhD, has an extensive background in medical science and is particularly interested in the association between obesity and potentially prevented conditions such as OA. He keeps a close eye on the latest scientific research being conducted on obesity, weight loss, and nutrition.

BMI can be classified as follows:

1. The omega-3 oil in fatty fish like salmon and mackerel, flax oil and walnuts will to some extent ameliorate the effect of obesity and arthritis.

2. So too, coloured fruits and vegetables like strawberries and broccoli have been shown to reduce the pain of arthritis.

Part II of a review of the scientific literature by Dr Matt Constas on the relationship between osteoarthritis and obesity. WEIGHT LOSS FOR ARTHRITIS ..

Vegan weight loss is something of an anathema; not many are obese. However we carnivores can learn a lot from our vegetarian friends.

They get most of their protein from pulses; these are legumes that are found in pods and dried for their seeds. It's stretching a point but you could include green beans and peas.

Mostly though we are talking about chickpeas, dried beans and lentils. A meta-analysis of 21 trials found that simply including one helping of pulses daily to your diet would significantly increase your sense of satiety and weight loss.

If you were to replace a high GI starch such as a helping of potatoes with a pulse, then the effect becomes quite dramatic. This quick hummus recipe is probably my favourite; it's so easy to make and will turn a dull green salad into a treat.

For the chiropractic profession, arthritis and obesity are a serious problem. Unfortunately we can lead you to water, but can't make you drink; at the end of the day each of us is responsible for our own health.