Anterior thigh pain can be very severe especially at night. It may be the sign of hip arthritis, or a condition such a dysplasia of the socket, or lumbar stenosis in the mid lower back.

This page was last updated by Dr Barrie Lewis on 9th July, 2019.

The sacroiliac joint may be involved and sometimes it may be trapped lateral femoral cutaneous nerve in the groin. In short, it's a complex business and a thorough examination is called for.

Less common, though to be considered in the smoker, is a blocked artery in the groin; it's characterised by leg pain when walking, but immediately relieved when you rest.

On arrival at a friend's home on a trip, my host was complaining of severe antero lateral thigh pain, with minimal or no back ache.

Immediately I knew there would be difficulties. Radiating leg pain in the absence of back symptoms is never easy. To make matters worse, on examination there were clear indications of two different nerve roots involved.

Although he wasn't complaining of lower leg pain, on forward bending he had a tightness in the calf, and the Slump test for sciatica was strongly positive at level 4 in the right gastrocnemius muscle; there was no LBP. My thoughts were of a S1 nerve root lesion, perhaps L5.

Lasegue's and Braggard's tests were strongly positive in the posterior calf.

Worse, on extension he immediately had severe pain in the right buttock and the side and front of his thigh; most likely the L4 nerve root.

The first had the appearance of a bulging disc at L4 or L5. The second a degenerative facet at the L3 L4 level affecting the femoral nerve.

Fortunately there were no hard neurological signs.

In the best of situations this wouldn't be easy. Adjusting his spine on a bed was a nightmare.

Old x-rays were unclear and I quickly realised possibly misleading; they showed degenerative change to the L5-S1 joint but the spinal fixations were at L3 and 4. Anyone trying to make a diagnosis based on the radiographs alone would have been at sea.

Luckily after six attempted treatments on the very soft bed, and two at a local chiropractor's office on a proper adjustment table, he was eighty percent better.

On handing my host over to the local DC, I was somewhat disturbed to hear that he would be required to pay up front for 30 treatments. Worse, after watching me examine and treat my host, the local quack informed us that he was a straight chiropractor; no examination would be done, or diagnosis made; he only treated subluxations based on new x-rays that must be taken.

I was at pains to point out that the new x-rays would almost certainly show L5-S1 degenerative change but that the pain was responding to the treatment of L3 and L4. The Slump test for sciatica was almost negative by the time I left.

Anterior thigh pain especially if it's also in the groin and side of the leg is a diagnostic nightmare. 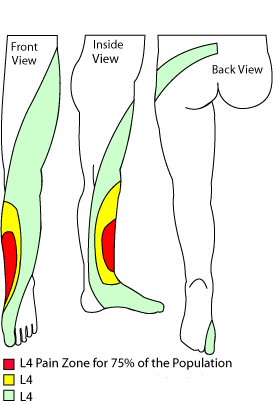 It was true that there was some conflict; was the sciatica an L5 or S1 root. My hands were pointing to the former, the xrays to the latter. There was little on the radiographs to point to a femoral nerve lesion, but the examination and fallout certainly did.

Needless to say, I have little time for chiropractors who will not, and do not examine their patients. Xrays can be very misleading; a scan would have told far more.

In short, making a clear diagnosis is often not possible without an MRI scan. At each level of the spine, it's possible for two different nerve roots to be affected; if it's a medial herniation it causes a quite differen level of leg pain as compared to the lateral prolapse, or a facet syndrome.

Nothing short of a very thorough examination enables the clinician with any certainty to correct the subluxation; over the years I have more cases than I care to remember where, after the failure of my chiropractic help, a scan revealed I was treating the wrong level.

Roll on the day when every case of serious anterior thigh pain is first scanned; it would save insurance companies and you the patient a great deal of time and money; and pain.

The femoral nerve emerges from the mid lumbar spine, whereas sciatica from lower down. It is often the source of anterior thigh pain, crossing over to the inner lower leg.

A femoral nerve lesion can be just as painful as sciatica. Weakness at the knee is often a feature.

Sometimes with severe lower back or leg pain a short period of no sitting or standing is mandatory; I call it massaging bed rest with exercises; prolonged it will only aggravate your problem. Perhaps a few days and, in exceptional cases a week or two.

Whilst on your back make sure you are using alternating ice and heat treatment. Appropriate lower back exercises too are vital.

Then some massaging bed rest is helpful; whilst lying on your side, not on your belly. Has your spouse got the right hands? Perhaps a professional sports masseuse might be a better person.

Every hour, during the day, get up and move about for as long as possible.

Art and science of chiropractic

Good health care is an admix of art and science. To provide a good adjustment is pure art; to know what to adjust, and in what direction to thrust with the right amount of force is all about science. Look for those who specialise in the art and science of chiropractic.

Meralgia paresthetica is caused by a pinched nerve in the groin; and in the back too. Lateral rather than anterior thigh pain is the norm.

One of the slips from the femoral nerve passes through the groin and to the side of the thigh. It's a pure sensory nerve, and so has no effect on the quadriceps muscle, but the numbness and stinging lateral and anterior thigh pain can be very unpleasant.

However, this lateral femoral cutaneous nerve, as it is known, is quite often involved in a "double-crush" syndrome, affected in the mid to upper lumbar spine, and in the groin.

If you google meralgia paresthetica you'll find that medicine has no effective treatment, and no chiropractic research has been done. Yet, I find that chiropractic help, directed both at the lumbar spine, and the groin is very effective.

Mayo clinic recommends weight loss, looser clothing and analgesics such as aspirin initially and then corticosteroid injections and antiseizure medication. 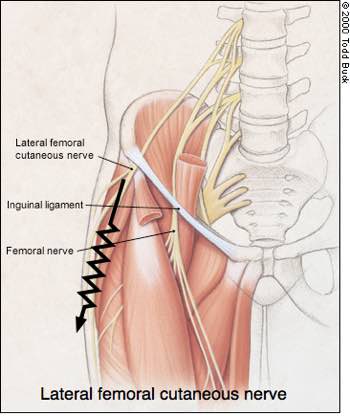 Chiropractic is a health science based on the premise that frankly pinched and irritated nerves cause in the first instance radiating pain down the limbs, but also may affect the organs supplied. Anterior thigh pain is more common in the older person, back of the leg in the younger, but it's no hard and fast rule.

Orthopaedic tests such as straight leg raise and Braggard's test are often negative for a femoral nerve lesion since they are for the sciatica.

Coughing, sneezing and bearing down on the toilet often are the sign of a slipped disc; they all require you to do the so called Valsalva manoever.