Valsalva manoever is one of the tests that is used to confirm a slipped disc, primarily in the lower back.

It has been well acknowledged that even amongst the best clinicians in the world there is often disagreement concerning what may actually be causing the pain in your lower back. And research shows that without that assurance, surgery is usually in vain.

The same might be said in the chiropractic setting, the difference being that our procedures are far less invasive; and, if treatment for a slipped disc at one level say, is not succeeding, one can always adapt the adjustment technique. Perhaps the pain was coming from the sacroiliac joint.

There are many structures in the lumbar spine capable of causing pain. The valsalva maneuver is just one of the many tests that your chiropractor will perform in coming to a correct diagnosis; that then leads to the appropriate treatment.

For a variety of reasons, patients often decide not to rush to the doctor or chiropractor when they have an episode of lower back pain. That in itself is not a bad thing; given common sense, and a gentle set of exercises many conditions will pass over of themselves.

However, the presence of a positive valsalva manoevre, should caution you that this may not be just a passing strained muscle. Severe leg pain may be just around the corner. Fortunately it's a test you can do at home when you have an attack of LBP.

When it's positive I recommend you at least stay at home for a few days with greatly reduced sitting, no bending, gentle exercises and intermittent bed rest coupled with pelvic tilts and pulling each knee to the chest; an ice massage followed by heat, cold hot therapy, is the best treatment for pain. Don't get into the bath, and definitely don't try touching your toes.

Also, if the valsalva maneuver is positive, try very hard not to cough or sneeze, or bear down hard on the toilet. Our quick constipation relief page is worth a perusal.

To perform the valsalva manoever sit upright in any chair, and take in a deep breath. Now bear down as though you are trying to have a bowel movement, but make sure your mouth is closed, your nose stopped.

You may even want to pinch your nose.

In effect you are breathing out, but against a closed airway.

This has the effect of increasing the pressure in the chest cavity, affecting the heart and peripheral blood system.

Some authorities speculate that it may be caused by the increased pressure of the venous blood vessels within the spine.

Whatever, pain in the lower back, and perhaps down the leg, is a sure sign that you may have injured a disc in your spine.

You should then do two further tests.

Should you have leg pain, and particularly if the valsalva maneuver and Slump test are positive, I recommend you consult a professional for advice and probably treatment.

I cannot let the opportunity slip here to point out that interprofessional research indicates you are more likely to end up under the knife if your first consult a medical doctor.

The reasons are many, but I believe that if you can reduce that slipped disc within twenty four hours everything is much simpler generally. After that severe swelling sets in and it becomes more difficult.

A slipped disc, particularly if the bulge is into the foramen or into the spinal canal causes severe arm or leg pain. It's a serious problem, treated successfully often but not always in the chiropractic setting.

Whether you go for surgery, or consult a chiropractor, you'll have to stop for a period, go for treatment and go through rehab exercises.

Continue with those exercises, otherwise a relapse is the rule. It's a weak point in your back for which there is no cure.

Repeated episodes with more surgery, or chiropractic care is the rule unless you accept the fact the lifetime of back exercises is your lot. That shouldn't be a problem; you give your teeth the same degree of care.

Those exercises take only a couple minutes before arising, and at night; do them on your bed every single day. 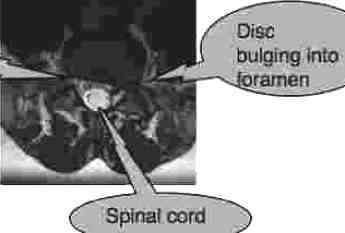 Chiropractic treats patients with a positive valsalva manoever every single day; the trick is to understand the seriousness of it, accept that your must follow these slipped disc rules for a period and undergo treatment to reduce the bulge.

If you don't the pain is likely to radiate down the leg, and that's when the surgeon starts to get excited; that you don't want.