Treatment for costochondritis is largely unproven and frankly ineffective. I as a chiropractor struggled with the condition for twenty five years before coming up with a protocol that is still not researched, but yes, it does work. It quite likely won't cure you, but if you're satisfied with a sixty odd percent lessening of pain, then I recommend it.

The condition can also affect the sternoclavicular joint with similar pain, but often then with associated pain and tingling down the arm that does not follow a dermatomal pattern. It is in effect a variation of thoracic outlet syndrome.

If there is actually a palpable lump over the joint then it's known as Tietze's syndrome.

The causes of costochondritis may be trauma, for example a fall on the fist when skating. A severe bout of coughing or sneezing can set it off, usually associated with a sharp pain in the shoulder blade area; a tight chest ensues and there may well be shortness of breath.

Lifting heavy boxes above the head is another cause.

Because the pain is often located over the heart, or under the breast, there is often considerable anxiety associated with the condition. Since it follows the rib, there is often discomfort in the armpit, or lower, depending on which joint is affected.

Rarely an infection such as TB or a tumor can cause it, but that's really not common. I've never seen that in chiropractic practice in 35 years.

As the diaphragm is also attached to the underside of the ribs, pain after eating and stomach upsets are common complaints.

There are reports of costochondritis and Tietze's syndrome after breast surgery. 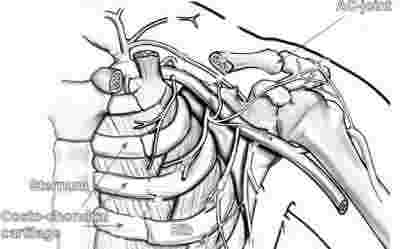 Thus it's good when making an appointment with your chiropractor for treatment for costochondritis to be able to answer questions about when the pain began and if it's getting worse and whether any lung, heart or breast conditions need to be considered.

Have you recently been coughing a lot, and do deep breaths cause pain? Are there any other medical conditions that might have a bearing on your  costochondritis symptoms? Shortness of breath in particular needs to be considered.

Treatment for costochondritis with chiropractic certainly helps reduces the pain but may not cure the condition.

To my knowledge there's no scientifically proven treatment for costochondritis. It's a condition that both medicine and chiropractic struggle with. It took me 25 years to come to terms with it, and work out a protocol that is reasonably effective. Patients gain substantial relief, but few are cured.

First it needs to be acknowledged that a vigorous manipulation in the middle of the back will probably aggravate the condition and, in fact, overly enthusiastic chiropractic treatment is one of the causes of osteochondritis.

The effective treatment for costochondritis involves a gentle anterior thoracic chiropractic adjustment, and soft tissue treatment along the course of the intercostal nerve and the rib at the costochondral junction.

Since the condition may also affect the clavicular sternal joint, mobilisation of the collarbone and the AC may be important.

Alternating ice and heat treatment in the shower should be done daily. An ice block, directly on the costochondritis pain spots, followed by hot water is ideal.

Then using a little cream, massaging between the ribs at the junction with the sternum is particularly relieving. 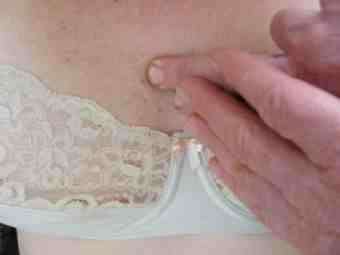 It does not need to be emphasised, but clearly taking a friend or partner along for treatment of costochondritis makes sense. Treatment encroaches on the breast, making both doctor and patient anxious. Alternatively ask if a secretary can be present. Sexual advances by a chiropractor certainly does occasionally occur. 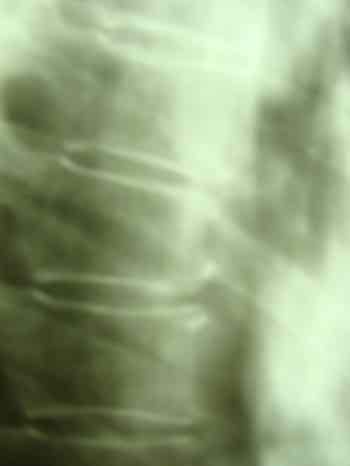 Mrs M, a fifty year old woman, has had a particularly stressful life. Forced to go out to work because her husband failed repeatedly in business, she became the breadwinner whilst he stayed at home for long periods.

An old injury to the mid thoracic spine whilst joyriding as a teenager appears to be the primary cause of her costochondritis. Whether the compressed and elongated bone is the result of a spinal fracture thirty years ago, or a mild dose of Scheuermann's disease, remains conjecture and a matter of opinion.

Certainly she has shoulder blade and armpit pain radiating to and from the spine to the breastbone; and stomach upsets and pain after eating.

Fortunately there was no obvious soft tissue swelling over the costochondral joints. Nevertheless, gentle mobilisation of the mid thoracic spine caused immediate severe pain in and around the breastbone. There was the extreme rigidity that is the hallmark of Scheuermann's disease.

She had never heard of Tietzes syndrome and confessed to deep seated fears over her heart. Her blood pressure was seriously raised at the first consultation at 185/105.

Upper cervical pain was in fact the presenting complaint, but every chiropractor knows to tread warily when manipulation of the neck is the otherwise treatment of choice in the hypertensive patient.

Fortunately she responded very quickly to gentle activator treatment of her neck, and an anterior thoracic adjustment.

After only three treatments she stated that the pain in her neck and breastbone was 70 percent reduced. A repeat of the previous treatments plus stiff neck exercises was the protocol then followed.

A consultation with her GP, gave a tentative diagnosis of white coat high blood pressure, but I was not happy about giving an upper cervical adjustment.

Update: The good news is that the treatment for this lady's costochondritis has been very successful. Tenderness remains to touch, but she has no frank pain in the chest any longer. Also her neck is 80% better despite the very conservative gentle treatment. The bad news is that her blood pressure is as high as ever. Life threatening high.

Tietzes syndrome is a grade IV costochondritis, or -osis.

All of these symptoms, accompanied by a swollen tender lump over the costochondral junction is pathognomonic of Tietze's syndrome.

In fact in my book, Tieze's syndrome is but a grade IV ostochondrosis. Mostly this is a non inflammatory condition, hence the osis, instead of itis, which is why it doesn't respond to anti inflammatory drugs.

This Tietze's syndrome casefile may give some further insights.

Patients are usually offended and angry if a doctor broaches the subject of their weight. They have tried every diet in the book, and simply cannot lose weight.

I address the subject of weight and smoking, once only, but very clearly, and then hold my tongue; we are ultimately responsible for our own health.

The woman above was at least 50 pounds overweight, hence her alarming blood pressure of 185/105 on three different drugs to control it. It's life threatening. I recommended instead of following any diet that she learn about the meaning of the term "glycemic index, or GI" of starches, and avoid high GI foods. White rice and white bread are the chief culprits. 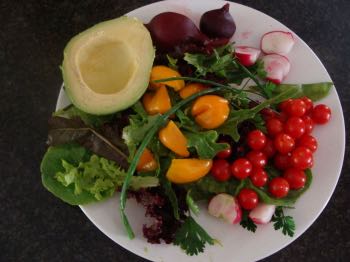