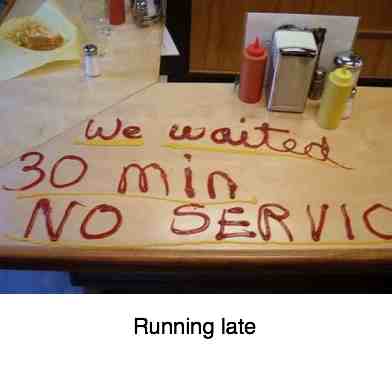 Running late happens in every doctor's office periodically; but it shouldn't occur at every consultation. If it occurs regularly you should take the matter up with either the doctor himself, or at least his staff.

It's quite unnecessary and simply sloppy practice; don't smolder; let your grievances be known no matter how good the chiropractor. Having said that there have been times in my life when so many patients were appearing in my appointment book that I was run ragged; at the time I was just an employee, a pawn in the owner's money making dreams.

I eventually left, under a cloud as it so happens which you can enjoy in Stones in my Clog; anecdotes from the coalface.

It's what happens when the unexpected occurs. Try and be patient, and just be grateful that it isn't you who is taking up the doctor's time. Next week it could be you.

Like the rest of the world your DC is most likely running on a tight schedule. It's the only way to get through the patient load without having to work at the coalface for a twelve hour shift; and then the unexpected happens.

Mrs Jones was scheduled for a routine maintenance consultation, and she's just had a nasty whiplash.

Or, Mrs van der Post lifted her grandchild out the cot, and has unexpectedly slipped a disc.

Mr Delport took his small son to the football, unwisely carrying him on his shoulder, and bingo he has severe pain running down his arm. He walks into the clinic with his hand on his head; Spurling's sign and the upper limb tension test are strongly positive. He's hurting.

Mrs Cope had an operation on her neck for pain and tingling running down into the ring finger and pinkie only inexplicably the surgeon operated at the C5 C6 level; there was no relief, of course. So he performed another operation on the brachial plexus; that didn't help either. Then he decided that it must be an ulnar nerve lesion, so the problem was in the elbow; yet another operation was performed. Mrs Cope is beside herself and asks if you would examine her, and advise.

Running late is what happens when the unexpected occurs; try and be patient just be grateful that it isn't you who is taking up the doctor's time.

You walk into your Chiropractor's waiting room, and it's unusually full, with people glancing anxiously at their watches; he's running late again.

Do the sensible thing ...

Inquire from the secretary how late the doctor is running. If you have another important appointment, simply ask if you can reschedule, and leave. If not, pour a cup of coffee, look and see if he has a Bernard Preston chiropractic book on the shelf and settle down for a half hour of indulgence; if not look for other material on your particularly problem, or politely ask why there are no Preston books! 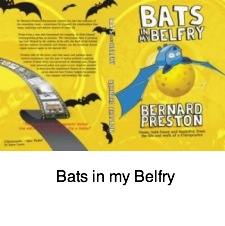 If it happens regularly, then politely complain. However a ten to fifteen minute delay is not unusual, and you should schedule your life accordingly.

Today a new patient arrived a day early by mistake. He's traveled a long way to have me examine a sprained ankle that hasn't resolved. In fact the pain is getting worse. Fourteen months ago he fell two metres from a ladder and despite medical treatment he is walking with a severe limp.

It turns out they missed a serious ankle fracture, and now he has nasty arthritis developing; it means I'll be running late.

A very acute lower back pain patient from yesterday arrived ten minutes late; flexing his head to get into the car proved very difficult. He's a very happy man as the stabs are fifty percent less and he can stand upright today, instead of looking like the Leaning Tower of Pisa. But he's still obviously still very miserable.

So who gets examined and treated first? Running late is the norm, unfortunately.

At 8 am and 2 pm your chiropractor is likely to be running on time. If you have a really busy schedule, try and avoid mid morning.

On your way out, if you're thoroughly irritated, try and not fall down the stairs. It's amazing how things go wrong when we're irate. You might just end up as the next ankle joint pain casefile.

Or have an accident on the way back to work because you're in such a hurry. With the best will in the world, these things happen in every chiropractor's clinic. This too will pass, and the confusion of today will turn into the normal scheduling of tomorrow.

If he or she is the best chiropractor in town, and he's always running late, then you have a hard decision to make. Find someone else, or bring your laptop with you, and ask if you can log into their wifi; or a good book.

How many books do you digest in a year? Most people read fewer than 500 in a whole lifetime; that's a very sad fact. Spending a few days in private exploring the mind of a very interesting person is not a privilege; it's everyone's right, and even some might say a duty.

Right now I'm in the midst of a Louis de Beniere. What a staggering author he is. Have you ever heard of him? Captain Corelli's Mandolin is one of my all time favourite books. Birds without wings is even better.

Smart folk always carry a book or their Kindle with them for just such eventualities.

Lower back pain patients fill chiropractic clinics; it's what consumes more than half of our time. It could be a slipped disc, or a sacroiliac joint fixation that is putting the piriformis muscle into spasm. It may be causing numbness in tingling down the side of the leg, or a lumbar facet syndrome; each and every case needs to thoroughly examined and the person reassured but it means that your chiropractor may be running late.

There are a host of chiropractic conditions causing lower back pain, and quite a few medical ones too.

Sometimes it can be so severe that running late is inevitable. The patient is in trouble and the chiropractor too; with his secretary, and with you.

Simply ask whether you should come back another day if it's a routine consultation; everyone with breathe a sigh of relief.

Healthy living tips are another reason that your chiropractor may be running late; so often the lower back pain or sprained ankle are aggravated by a lack of natural anti inflammatories in the diet, or obesity or simply poor nutrition.