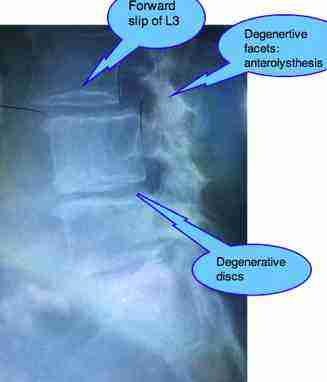 Degenerative lumbar disc disease case file with pain radiating down the front of the thigh.

This page was last updated by Dr Barrie Lewis on 12th August, 2019.

A 83 year old woman two months ago stumbled at home one evening; the next morning excruciating pain began radiating down her anterior thigh. She was about to embark three days later on an overseas trip, and decided to travel anyway; but she was miserable.

She consulted a chiropractor in the UK who said she had a sacroiliac condition, and prescribed a belt which didn't help. In her defence, the chiropractor didn't have the xrays that clued me in, though SI conditions don't typically cause pain running down the front of the thigh.

On her return home she consulted her doctor who sent her for xrays; the conclusion was spinal stenosis and hence this degenerative lumbar disc disease case file. There was nothing to be done, and she must learn to live with the pain as she was too old for an operation.

So, what did we find in the examination of her back and leg?

For her age she was a strong and independent, drove her own car, and lived alone in a small cottage.

Ranges of motion of the lumbar spine were reasonably good except that Kemp's test provoked immediate pain in the anterior left thigh.

The femoral nerve stretch test was strongly positive, but there was no weakness of the quadriceps muscle. Surprisingly the sciatic stretch of Lasegue provoked a little pain in the anterior thigh; it often doesn't when a high level is involved. Reflexes and the skin sensation were normal. There was no weakness. Ranges of motion of the hips were normal.

There was a right sacroiliac fixation, but only one of the four SI syndrome tests, the SI compression orthopaedic test, was positive. 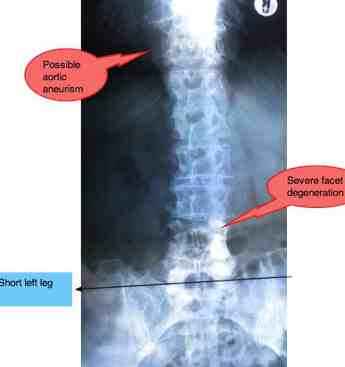 Degenerative lumbar disc disease Case File ...not difficult to see the probable source of her pain. This sort of wear-and-tear spine is not that unusual for a woman in her eighties. Most of us have taken a tumble or two, worked hard in the garden... and together with that there is often increased arthritis associated with a short leg. A small shoe lift, fifty years ago would have made a big difference to her condition today. Do you have a short leg?

The radiographs confirmed the mildly short left leg, and proprioception challenge tests indicated there would be benefit from a full insert of 3mm in her left shoe.

There was advanced degerative lumbar disc disease at at least three levels, and degnerative facets allowing a 25 percent forward slip of L3, known as an anterolysthesis.

In short, she was suffering from the symptoms of lumbar stenosis, or severe narrowing of the spinal canal.

Calcification of the abdominal aorta was noted on the lateral radiograph and there was concern over a possible aneurism seen on the AP but not mentioned in the radiological report.

Because of the concerns about the abdominal aneurism, we followed a conservative approach using prone drops on the pelvis, following the Thompson protocol, plus gentle sideposture roll drops. That's a procedure the appears very like a normal chiropractic manipulation, but with no intention of achieving a cavitation, or click.

We decided not to begin immediately with a shoe lift, depending on how she progressed.

We have gave Mrs F a very basic set of exercises in the first week, followed by more extensive rehab as she improved.

She now comes once in six weeks for maintenance care. Neither I nor anyone is going to cure her back. Maintaining the improvement is now what is important.

Mrs F responded unbelievably well. After just one treatment she had  50 percent less pain in the leg, and after three she had no pain at all. Miracles we do at once, but the impossible takes a little longer; it's not always like that. Some backs are very stubborn and improvement only comes after weeks of treatment, and then the improvement may be slow.

An abdominal aneurism is a time-bomb. Once they reach 6cm they tend to progress... and then suddenly burst.

Ever since an older patient in otherwise good health died in surgery for an aneurism (which I referred him for), I've been less inclined to refer patients like Mrs F for surgery. It's part of my philosophy of life: sudden death is a blessing in your eighties. Something is going to get her after all, and a burst aneurism is decidedly better than cancer, or Alzheimers, or...

The causes of aneurisms

There are a number of causes of aneurisms. Almost invariably there is uncontrolled high blood pressure, a history of smoking or alcohol abuse, raised cholesterol, homocysteine, and certain drugs.

Homocysteine is a toxic amino acid formed in the body when there is a deficiency of certain of the B-vitamins. It degrades the inner lining of the blood vessels making strokes and aneurisms and heart attacks more likely.

Taking a B-complex lowers the risk of stroke by 25% (Hope-2 study). The research stress that prevention is better than a cure; the neurological deficit after a stroke is often irreversible.

The B-vitamins are found in green leafy vegetables, whole grains, nuts and seeds, mushrooms, eggs and a host of foods. If you eat a natural, whole-grain, fruit, salad and veg diet you probably have no need to be concerned, but even so I advocate a B-complex supplement every day in the patient at risk. They are so vital...

The SIJ is commonly involved in many low back and pelvic conditions. A sacroiliac subluxation may be the primary cause of the pain, or it may be a secondary condition.

Evaluating the pelvis is vital in such conditions, but the right sacro-iliac fixation was a bit of a red herring. Clearly the primary problem in Mrs F's DEGENERATIVE LUMBAR DISC DISEASE Case File was the forward slip of L3; lumbar stenosis.

Many medical sites now grudgingly acknowledge that manipulation is the treatment of choice for low back pain; that would include a degenerative lumbar disc disease case file. They have no option as their own research proves it convincingly, but they name two red flags:

On both counts, Chiropractic would have been red-carded in Mrs F's case.

To my mind, Chiropractic should be the first port of call for pain running down the leg (did you know that medical research found that if you FIRST consult your medical doctor for lower back pain, you are more likely to end up under the knife than if you FIRST consult a chiropractor?).

And obviously we adjust our techniques and are far more gentle with women in their eighties. Despite that, I acknowledge (to my shame) eight  cracked ribs in thirty four years of practice.