Bakers cyst knee makes bending the joint painful because of the large mass. 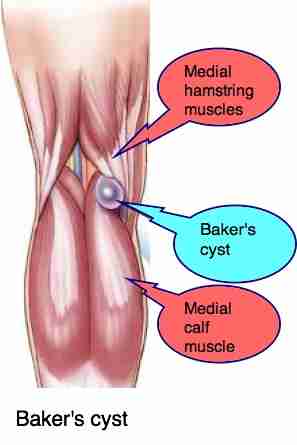 Unlike Housemaid's knee, also known as Patello Femoral Pain Syndrome which is directly caused by too much work whilst on the knee, or a fall on the patella, a Baker's cyst has nothing to do with kneeling or baking! It's named after a surgeon.

Baker's cysts are painful swellings behind the knee, more on the inner side of the leg. In the so called popliteal fossa so it's sometimes called a popliteal cyst.

Between the insertion of the muscles behind the knee, on the inner side, medial, lies a small bursa that prevents friction between the tendons and the bone.

Specifically, the semimembranosis branch of the hamstring behind the upper leg, and the medial gastrocnemius behind the lower leg.

In certain conditions of the knee, in particular arthritis, a connecting tube develops between the sac of fluid in the knee, the synovial fluid, and the bursa. If the knee is suddenly forced into flexion, for example, the fluid may squirt into the cyst.

So, what are the causes of a Bakers cyst?

The most usual occurrence is the patient with an arthritic knee, who then in a moment of enthusiasm goes through some over-exertion like they used to do in their long-lost youth. A long hike, a trip to Europe that involved climbing umpteen steps, or some trauma, often forced over-flexion of the knee.

The repeated or sudden increase in pressure in the knee forces synovial fluid from within the knee into the semi membranosis bursa: Baker's cyst. 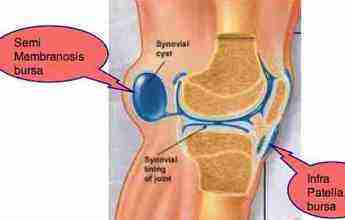 Bakers cyst knee can cause very sharp pain behind the leg.

Sudden trauma to the lower limb, a slip, for example, which forcibly flexes the joint can cause the Bakers cyst knee to rupture. The fluid forms a large mass behind the knee, draining down into the calf muscle.

Taking up space and putting pressure on the other structures behind the knee, it causes acute pain and prevents you from bending the joint.

A lady, an otherwise healthy seventy year old woman, first consulted me with knee pain and stiffness some twelve months ago. She had been obese, but weary of the disability that goes with obesity she had already made the decision to lose a lot of weight, which she had successfully done following a vegen weight loss programme.

She admitted that it had been difficult, but less hardship than the increasing pain and disability of her knee arthritis.

But the damage was done. Increased pressure of femoral on tibial cartilage had caused a severe hole to develop in the hyaline.

Despite my doubts she responded well to gentle mobilisation of the knee, a quite strange diet and joint exercises. Within two months she was walking normally, undertook a trip to visit family in England and was enjoying the normal life of a grandmother.

Interestingly research shows that the most effective treatment for knee arthritis is weight loss. Simply unloading the femoral on tibial cartilage stress; for her it was working.

Then six months ago she slipped on a bank, forcing the knee into full  flexion. Ouch; she hobbled in, and again responded surprisingly well to some basic chiropractic treatment. A small mass behind the knee made me wonder if a Baker's cyst was developing.

Then two weeks ago she went for a long walk over difficult terrain down a deep river gorge with family. Next day she could barely bend her knee, limping in agony into the clinic.

On examination, it was clear she had a very large mass  in the posterior knee fossa, extending down into the medial calf muscle.

With the next trip overseas imminent, I thought an ultrasound scan wise. Indeed, a very large Bakers cyst knee with blood in the fluid. The radiologist recommended that the cyst be drained immediately.

She declined, without any encouragement from me, being about 30 percent better after the first chiropractic treatment.

Arthritis symptoms are common in the Bakers cyst knee, and it's a common sequela in degenerative joint disease. 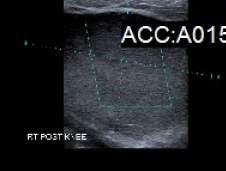 In short, a large bloody mass somewhere between the size of a golf and tennis ball.

Within three treatments, she had almost no pain and was walking normally.

She has again surprised me, and will go on her overseas trip tomorrow after all.

Taking with her serious warnings that the communicating channel between the inner knee and the Bakers cyst knee still exists. She's not to attempt the Thirty-nine steps, and any over-flexion of the knee will again force synovial fluid into the ruptured Bakers cyst.

I will report again in a month on her progress.

The moral of the story?

Gentle, sensible chiropractic treatment is successful with many conditions that would not normally pertain to the chiropractic domain.

Omega 3 and its place in arthritic inflammatory conditions.

There is now very strong research that omega 3 fatty acids helps enormously with arthritic conditions. There are three of these healthy fats:

They are found predominantly in foods like fatty fish, freshly ground flax seeds, freshly cracked walnuts, avocado; start eating them regularly when developing swollen painful joints. Better still, before as they also prevent heart attack and many other cardio vascular and neurological diseases including Alzheimer's disease. Preferably before the heart attack or Bakers cyst knee.

Patello femoral pain syndrome remains one of the most common knee afflictions, and the easiest to treat.

Pain and grating behind the kneecap is a common degenerative condition; it may by the prelude to Bakers cyst knee.

Art and science of chiropractic

The first step in dealing with pain in the knee is a careful and thorough examination; special scans may be necessary to make the correct diagnosis. Having said that, many conditions can be assessed by the astute clinician without the use of expensive tests.

But it takes a combination of art and science of chiropractic to fix these conditions.