Acute knee trauma can happen to any sportsman or woman.

The average chiropractor perhaps does not see many patients immediately after an accident. More usually, after an MVA, a serious fall from a horse, a severely sprained ankle or torn ligaments anywhere, the patient will first go to the emergency room; and perhaps rightly so.

The first step is often to rule out fracture, so immediate access to xray equipment and scanners is useful.

The problem then is that the patient only finds his or her way to a chiropractor some weeks, months or years later to what might perhaps have been the treatment of choice.

There is intense competition for patients' dollars between health professionals. It is up to you to make informed decisions about your treatment, particularly once it's clear that the current management is just not working. Hence this website, Chiropractic Help, to enable you make the right choices.

I wish I could tell you that all health care is altruistic; it is not. In a significant number of professionals' minds it is all about the money. If you are uneasy about what is being sold to you, get another opinion before making a final decision.

Mr B, a thirty-five year old sportsman made that decision to choose chiropractic over orthopaedic surgery. Whilst playing hockey he twisted his knee, heard a loud crack and fell writhing in pain to the ground; acute knee trauma.

Cruciate ligaments prevent anterior to posterior translation of the lower leg at the knee; they are often affected in acute knee trauma when the foot is fixed but the femur is forced into flexion or extension.

The two cruciate ligaments are arranged in the form of a cross. There are two of them. They stabilise the knee joint.

They limit movement of the lower leg in the anterior to posterior plane; forwards and backwards. Acute knee trauma can affect either of them. 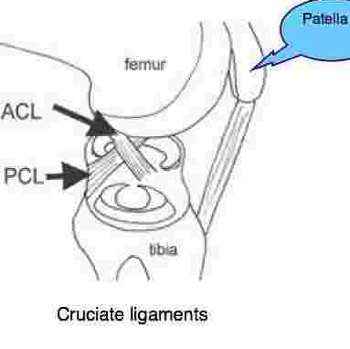 Unable to walk except on crutches, he consulted another health professional who declared he had a ruptured cruciate ligament and should go immediately to a surgeon for reconstructive surgery.

He decided instead, two days later to consult me. The knee was moderately swollen, and he was unable to either straighten or bend the knee. Weight-bearing was out of the question: excruciating pain.

Any attempt to either straighten or flex the knee caused severe pain. He had hardly slept for two nights, and even simple matters like dressing and getting in and out of the car were impossibly painful.

Interesting aside: the words cruciate, excruciating and crucify all from the Latin: to torture. Torn cruciate ligaments is indeed tortuously painful.

Collateral ligaments together with the cruciates are the great supporting structures of the knee; once severely torn in acute knee trauma the whole joint is weakened.

However, orthopaedic testing pointed to a strained lateral collateral ligament, but fortunately not ruptured. They limit sideways, in and out, movement of the lower leg.

There was some increase in the AP drawer test for the posterior cruciate ligament. An anterior rupture causes immediate, severe swelling of the knee which was not evident.

Interestingly, there was a complete neurological switch off of the quadriceps muscle. He was simply unable to contract it.

The AP drawer was not painful, but there was very slight sponginess of the posterior cruciate ligament. McMurray's test for a meniscus tear was difficult to perform, since he could not bend the knee beyond about 30 degrees.

Acute knee trauma of this nature almost invariably affects multiple tissues. Sometimes, many of the tests are positive making a diagnostic nightmare for the clinician, in the absence of ultasound and MRI scans.

Treatment consisted of mobilisation of the knee joint and an adjustment for a posterior lateral tibia; cold and hot therapy done at home and a vigorous exercise programme.

So, what is the response to treatment?  Happily, yesterday after five chiropractic sessions over eight days he has 75 percent less pain, though the disablement is only 35 percent improved. He's to stay on crutches as weight bearing remains painful.

He can now flex the knee to 100 degrees and McMurray's test for a torn cartilage, meniscus, is still negative. 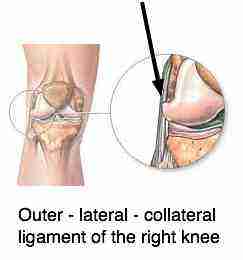 Acute knee trauma is a clinically challenging phenomenon, in and out of the chiropractic scenario. We have one great advantage, and that is no hospital acquired infection occurs.

He is able now to contract the quadriceps muscle, though the response is still reduced.

My point: gentle, conservative Chiropractic is also pertinent to acute conditions. The patient is pleased that the likelihood of an expensive MRI and arthroscopy has now passed. Interesting arthroscopy knee surgery research on professional American basketball players suggests that a placebo arthroscopy is more effective than the real McCoy.

Expectation: The knee is likely to remain weak and vulnerable for 6-8 weeks. Whether he can return to a high level of field hockey remains uncertain.

Thought: He warmed up properly, played a half, came off for half an hour and returned to further play. It was during the second phase of play that he injured his knee. Between, it would have been wise to put on  a tracksuit, and again stretch and warm up before returning to play.

Update 1: It is now three weeks since the first consultation. He has very little pain, but some on full weight bearing. The lateral collateral ligament test is negative, there remains some swelling, but perhaps 80 percent less. Flexion is still limited, but at 130 degrees. I have encouraged him to continue with one crutch, weight bearing is only slightly painful. We are into rehab exercises. There is considerable wasting of the vastus lateralis, one of the quadriceps muscles.

Update 2: Four weeks has passed and he's now walking without crutches, there is almost no swelling, flexion is nearly full, but hyperextension remains very slightly limited and painful. He is cycling on a home trainer for thirty minutes per day.

Update 3: Eight weeks and he walks normally, cycles outdoors regularly, has no pain. The wasting of the quadriceps muscle has almost returned to normal.

It's all a matter of preference. Do you want to give nature and chiropractic a try before going for more radical treatment? Frankly I doubt he'll get back to hockey or squash. But he went walking in the mountains with his five year old daughter on his shoulders last weekend, with no discomfort. Acute knee trauma can be well managed with a sports oriented chiropractor.

Arthrogenic muscle inhibition is the effect of an injured or arthritic joint on the muscles supporting the area; it's one of the early visible signs after acute knee trauma. The thigh muscles begin to waste and the leg becomes thinner.

"genic" - relating to, produced by

The immediate switching off of a muscle after trauma to a local joint, has well demonstrated in regard the knee. There are several scholarly articles in the literature. You are simply unable to contract the muscle; it is in effect paralysed. It soon becomes weak and wastes, the thigh becoming much thinner after acute knee trauma.

A "Quad setting" exercise should be started immediately to limit this serious sequela of any acute knee trauma.

Interesting: You will be unable to contract the quadriceps of the injured leg. But... if you do quad setting of both knees simulaneously, it presses the right buttons. It starts with just a tiny contraction of the involved quad which, within a few days increases to a normal contraction. The muscle will still waste to some extent.

It's now twelve weeks since the injury, and he can do almost everything, bar heavy sports involving twisting. He is exercising enthusiastically, and I have discharged him.

Update 5: I saw Mr B recently socially. He is interested in beekeeping, and we discussed how to get a swarm of bees out of a tree. His knee is fine. He is lucky, as he missed the knife by a whisker. Chiropractic works sometimes with acute knee trauma too.

Anecdote: An acquaintance, a top rugby professional player, went for arthroscopic surgery for a similar injury. He suffered a "hospital-acquired infection" (aka nosocomial infection) which effectively ended his career. Add to that the considerable dangers of a general anaesthetic and considering conservative treatment makes sense.

Chiropractic practitioners love a challenge, be it acute knee trauma or a severe slipped disc. The key is not to delay if you know you've had a serious injury. Once the condition has swollen it becomes much more difficult.

Untreated injuries of this nature leave the joint unstable; arthritic degeneration of the hyaline cartilage soon begins, and a lifetime of pain and disability. Life without medication becomes a pipe dream.

These useful links will lead you to allied pages if you have suffered from acute knee trauma. Picture of the knee contains some interesting information from WebMD.