Whiplash and cervical artery dissection is 400 times more frequent in the first year after whiplash.

Whiplash and cervical artery dissection should be kept in mind by all doctors and especially chiropractors. 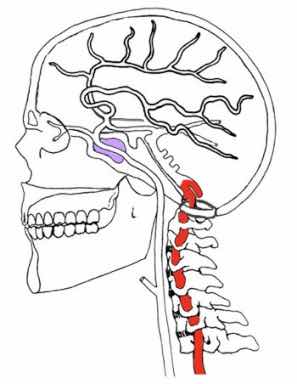 There are four arteries supplying the brain with oxygen-rich blood. Two carotid arteries anterior to the spine, and two vertebral arteries (in red) which wind their way up the transverse vertebral foramena within the spine ultimately forming the basilar artery located in the brainstem .

A dissection occurs when a tear forms in the innermost part of the arterial wall, the tunica intima, allowing blood to collect behind the intima and the next layer of the artery, the tunica media. This can lead to a complete blockage of the artery, neurological complications are common and an embolism can occur further complicating the condition. 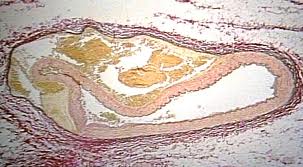 How common is Cervical Artery Dissection?

It is a very uncommon condition, with only 4 cases per 100 000 people. It can occur spontaneously particularly in smokers and people with high blood pressure and certain medical conditions such Fibromuscular dysplasia.

Cases have been reported after extension of the neck, such as in washing the hair at the hairdresser, painting the ceiling or extreme yoga movements; after chiropractic manipulation of the upper cervical spine (1/ 5 million manipulations); coughing and sneezing.

And most important for the chiropractor, after whiplash.

In the European Neurology journal (October 2010) it has been reported that researchers did a retrospective study of 500 whiplash cases, searching for the occurrence of Cervical Arterial Dissection during the following 12 months.

They found 8 cases / 500 whiplashes in the twelve months following the whiplash. That is 1600 cases per 100 000, or four hundred times greater than the norm for the general population.

In the period 4-12 months after the whiplash the incidence was 600 per 100 000, still relatively high. In the first four months it must have been much higher (not reported in the abstract).

The authors, Kargel et al conclude: "The victims of car accidents should be screened for arterial dissections."

It has been accepted by the Chiropractic profession that there is a very small chance of stroke after an upper cervical manipulation (about 1 / 5 million manipulations, depending on the research).

However, new research shows conclusively that the incidence of stroke was no higher after a Chiropractic consultation than after a Medical consultation.

At least some of these very rare strokes occurred spontaneously and had nothing to do with the Chiropractic or Medical treatment.

HOW SAFE IS CHIROPRACTIC?