An index finger sprain can be serious and disabling, but usually that need not be so with chiropractic.

It happens when the digit is forced into flexion, towards the palm, or in extension. It can occur sideways too, but that is less common.

The most commonly affected part is that between the finger and the hand, the so called metacarpal phalangal joint, or MCP.

It can occur between the phalanges too, but where two very movable parts meet, injury is less common. It's where the nearest or proximal phalanx meets the more rigid metacarpal in the hand that most of the problems occur.

A joint is stabilised by a series of strong ligaments to prevent the finger from flexing or extending too far. When a powerful force stretches these structures beyond their elastic limits, then a sprain occurs. The same happens in knees, ankles and in fact all joints. These injuries face the busy chiropractor on a daily basis, particularly if he or she is sports oriented.

Index finger sprain is difficult because of the myriad of tiny muscles and ligaments. 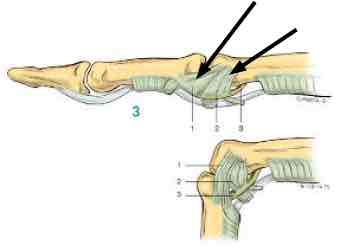 The names of these particularly ligaments doesn't concern us in this post. Notice also the tendon running to the terminal digit so that you can flex it. The muscle belly of this tendon is in the forearm.

If either tendons that connect a muscle to a bone, or ligaments linking bone to bone, are stretched too far then strain and sprain occur.

To test for ligament sprain, your chiropractor will stretch the joint passively; that means that your muscles do nothing, so the tendons aren't activated.

Swelling of the joint, sometimes discolouration, redness and pain, and changes in the range of motion are the signs of index finger sprain.

Testing the tendon and muscle complex on the other hand is done by keeping the joint quite still, but you contract the contractile tissues yourself against resistance. The ligaments are not affected by this contraction; pain is a sign of strain of these structures.

Muscles and tendons are strained.

This lady fell awkwardly in a carpark falling onto the back of her hand, forcing it into flexion. Injuries of this nature happen so fast that one rarely remembers exactly what happened, particularly if there are other more painful injuries. In her case she had a nasty gash to her face that required stitching by her medical doctor. 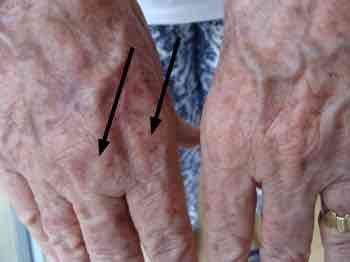 Two months later her right hand, and in particularly the middle and index and fingers still showed signs of sprain and strain.

There was distinct oedema, or swelling, and local tenderness of the metacarpal phalangeal joints; the range of motion was distinctly limited, both in flexion and extension. Those are the signs of index finger sprain, in particular.

But isometric contraction of the muscles, without movement of the joints, was also painful; that the sign of a sprained tendon.

Those tendons pass through a sheath to the muscles in the forearm.

There are other muscles that move the fingers sideways, opening and closing them; known as abduction and adduction of the fingers. Isometric contraction of those muscles, known as the PADS and DABS, was also painful.

She didn't have a great deal of pain unless she tried to use her hand; opening the milk bottle for example was very painful. The concern of course is that two months after the injury she was still quite disabled. Gardening was difficult.

Finger sprain is probably one the less common conditions treated by your chiropractor but, because the principles involved are the same whether you are dealing with a shoulder, knee or ankle, he or she is quite qualified.

Those are to restore the range of motion by gently mobilising the index finger sprain, using ice to control pain and swelling and various muscle techniques to rehabilitate the contractile tissues.

This lady responded to these basic chiropractic techniques very quickly despite the duration of the injury. After only two treatments she declared she could again open a milk bottle and the pain was 60% less. Her hand was still swollen.

However, then the fifty percent less pain rule kicked in. She was mystified that the joint remained swollen and the pain increased a little; perhaps only 40% better than the last months. But she was again using scissors, able to garden with secateurs and of course the milk bottle was not a problem.

As healing occurs and the pain lessens we pick up all those activities that we've been denied for months; as the pain recedes faster than healing occurs sometimes we get back in the deep end again too quickly. A gardener of note, she had become very frustrated at being so inhibited; now that the pain was so much less, she returned to her garden with gusto.

It's right and proper to start doing more as healing occurs, but with a degree of wisdom and patience; otherwise setbacks occur.

If the range of motion of an injured joint is not restored, the refreshment of the synovial fluid becomes limited, inhibiting the flow of fresh nutrients and oxygen to the cartilage lining the joint; and there's a build up of waste products of cartilage metabolism; critical in the treatment of an index finger sprain.

These two potent forces lead quite quickly to what is known as immobilisation arthritis, and the joint becomes permanently stiff and painful.

Stretching and mobilising an injured joint is vital to prevent permanent disability.

Whilst the classical chiropractic of DD Palmer has only to do with the spine, most modern chiropractors are qualified to treat any joints in the body, those in the ear excepted; and that would include an index finger sprain.

Tingling in the fingers

Occasionally the swelling associated with an index finger sprain may irritate the nerve causing tingling in the fingers; carpal tunnel and the pronator teres syndrome that effect the median nerve need to be excluded; they affect fingers from the thumb to the ring finger.