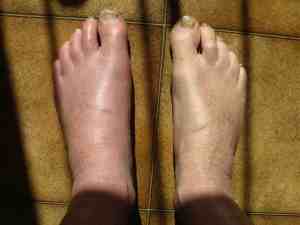 Gout is a painful form of arthritis best treated by diet and NSAIDs.

It's important, as always, to recognise the early symptoms of arthritis, and gout is no different. For most folk it's an irritation rather than all fall down, but like all diseases needs to be taken seriously; it can be extremely disabling and painful.

What is it and what are gouty tophi?

This is an extremely painful condition, most usually in the great toe, but it can occur in any joint in the body.

The onset is sudden. You wake up in the morning with a slight pain in the lower limb, and by midday you can barely walk. The pain may be in the big toe only, but usually spreads to the whole foot, and even up the leg.

What causes this nasty condition? Uric acid is a quite normal breakdown product of protein metabolism, particularly red meats and sea foods.

In this painful condition there is a missing enzyme that is vital to the break down and normal excretion of uric acid. The result is that urate crystals form in the joints causing them to become red, swollen, shiny and extremely painful; the whole foot becomes hot.

They can also build up in the kidneys causing stones.

Mushrooms have been implicated as a causative factor, as have diuretics.

The vast majority of people with high uric acid remain asymptomatic and never develop pain. Why? We're not sure, but it is mostly to do with the overall wellbeing of the individual. Eat healthily with plenty of fibre from fresh fruit and salad, drinking plenty of water, exercise regularly and you probably won't get gout, even if you are missing the vital enzyme and have high uric acid.

But prolonged and repeated attacks cause gouty tophi.

Read more about an essential oil from Juniper which can help disperse the uric acid crystals. Essential oil ... especially Juniper.  In general, arthritis is about oils, fatty acids in the body. The juniper contains many organic oils with the unlikely names like pinene, camphor and myrcene. Whilst hard research has not (yet) been done on the effects of these unusual oils on the body, juniper oil has been used for centuries for gout and arthritis, swelling in the lower legs, problems with the prostate gland causing urine retention, and many other ailments.

There is strong scientific evidence however of other essential oils, a deficiency of which definitely causes the early symptoms of arthritis and ultimately the disfigurement and disabality of the arthritic conditions.

Gout is a form of arthritis but it's doubtful that straight chiropractic has a role to play. 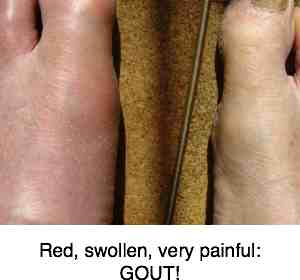 Odd, only the left foot is affected. With peripheral joints like the toe and elbow the sudden onset of gout is usually easily diagnosed.

However, gout can affect any joint. Over the past two years I have been treating a patient, first with very acute right shoulder pain. Then three months later severe sacroiliac joint pain, then severe pain in the lower back pain radiating to the left hip and thigh. In all instances, the presentation was baffling, both to his medical doctor and myself. It wasn't a frozen shoulder, or rotator cuff syndrome, it wasn't the typical sacroiliac joint syndrome that chiropractors treat on a daily basis.

The severe back and hip pain was more typically a chiropractic problem, but there too on reflection, neither was it straight forward.

Now suddenly, the typical presentation of severe pain in the great toe. Underlying all these episodes that lasted only a few days, but in each case very severe, atypical joint pain, was gout. A build up of uric acid crystals in the joints.

Why this joint, then that, sometimes right, on other occasions left? No one knows.

What provoked these attacks?

Now this is interesting. Being a doctor is fun, like being a detective, looking for unusual patterns, and the unexpected.

This patient was a fairly heavy beer drinker. Two quarts a night, which probably makes him an alcoholic. But to prove to himself, and his family, that he was the master, not the servant of booze, he would periodically give it all up for a week or two.

Bingo, giving up beer, coincided with cutting back on two quarts of fluid in his diet. Going without what was probably the very cause of his gout, alcohol, simultaneously caused severe attacks of pain. At the same time, he would instead drink the juice of three freshly squeezed oranges; that was very acidifying.

No one is quite sure why but, whilst hospitalisations in the USA in the last 20 years have increased by 11%, hospitalisations due to the Big G have mushroomed by nearly 400%; a United States explosion. That's nuclear! Avoid mushrooms if you suffer from the Big G! Otherwise eat masses of them!

Common sense can be totally misleading, but it's not unrealistic to assume that it's related to the 'crap' fast food diet that Americans 'enjoy'. Getting back to eating a genuine salad (not a leaf of lettuce and a quarter of tomato) several days a week, plenty of fruit and raw food in general, back to nature is surely what it's about.

When did you last eat a bowl of legumes? A beetroot? Cold water fish? A bowl of olives? Bean sprouts? Take a look at our Healthy Living Page.

"The American College of Physicians says, that there’s a lack of gold-standard evidence – in the form of randomised, controlled clinical trials – to prove that patients with gout should be put on a long-term drug regimen to lower their uric acid to any specific level."

It's a very treatable disease but it is doubtful that straight chiropractic help has any role to play in the treatment of gout. In the acute phase it is best treated with NSAIDs and medication to reduce uric acid. As with all inflammatory conditions, icing with an ice cube is the topical treatment of choice. Once the acute phase is over it is best to reduce protein rich foods, especially red meat, which is beneficial anyway. Mushrooms should be avoided. According to Wiki the red wine story is a myth, but beer has a profoundly detrimental effect. Shame!

More salad and, as with all the inflammatory arthritides, fasting may be of value.

Like all diseases, if neglected, it can produce gross changes in the body particularly, in this instance, in the joints.

Of concern is that treatment with a bisphosphonate drug may cause osteonecrosis (bone death) in some joints.

There is much that can be done in the way of natural arthritis relief for the Big G. But you will have to do your homework for good solid dietary suggestions that MAY enable you to phase out, or at least minimise your drug intake.

It's important to recognise the early symptoms of arthritis, in this instance, gout.

Most people get early warning signs, and you will have to learn to recognise yours. You are likely to get warnings like this:

Your first attack will probably pass within a few days. Drink plenty of water, cut out all beer, mushrooms and red meat, and take a few over the counter anti inflammatory drugs, recognising the dangers if you take them for any length time. Max three days.

Exercising the foot to help remove the oedema will be extremely painful. But... if you stand in a cold swimming pool, within a few minutes, you'll be able to move the toes and exercise the foot and ankle too. It's probably not visible on this photograph, but the redness and swelling is progressing up the lower leg. (That's an artifact over the second toe, a bug floating on the water.)

And, if you start to get repeated attacks...

A G-attack seems to have a very sharp curve whereby the longer you wait to intervene, the more the related pain/discomfort and therefore the longer it will take to heal. Hit it early!

Take the colchicine for at least 3 to 4 days, and continue the goutex and alkalising salts once a day for at least a week.

If you delay then there's only trouble coming.

In severe cases, or when you have waited too long, an anti inflammatory works wonders to decrease the severity of the pain. If desperate you might also like to use allopurinol or its generic puricos for a few days to help to inhibit uric acid production, but only in patients who have repeated attacks.

Everyone concerned about their overall health, and not just gout, should be able to at least vaguely answer the question what are phytosterols? They are vitally connected to the treatment of gout.

The name gives it away. Phyto has to do with plants; those compounds that have a structure similar to cholesterol.

Phytosterols and omega 3 are a part of the solution.

Gout is one of the many forms of arthritis so increasing plant foods that contain phytogens and omega 3 makes sense. A tablespoon of freshly ground flax seed sprinkled daily on your cereal contains both large amounts of both lignans and alpha linolenic acid, one of the omega 3 fatty acids.

And what are phytosterols you may well ask, and want more information. 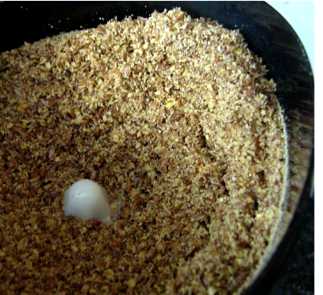