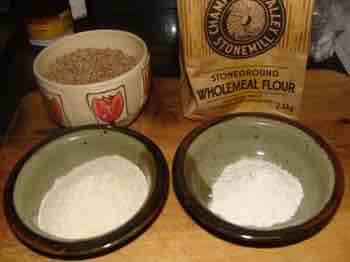 Whole wheat vs whole grain is an important subject for bakers and chiropractors.

Alas, there is a world of difference and it is not all pure semantics.

Food companies are allowed to describe their product as wholewheat flour so long as it contains 60 percent of the grain; according to Tufts University, even worse, that figure is 51%.

So, which 40% have they removed? Your guess is as good as mine, but I think you can assume, to make it more palatable to our tongues, it includes the bran and germ; what Westerners love is the pure, white, highly refined starch.

I learnt this the hard way some twenty years ago. After I had purchased a grinder, a patient brought me a 70kg bag of whole grain. For a while everything was fine, but within a month or two the grain was inundated with tiny black beetles. What was interesting was they ate mostly the kernel; that is where the goodies are to be found.

Food manufacturers make sure that we humans get mainly the starch, and the bran and kernel goes to the hogs.

That kernel contains the protein, vitamins and fatty acids. They are removed and sold to us in capsules and the white flour appears on the supermarket shelves, bleached and devoid of all goodness. Is it any wonder that the Western world is so sickly and obese?

Note that brown flour is only white meal to which some of the bran has again been added. It contains none of the germ.

So, to be called wholewheat flour by law it must contain at least 60% of the original grain.

If you buy wholewheat grain, and the beetles do not appear, it is because it has been poisoned with phostoxin. It kills the bugs, but what does it do to us?

Whole wheat vs whole grain tells of the contradiction that much flour can be so labelled with only 60 percent of the goodies left; nearly a half, mainly the germ and bran has been removed.

I eventually worked out a way around the problem. When the bag of wheat arrives, it goes immediately into an old deep freeze that we keep in the garage.

On the left, in the photograph above you can see the wheat granules and the flour after it has been through our grinder; you will notice the pale brown colour.

On the right is wholemeal flour but you will see it is quite a different colour, almost white. Nearly a half of the wheat has been removed, quite legally, presumably the germ and the bran, and the remainder is sold to us, masquerading as the real thing; but it is not. It is a counterfeit.

Much of the goodness has been removed; that you can buy back from the health food store for a princely sum.

Part of the reason they do this is because the fatty acids start going rancid once the grain has been cracked allowing oxygen in. Refining increases the shelf life.

The other is that it increases their profits; the really valuable part is sold to the vitamin companies, and they can charge more for wholemeal flour, except that it is not the real McCoy. Truth is that it is a big fat lie.

Is there a solution? Yes, there is but it comes at a price. Our electric flour mill is nearly twenty-five years old, and never given a hiccough. 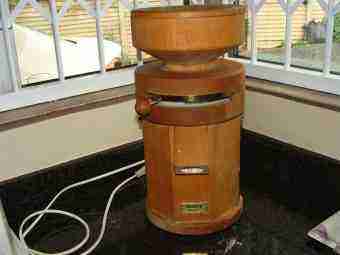 Our Hawo wheat grinder is ancient now and it's worked for all that time producing for us genuine stone ground 100 percent wholewheat flour; it takes about two minutes to grind enough for a loaf of bread.

Our flour from the electric mill, using wheat berries direct from the farmer, costs one third of the semi refined stuff in the supermarket; 100% whole meal simply isn't available off the shelf in South Africa; you may be to sniff it out in your neck of the woods; but remember, once ground, the fats start to go rancid.

Whilst that is happening, I am busy preparing the rest of the ingredients. In all, it takes 6 minutes from beginning to end to make the bread dough, plus five hours of course for it to prove, rise and bake.

Your wheat grinder is not cheap, but it will eventually pay for itself. In South Africa the whole grain cost R4 per kilogram, whereas the refined flour costs R12 from the supermarket. I expect the three times ratio is similar in your neck of the woods.

Then you don't have to buy vitamin E capsules and the other goodies in genuine 100 percent wholemeal flour.

Best of all, your own loaf, sans sugar, extra salt and preservatives tastes devastatingly delicious. It's a true health food, unlike that in your supermarket; unless it's sold as 100 percent wholewheat bread.

Whole wheat is only best source of vitamin E. New research reveals that frailty syndrome is caused in large measure by a deficiency of four vitamins, one of which of course is E; more, that from capsules it is far less effective.

"Let food be thy medicine, and medicine thy food."

100% whole wheat contains an abundance of vitamin E, but you can be sure that your 60% "whole wheat" contains little or none. It's found in the oils fraction which has been removed to prevent it going rancid. It's an important anti oxidant.

The wheat germ a large amount of oleic acid, a monounsaturated fatty acid that is the main part of very healthy olive oil. This is particularly important to chiropractors as the fatty myelin sheath that lines most nerves consists of oleic acid. Without the sheath nerves won't conduct. You may have heard of "demyelinating" diseases that attack this lining.

You may be asking what is oleic acid?

One other fraction that is removed is the omega 3 fatty acid, alpha linolenic acid. A diet rich in omega 3 is strong anti inflammatory in the body.

So you can see that whole wheat vs whole grain is a vitally important subject, especially since the millers are allowed to deceive us with their "whole wheat".

If you do purchase milled whole wheat flour, or even if you grind it yourself, do keep it in the deep freeze. It does not keep.

Lignans are vitally important phytochemicals found in whole grain, but have usually been refined out in so called 'whole wheat' flour. It's a huge subject on its own, and a major cause of the raised cholesterol that so many suffer from.

If you want to get off statins safely, then a large part of the solution is to start enjoying 100% whole grain bread; if you can find it. That's why we bake our own low GI bread.

Folk who's diets provided large amounts of betaine, which is rich in 100% wholewheat, have very significantly lower levels inflammation markers like C-reactive protein. This is because it supplies a vitally important enzyme for the methylation of toxic homocysteine.

Virtually all the betaine is to be found in the bran and the outermost layer of the inner starch known as aleurone.

Researchers publishing in J Agric Food Chem, under the title analysis of betaine and choline contents of aleurone, bran, and flour fractions of wheat using nuclear magnetic resonance (NMR) spectroscopy have found that white refined flour contains almost no betaine as the aleurone layer is removed along with the bran in conventional milling.

True 100% whole grain is a rich source of this betaine, whereas suspect "whole grain" contains virtually none. Millers have spun such a network of lies around these terms that none of us can be really sure what's what in the zoo.

Look for the term 100%; then you can be sure. We have chosen to mill our own wheat so we know it's rich in the anti inflammatory betaine.

Spinach, beets and 100% whole wheat are the primary sources of betaine; any form of refining that removes the bran removes of this invaluable vitamin-like substance.

Because betaine is the metabolite of choline, it's not given vitamin status or considered an essential nutrient.

Healthy living tips are only for those ready to ring in some changes, and that's for you, because you wouldn't be reading about boring whole wheat vs whole grain flour unless you were already to committed to a new and alternate lifestyle.

It's little baby steps, one after another, that eventually leads to a whole new outlook on life. There's no better place to start than to declare that you will never buy white bread again. Don't become a healthy nut neurotic, so enjoy a soft roll when you go out to dinner with friends; just don't provide them in your own home.

If you insist on a sweet loaf, then this honey bread recipe is one of my favourites; it is easily done in the machine. Using real wholewheat rather than the counterfeit is what provides the vitamins, minerals, lignans, betaine and fibre; it rises better too.

This gluten free bread recipe may be of interest, either using no wheat at all, or a sourdough starter.

Should you have an intolerance to wheat, and even Coeliac Disease, you'll be relieved to know that using sourdough principles, most folk can again enjoy their bread; learn more about the meaning of gluten.

Fascinating research shows that those who enjoy yoghurt and a high fibre intake have a 33% lower risk of getting lung tumours, even if they were smokers[1]. That is massive. Real wholewheat with all the bran has benefits far beyond issues around vitamin E and betaine. I assume that kefir would have the same or even better results.

Chiropractic help is not only concerned that your joints are moving freely; it's also interested in the state of the hyaline cartilage that lines them. That means a focus on our healthy living tips, the food we eat, and the exercise we should be having. All have a profound influence on your joints. Whole wheat vs whole grain is just one tiny part of being determined to enjoy better health; and live a life without medication.

Did you know that degenerative changes begins in the cartilage in a joint within thirteen hours, in white mice, if researchers immobilise the joint?

Without vital betaine found in 100% whole wheat, there is far more inflammation in the body; hence our interest at chiropractic help.

Early symptoms of arthritis, and in fact all disease, is something we should have at hand. Dealing with any condition before it becomes chronic is the secret.

Once that hip is so stiff that your can't put your shoe on, it's too late to do much; but early in the process there's much in the way of prevention to be done.

You really can prevent hip arthritis if you catch it early on.