Health issues are additive, as every chiropractor knows, both in a negative and a positive sense.

This casefile is one of the most challenging I have ever had the privilege of managing.

Mrs P, a 55-year old woman consulted me with lower back and leg pain ... severe groin pain bilaterally and knee pain bilaterally. She weighed in at 117kg. Two years previously she weighed 160kg but after a stomach procedure had lost some 40kg. A short, squat and very large lady.

She worked long hours, standing in the main in her own business, often not arriving home until 9pm.

Any word about her weight invited an explosion.

Range of motion of both hips was quite limited, especially flexion, and adduction provoking groin and lateral hip pain. There was extreme tenderness of the Adductor magnus muscle and the capsule of both hips. 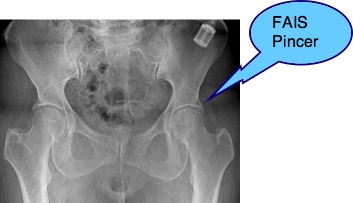 The large Pincer deformities of FAIS are readily seen in both hips with no obvious CAM deformities.

Ranges of motion of the lumbar spine

Forward flexion was not limited, not painful, but extension and lateral flexion bilaterally caused severe lower back. Kemp's test right provoked radiating pain down the right posterior thigh to the calf.

There was a marked right sacroiliac fixation and all lumbars were extremely tender. A hyperlordosis was evident. Prominence of the L5 spinous process suggested the possibility of a spondylolysthesis, confirmed on X-ray, at two levels. 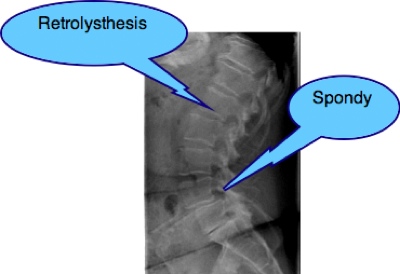 Fortunately there was no marked leg length inequality or scoliosis to complicate matters further. Nevertheless the severe degenerative facet changes are readily visible on the AP lumbar X-ray. 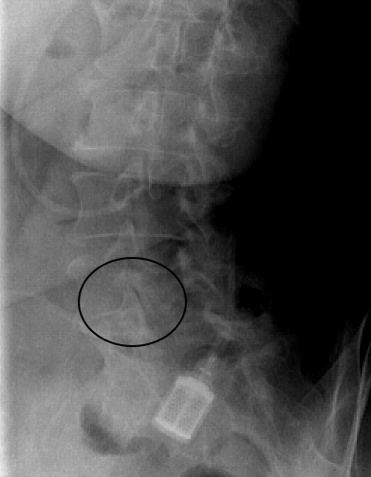 There were diffuse sensory changes in the posterior and lateral right leg (hypoalgesia) on pinwheel examination, but the motor system was intact. Generalised muscle tone however was very poor.

The Slump test for sciatica was strongly positive in the right leg, with lower back and leg pain.

Mrs P had been for extensive medical, orthopaedic and physiotherapy care, some of which had helped. However, the anti inflammatory drugs coupled with the stomach restriction procedure for weight loss were creating havoc with her stomach, and her doctor and refused further medication, fearing an abdominal bleed.

Could Chiropractic Help? I was unsure. This was a case requiring great psychological finesse, not to mention effective clinical chiropractic skills. The odds were certainly against Mrs P.

At the Report of Findings I emphasised three essential factors:

Mrs P came faithfully for her treatment twice a week for six weeks. We fairly quickly established that any side-posture adjusting caused a worsening of her condition.

However a combination of sacroiliac joint treatment using the Thompson drop protocol on a Lloyd table, McManus traction and deep soft tissue therapy in the gluteal and QL muscles brought great relief.

However, with 6-8 weeks she said that she felt 80% less pain, could walk far better and was not continually woken at night with aching legs. What also helped the aching legs was getting off statins. Working hard with foods to avoid high cholesterol and increasing the fatty fish in her diet, and taking fish oil meant that she could avoid the statins, partly causing her leg ache, I suspect, without having a rise in low density cholesterol (the bad one). Any word about her weight however invited a storm!

All in all a happy patient despite a few angry confrontations. I speak very directly to patients about bad habits like not taking holidays, smoking and obesity, but only once. Thereafter it's their responsibility.

The future of course remains uncertain. Can the improvement be sustained? Time will tell.