Really Scheuermann's disease, but to please the internet gods and the search engines, alas the poor apostrophe, occurs in about 5% of adolescents and, untreated, leads to rounded shoulders and poor posture, and a deep nagging ache, usually in the midback. It is the most common cause of an anterior curve or kyphosis in teenagers.

"The teenager with poor mid-back posture."

There are two forms: 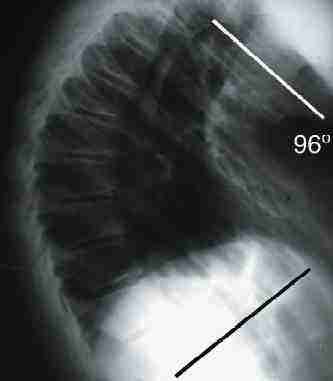 This page was last updated by Dr Barrie Lewis on 1 January, 2019

True Scheuermann's disease, 5 percent of people remember, involves four or more vertebrae. At least that was the old rule.

However, milder forms involving one to three vertebrae are relatively common, and also should be taken seriously.

Deformity of the spine in differing degrees is the norm, but they lead to an increasing likelihood of debilitating back pain, especially when associated with injury, poor muscle tone and lack of exercise; the television is enemy number one of the body, and the mind too.

Notice how the vertebrae take on a wedged shape leading to a kyphosis, or increased midback curve, as seen from the side.

So, what are the signs?

As parents we should always think Scheuermann's disease if we are constantly telling our child to straighten up, only to see them slump back into poor posture, or if they are also complaining of back pain. Untreated this condition can sometimes be nasty, though mostly in its milder forms it is more irritation than serious disease.

It has been scientifically proved that carrying heavy bags on one shoulder adversely affects this condition, and may even cause it.

Typically we are looking at the stooped, round shouldered teenager who is always complaining of back ache, usually between the shoulder blades, but also in the lower back.

And the symptoms, what are they?

Here's an interesting question. Why is it that people will confidently themselves consult a chiropractor, but dare not to bring their children for treatment for such a condition as this until it is too late? An ounce of prevention, in fact in some countries you still require a medical referral for your child to consult a chiropractor. If anything it should be the other way around when it comes to back pain!

Look at your child; even the gardener with a keen eye would notice the developing kyphosis. But did mom and dad miss it?

Most commonly parents bring their child to their chiropractor because they have been complaining of backache for some months, even years. Typically in the mid teens. The pain is usually a deep, dull ache rather than sharp or incapacitating. Often they will have been massaging the child's back on a regular basis for some months.

This deep upper back pain can also be a pinched nerve in the neck. Thus a careful and thorough examination is needed.

The cause of Scheuermann's Disease is unknown. It could be related to diet, and it may be hereditary.

Often in one generation, the condition is mild, perhaps affecting one or two vertebrae, and not really significant. Then, in a child in the next generation, or a sibling, for unknown reasons, perhaps diet, or injury, possibly a bad desk, obesity, or lack of exercise, it is much worse. Not just poor posture, but also back pain.

Fragmentation of the cartilage and bony end plates of the vertebrae occurs resulting in wedge shaped vertebrae, and so the kyphosis, anterior curve increases. It is known that the disc has no blood supply in the adult, and decreased nutrition of the bone and cartilage may be a cause. It has been proved that exercise helps, and lack of motion may be one of the causes.

Spinal cord pressure very rarely occurs in Scheuermann's disease, but nerve irritation and increase in stomach complaints and ulcers has been proved to be associated with this condition. Bombardment of the spinal cord by impulses from nociceptors in the joints adversely affects the autonomic nervous system, altering the secretion of digestive juices and the blood supply.

Look at your teenager from the side. Compare him or her with other members of the family. It occurs equally in boys and girls. Is the curve in the midback obviously increased?

From the side does your child's back look like this?

Secondly, standing behind your child, ask them to bend forwards and touch their toes. Look over their back. Is one side of the ribcage obviously higher than the other? Note well: this is a scoliosis, which may, but certainly does not always accompany a case of Scheuermanns disease. They fairly frequently go together. 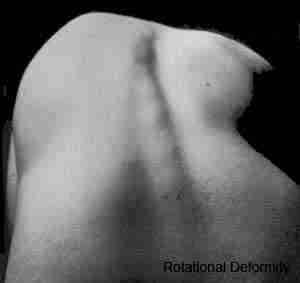 The increased curve I'm sure is obvious even to your inexperienced eye and, looking more closely at these X-rays, you can see the wedging of the vertebrae, and the fragmentation of the endplates of the bones. This is a mild case! 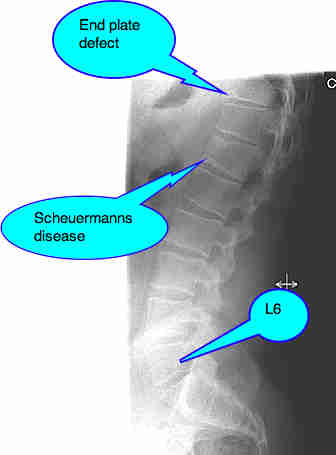 Less commonly, fortunately, Scheuermanns disease occurs in the lumbar spine. Then, it's far more serious, particularly if it's associated with another anomaly. This man has such a variant in his back: he has six lumbar vertebrae instead of five. The result: a man of 40 odd, he has had debilitating back for fifteen years. Fortunately, after six Chiropractic treatments, he declares that the pain is about 30% less. Miracle? No, it's hard work for his chiropractor (me), and hard work for him (lots of rehab exercises). Either that or suffer, I know of no other alternative.

Exercise has been proved to help with the treatment of Scheuermanns disease, but contact sport like rugby and karate are forbidden. The vertebral endplates are fragile leading to fragmentation of the bone and cartilage. Obviously trauma in the growing child must be avoided.

If you watch sport, it's fun but blows your mind

When you play at it, it's recreation and builds your body

Only when you work at it does it become simply sublime.

For the Type II Scheuermann's disease, involving the upper lumbar spine, a lifetime of back exercises is absolutely vital. Only five minutes a day will give your child the best payback of any five minutes s/he spends. Your chiropractor will advise you.

Notice how the end plate defects have produced a nasty scoliosis in the neck of the patient above. Little wonder he was complaining this morning of neck pain, rather than Scheuermann's disease back pain.

Standing behind your sitting child, is one shoulder obviously much higher than the other? 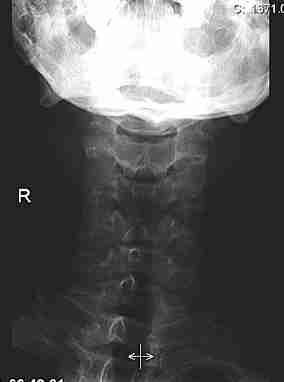 A sloping desk which encourages your child to sit upright, both at school and at home is essential. Long periods in a slumped postion places more pressure on the already complaining joints.

Ways to improve posture are important for everyone, if you looking for natural solutions for muscle pain, but absolutely vital for those suffering from Scheuermann's disease. 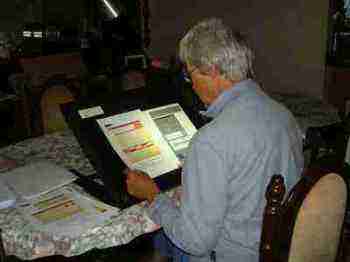 Gentle chiropractic adjustments of the spine are beneficial, increasing the movement and nutrition of the joints, but heavy manipulations should be avoided.

Specific exercises to strengthen the muscles between the shoulder blades are advised. For example, hook a bicycle tube over a strong post, holding it in both hands with the elbows at the sides. Now step backwards until the tube is tight. Force the shoulder blades together, and simultaneously pull the shoulders backwards (retraction). Repeat in three reps of ten (3x10).

Using a soft roll, over which the back is gently extended is recommended. It helps reduce the kyphosis and mobilises the joints of the spine, bringing in fresh nutrients to the cartilage end plates.

Not just at the gym, but at home on a daily basis. 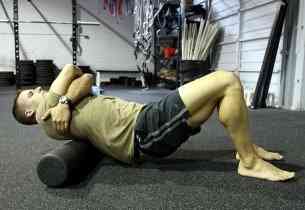 Computers and cellphones make great servants, but who would want to serve under one? They make lousy masters.