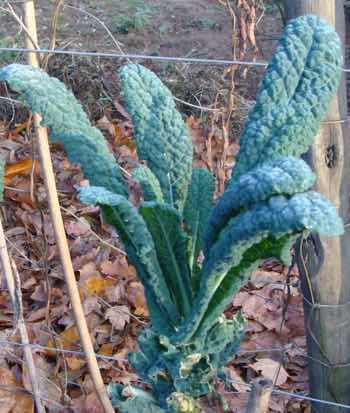 Kale benefits include certain avoidance of adult onset macular degeneration. It is estimated that about five million Americans are needlessly blind because of a lutein deficiency. 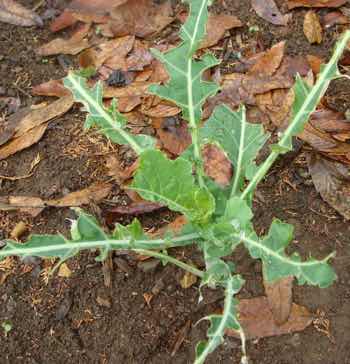 Don't allow your hens near your kale patch; they are desperate for the phytochemicals for their own very fine eyesight and eggs.

Kale belongs to the brassica family of vegetables; there are many varieties including cabbage, broccoli and cauliflower.

Together, the name of the specie is Brassica oleracea; kale is really just a wild cabbage that does not form a head; notice the bluey green coloured leaves.

In fact, I'd like to suggest that the varieties of vegetables that do not form heads get more sunshine and have more health benefits. A deathly white, tightly formed Iceberg lettuce is a pale cousin of the open cos, for example.

Like most vegetables it grows best in full sun, in richly composted, moist soil. Actually it's quite hardy and will tolerate a degree of drying out. Kale does best in cooler weather, but there are many cultivars today that will grow through the summer provided they are watered regularly.

In our mild climate in Southern Africa, at one thousand metres above sea level we can enjoy kale benefits throughout the year with repetitive plantings and, by picking a few leaves at a time, they continue on for months.

Kale benefits are many but the greatest perhaps is the carotene lutein that is vital for the retina of the eye; it together with zeaxanthin are found in very high concentrations in the macula where fine discrimination and colour are detected.

Lutein is just one of the many kale benefits; together with zeaxanthin it is one of the more common carotenoids. They are found in very high concentrations in the eye; in the retina and the lens.

Macular degeneration comes in two forms; the age related kind is a major cause of blindness in the older person.

Lutein and zeaxanthin are found in extremely high amounts in centre of the macula where the fine discrimination and colour are detected; they give it the so called yellow spot appearance owing to the property of capturing and protecting the eye from high energy blue light.

Numerous research studies have shown that those who enjoy their coloured foods receive protection from lutein macular degeneration and many other illnesses. Researchers confirm that cardiovascular disease is the main cause of death in Western countries, and that what we eat has a very significant role to play; it's the antioxidising properties of compounds like vitamin C, flavonoids and carotenoids that prevent the oxidation of cholesterol in the intima of arteries. 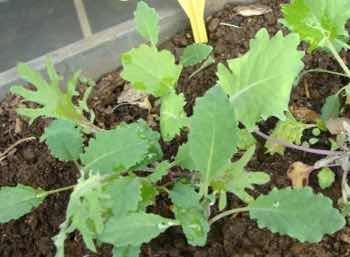 Kale germinate without difficulty; you can either plant them in seed boxes like that above, or very thinly directly in the ground. 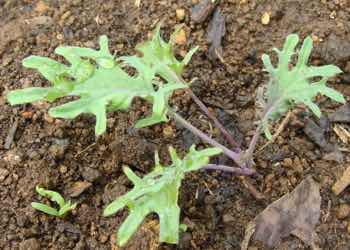 Having planted out the seedlings it's best to cover them with a cap if hot, dry weather threatens; nevertheless these wild cabbage plants are hardy. It's less than a week since this little gem was planted out; in just a fortnight we'll be picking baby fronds to go in our salads.

Like most of the brassica family they are relatively frost resistant, so one can risk planting them out in early spring. They do best, however, if one starts the seed bed in late summer so they grow into the winter.

They should be planted at least a foot apart in rows spaced by about 50cm, say; it's not critical.

Some of the tall cultivars may grow to over a metre and need to be staked, but that's the exception; mostly they are about 50cm high. They are pretty resistant to pests and fungal diseases.

It's important to note that epidemiological studies confirm that kale, and in fact all fruit and veg rich in carotenes; they reduce blood vessel disease, cardiac conditions and many cancers, but the research concerning Carotenoids and cardiovascular health in the American Journal of Nutrition found that supplements had no such advantages.

In fact, researchers found that taking carotenoids in pill form actually increased the risk of getting lung cancer in smokers.

Let food be your your medicine, and shun most of the supplements on the market. Did you know that most forms of vitamin E on the market increase the risk of getting prostate cancer, but enjoying bread made from 100 percent wholemeal flour reduces the probability?

Ominously researchers state that currently, the consumption of carotenoids in pharmaceutical forms for the treatment or prevention of heart diseases cannot be recommended.

Carotenoids like your lutein in kale benefits are fat soluble; that means they are better absorbed if eaten with avocado or olive oil.

They are carried in the blood stream by lipoproteins. Atherosclerosis of the blood vessel walls has oxidation of the cholesterol at its heart; scientists have found that the walls of the arteries are not thickened in the same way by cholesterol by those enjoying dietary carotenoids on a regular basis.

This has a significant effect also on the arteries supplies the lumbar plexus; lower back injuries simply do not heal well causing nightmares for chiropractors and surgeons, and their patients.

It is the antioxidant properties of carotenoids that prevents the damaging oxidised cholesterol from attacking the intima of arterial walls.