It never rains but it pours. Whilst in Holland in full time practice I would treat at least one or two patients a week with vertigo, using the Epley manoeuvres. But now in semi-retirement, it is probably 2 to 3 months since I have had a case.

Yesterday we had two consecutive patients with the awful vertigo. One described the world as spinning, the other that it felt like she had water sloshing about in her head. In both cases, the classic neurological test for vertigo, known as the Hallpike Dix test was strongly positive. 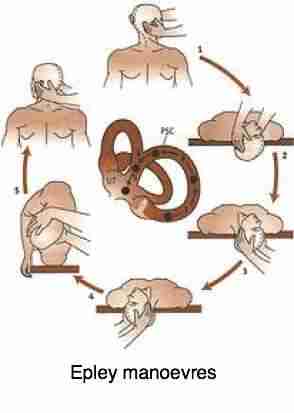 Lying a patient rapidly down on his or her side with the head in slight rotation and extension instantly produces giddiness and, looking at their eyes, they will be spinning in the classic feature known as nystagmus.

Vertigo with the associated giddy feeling is a nasty condition in which small crystals come loose in the inner ear, blocking the movement of fluid in one of the semi-circular canals.

When the balance organs in right and left ears do not agree about whether the head is in motion or not, vertigo ensues.

Drugs are not the treatment of choice; the Epley manoeuvres are and are extremely effective. By the time we had been through the Epleys three times, both cases had no further nystagmus.

If usually needs to be repeated for a few days.

Are you suffering from vertigo? Don't take pills, look for a chiropractor who knows about the Epleys. Don't let him or her adjust your neck at the same consultation. I learnt the hard way; a patient once vomited in the clinic for over two hours.

Here you can see an animated version of nystagmus on Youtube.

A vertigo case file remember is not research; it is simply an anecdote. Inner ear infections also cause the world to spin.

The first lady was elderly. It took 5 to 6 sessions of the Epleys done under my instruction by her daughter at home over a period of about a week to fix the vertigo completely.

She also has chronic lower neck pain. A week later she returned for a follow up. Hallpike-Dix was negative and so I was able to adjust her cervical spine without qualms. I resolutely will not manipulate a patient if they are suffering from vertigo, and have spinning eyes; not until until the test is negative.

Why is that? Firstly research shows that dizziness is the one condition where chiropractors need to tread warily when adjusting the cervical spine.

Whilst it's only happened once, my experience has confirmed it. That patient started immediately throwing up for several hours after adjusting her neck and doing the Epley manoeuvre; it scared the heck out of me. You've probably heard of stroke chiropractic; it's extremely rare but it can happen. Fortunately it did not.

Remember that vertigo case files are only anecdotes and, as such have no scientific value; but there is a heap of research confirming that this is not blowing in the wind.

The difficulty is that sometimes a subluxation in the neck is the cause of the vertigo. But then Hallpike-Dix will be negative. It is holy ground, and we have to be careful. Mind you, cervical manipulation should never be done in a casual or careless manner anyway.

The second patient was cured within three treatments of the Epleys; this time it was a woman in her early sixties. Under my instruction, her husband continued the treatment at home, and it displaced those offending crystals within two more days.

She too has neck problems; not the cause of the vertigo. She too returned after a week for her cervical spine adjustment. It needs to be very carefully done; gently.

Benign paroxysmal positional vertigo, the etiology of 70 percent of the condition, is caused by crystals coming loose in one of the semicircular canals in the inner ear. When the eyes receive mismatched signals from the two sides, the world begins to spin. And it can be very severe with extreme nausea and vomiting, and falling over; not nice, to say the least.

Research shows that the Epleys, not drugs, are the treatment of choice.

What's more, get up and move around, despite the discomfort. Extended lying in bed only aggravates the condition. Use a stick if necessary and remain close to the furniture and walls; falls are not uncommon and then you may have a broken hip to add even more drama to your own vertigo case file. 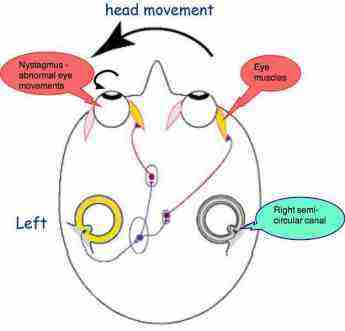 This home remedy for vertigo will help as this condition tends to reoccur; once you know these exercises you can do them regularly as prevention; it's a horrible illness and to prevent recurrence of your own case file, do these regularly.

The Brandt Daroff exercises have been developed for you to do at home; they might just save you from becoming a vertigo case file in some chiropractor's office.

If you have a serious attack, then it's probably best not to start messing around with a home remedy for vertigo; unless you've had previous episodes and are familiar with what's happening. See lower down for the link to what you can do to help yourself.

This routine known as the Brandt Daroff exercises can be very useful in the prevention of further attacks.

Vertigo is a serious disturbance of the neurological system and really should be cared for by a practitioner familiar with the Epley manoeuvres and the Brandt Daroff exercises.

That may not be your medical doctor who will most like want to prescribe Stugeron, and nor your chiropractor either; she or he may want to adjust your neck and that is definitely not the treatment of choice, at least not in the acute phase.

Finally, a short summary about your own vertigo case file. Remember that 70 percent of the time this is a completely benign, albeit nasty condition. It responds usually to a very specific set of movements of the head; in fact, what you are really doing is turning the semicircular canals to dislodge the offending crystals.

If you have high blood pressure and particularly if you have previously had a temporary ischemic attack, then your first port of call should probably be your medical doctor to rule out a stroke.

That's also true if you have just had an upper respiratory attack; a cold, flu or sinusitis.

Finally there are some important things you can do to help yourself. Do not lie in bed; don't take medication and I recommend not allowing your chiropractor to adjust your neck in the acute phase, and perhaps not at all. Find a practitioner skilled in the Epley manoeuvres  and the Brandt Daroff exercises.

Be careful; you may fall and break a hip.

STONES IN MY CLOG

Stones in my clog is chiropractor Bernard Preston's third book of anecdotes, this one from the polders of Holland. That's where he learnt the Brandt Daroff exercises. Home remedies for vertigo are vital for folk who suffer from this nasty affliction.

Don't in the first instance have your neck adjusted is Preston's advice. Think rather of the Epley manoeuvres. 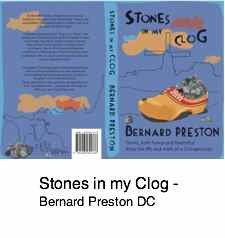 Vertigo case files are common in any busy chiropractic practice.

In one memorable case in the Netherlands, I literally lost all my cudos; to make it worse, it was shown live on regional television. Not one of those days that one remembers fondly in life, but it certainly gave me something to write about in my third book of Chiropractic anecdotes, Stones in my Clog.