Tietze's syndrome and the sternoclavicular joint

Tietze's syndrome and the sternoclavicular joint presents as a worrying lump on the upper chest.

Every chiropractor is faced periodically with costo-sternal pain, whilst it's fairly rare that it progresses to forming a tender mass over the joint: Tietzes Syndrome ...

Tietzes syndrome can affect either the costo-sternal joint, or the sterno-clavicular joint, or both. The aetiology is unknown. However, it occurs relatively frequently as a sequela of breast surgery.

When it affects the costo-sternal joint, if on the left, it is often confused with a heart condition. In fact it makes up a relatively high proportion of patients presenting with severe chest pain, with a high suspicion of MI. However, having ruled out a heart condition, a costo-chondrosis is the most common diagnosis.

When it affects the SC joint, the whole biomechanics of the clavicle, SC joint and the contents of the inter scalene triangle may be affected. As the inferior trunk passes over the first rib it may be affected producing paresthesias particularly following the C8 and T1 dermatomes.

The subclavian artery may be affected too producing signs of a thoracic outlet syndrome with a positive Adson's Test. The Upper Limb Tension Test may be positive ... 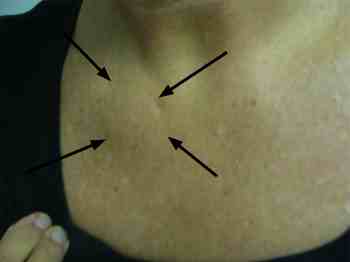 Interesting case of the week


Neck and arm pain is disabling for millions of people. The World Health Organisation WHO established a "Task Force on Neck Pain" in 2000. Their mandate? To inform and empower the public.

An extremely high powered team of researchers, academics and clinicians found that the prevalence of neck pain is about 40% of the population each year, but that only about 7% experienced disabling pain. Google: The Bone and Joint Decade 2000–2010 Task Force on Neck Pain

Mrs A, a 62-year old woman started developing vague right lower neck and arm pain some three years ago. Tingling and pain began in the fingers, INCLUDING THE PINKIE.

After various conservative treaments had failed she was referred to an orthopaedic surgeon who diagnosed Carpal Tunnel Syndrome ... inexplicable really. Why? The Median nerve doesn't supply the pinkie. 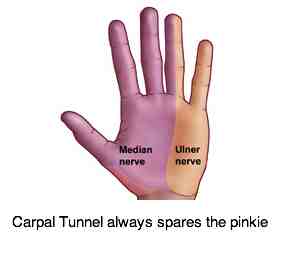 So of course the surgery to her carpal tunnel didn't help a whisker. In fact it aggravated the problem. She struggled on.

Finally, a year later the villain of the peace finally outed. A painful swollen lump developed on the joint between the collarbone and the breastbone. The so-called SC joint. Sterno-Clavicular.

Tietzes syndrome is a complex and difficult syndrome that usually presents with pain on one of the joints between a rib and the breastbone. Less commonly it affects the collarbone-sternum joint.

After four chiropractic treatments, she is about 20% better. She's not being woken at night and encouragingly is off all medication.

Moral of the story: If you have tingling in the arm and hand, and it affects the pinkie, and the doctor tells you it's Carpal tunnel syndrome, change your doctor. His/ her neurology is painfully weak.

Thought: Is the development of conditions like this lady's swollen SC joint actually the result of a misdiagnosis of a something simple  (a fixated AcromioClavicaular joint the other end of the clavicle) causing arm pain, and affecting the Thoracic Outlet syndrome ... or would she have developed this painful Tietzes syndrome anyway? We just don't know. Only future research will tell.

And can chiropractic give long term results in this painful and disabling condition? I'll keep you updated. Meantime, the early response to Chiropractic Help is encouraging. 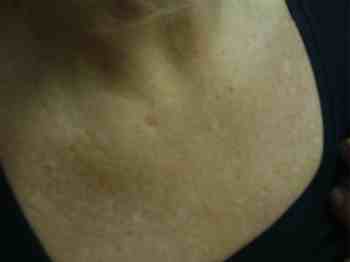 Tietze's syndrome and the sternoclavicular joint

Tietze's syndrome and the sternoclavicular joint may produce tingling in the arms and hands.