Spondylolysthesis case file comes about after years of heavy wear and tear in the lower back making it weak and unstable.

If you are a layperson, do not worry, we will explain exactly what a spondylolysthesis case file is all about.

It surely is a jaw-breaker, so we call it a spondy. There are two kinds.

The term "spondylo-lys-thesis" is normally associated with a childhood fracture in the lumbar spine, through a narrow isthmus of cartilage that has not yet turned to bone. Invariably it goes undetected in the small child.

This fracture is called a "spondylo-lysis". It occurs through the so-called "pars inter-articularis", that narrow isthmus of bone that lies between (inter) the two articulating facets, one superior, and the other inferior.

The fracture may occur only on one side (unilateral) in which case it usually does not have great clinical significance. However, if it occurs on both sides, then the body of the vertebra is free to slide forwards: a "spondy" in jargon. 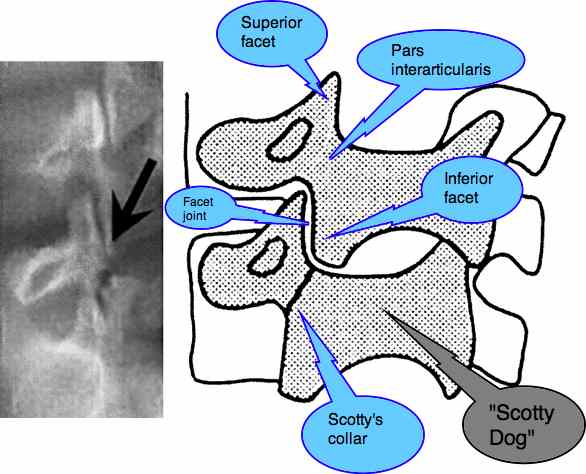 Does Scotty have a collar?

On an oblique X-ray, the clinician is always asking the question, "Does Scotty have a collar?" Can you visualise the Scotty Dog? Between his ear (the superior facet) and his front leg (the inferior facet) lies the narrow isthmus of bone that is prone to fracture in the young child. This is known as "spondylolysis".

Generally, a stable spondylolysthesis due to fracture through the pars causes a gnawing ache, but no great dramas. They certainly can be difficult, especially if associated with further trauma later in life.

Worse is the second type, which is what this case file is about. The degenerative spondy, encountered in the older person, and quite unrelated to the Type I pars fracture type, is rarely stable.

Two things to notice in the diagram:

HYALINE CARTILAGE ... what makes it degenerate?

Spondylolysthesis case file explains the pain behind this syndrome; this is the wear and tear kind.

There are six lumbar vertebrae (normally five). The body of L5 has moved anterior on L6, owing to degeneration of the facet joints. There is no spondylolysis (pars fracture). Also degenerative facets at L6-S1.

The lumbar lordosis has greatly increased. A list of the spine (and possbibly the pelvis) to the left is seen. (no specific mention whether the X-rays were taken erect or not). 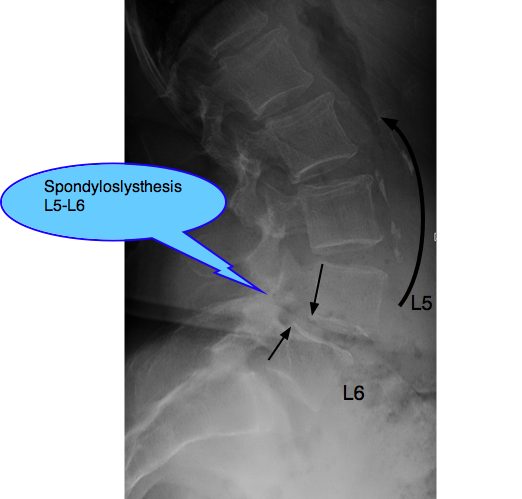 Anterolysthesis of L5 in relation to L6, Grade 1.

At the L5-L6 level there is canal stenosis due to the forward slip of the vertebra, the degenerative facets and hypertrophy of the ligamentum flavum.

At L6-S1 the canal size is also diminished due to severe facet arthritis and enlargement of the ligamentum flavum. There is possibly a small synovial cyst at the L6-S1 facet joint (left). 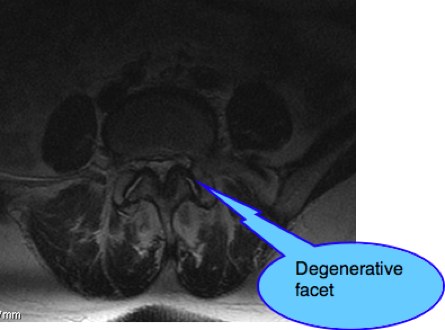 The spinal canal is diminished in size due to the grossly enlarged facets, thickening of the ligamentum flavum (found inside the canal) and, at L5-L6 due to the forward slip of the body of the vertebra L5.

A slim 73-year old woman presented with a five year history of pain in the RIGHT buttock radiating to the side of the right thigh and calf.

Two months previously pain in the LEFT low back started, radiating to the back of the left thigh and calf, with tingling on the dorsum of the left foot.

She was treated by another chiropractor 5 years previously when the pain in the right buttock and leg began, with a 60% improvement over a course of treatment.

Prior, she had had numerous consultations with physiotherapists, a neurologist and her own GP.

Trauma: Five months before the first consultation she slipped on the stairs in her home and fell hard on her sacrum, down four stairs. There was some bruising but no immediate acute low back or leg pain.

Type of pain: A constant nagging ache that she was never during the day without.

Aggravating factors: Turning, setting power with her leg, climbing stairs. Until the recent past she played tennis three days a week.

After a consultation with a neurologist three years previously, the above X-rays and an MRI were taken.

The pelvis appeared to be marginally low on the left, suggestive of a left LEG LENGTH INEQUALITY; a short limb.

On motion palpation the right sacroiliac joint was fixated. The L4 and L5 joints were tender on palpation, and fixated.

ROM: Lumbar spine flexion and side bending right and left were mildly restricted and painful, with no immediate aggravation of the pain in the legs.

The Slump 2 provoked pain in the left buttock and tightness in the posterior thigh (compared to right) when the left knee was extended. Flip test for sciatica.

Sacroiliac and hip tests were within normal limits.

Neurology: No abnormalities were detected, despite the weak feeling described in the history. Presumed to be a sense induced by pain.

History and Examination. A simple basic set of exercises were carefully described and demonstrated. To be done on her bed before arising in the morning, and before going to sleep. More often as required.

Explanation of the basis of Chiropractic.

Adjustment of the pelvis following the Thompson drop protocol on a Lloyd table.

A: No significant improvement, expected increase in pain.

O: Slump still painful in the left buttock, less tight in the thigh.

A: Early introduction of gentle rehab exercises as she is going on holiday for three weeks.

P: Add hip-hike, and gentle contraction of neck flexors and extensors with the Pelvic tilt exercise.

S: Good holiday, still improving but with some painful days after sitting in the car. Feels she is standing more erect.

A: Evaluation of chronic neck pain at next consultation.

P: Treatment as before.

S: Sudden severe exacerbation of pain, into back of left thigh, and tingling in foot, began three weeks after Consult 7.

A: Possible disc injury L6-S1. On basis of possible medial disc herniation, adjustment with pain side down (lying on left side).

P: Treatment as per consult 7.

A: Very unstable spondylolysthesis. Introduction of heel lift at next consultation in left shoe.

P: Add gentle roll on L6 left again. Patient to get up for longer periods, some sitting allowed again. However, no housework or car or shopping.

S: No leg pain. Overall 70% improvement in pain and movement.

O: Slump 4 produces no leg pain. A little in the back.

A: Relief! Think doctors don't worry about their patients too?! Two tests confirm that a 5 mm lift reduces her pain, and increases her proprioceptive balance.

P: She may begin to sit again, and is no longer confined to home. I've warned her that the pain diminishes faster than the soft tissues heal. She feels 70% better, but it's probably only 15% healed compared to two weeks ago. We'll see what the next consult in a week brings! One sneeze can change all.

S: No pain in either leg, no back pain. Not taking any medication.

O: Range of Motion of the spine is full and free (though slightly guarded). Slump Test is negative.

A: Hallelujah! The heel lift and the exercises are working.

P: No treatment today. No charge. She's happy obviously, and will return once a week for the following month for control. This is an extremely unstable back. I've told her she increase everything by 5% per day. Increasing suddenly by 30% is likely to result in a relapse. If we can get through the next month with no pain, then we can breathe a sigh of relief.

A degenerative spondy is always going to be tricky. What this lady has in her favour is her excellent weight and general level of fitness. Playing tennis three times a week in her seventies is admirable.

What she has going against her is not only the chronicity of the case, her short leg and also the extra lumbar vertebra, a so-called "lumbarisation". This almost always leads to an increased lordosis with concommitant increased stress on the facet joints. Toning abdominal muscles will be vital if we are to win with a case like this. TONING ABDOMINAL MUSCLES ...

This lady is on the verge of major lumbar surgery, for which the insurance would be paying out 50 000 or more euros, yet they expect the Chiropractor to win in seven visits. Laughable.

Stopping midway through the programme nearly proved disastrous for her. She's needed even more treatment than if she came for what was prescribed, and had a lot of increased pain. The rehab phase is absolutely vital. She has wisely (I think!) considered the back surgery alternatives but going through with the full programme is vital in a case like this. BACK SURGERY ALTERNATIVES ...

This is no misprint. Research at Harvard Medical School found that the gelatine in a chicken bones extract was very effective in managing recalcatrant arthritis. I'll have her start it next week. CHICKEN BONES ...