Chiropractic in Europe traces centuries of bonesetting, modern adjusting since 1895, and 75 years of the ECU.

The first DC set up practice in the first decade of the twentieth century, over one hundred years ago. Unfortunately his or her identity seems to have been lost.

The European Chiropractic Union was formed over 75 years. Dr Øystein Ogre is the current ECU President.

Europe of course has a long tradition of manipulation. Known as rebouteax in France, knochen einrichter in Germany, and in Spain they were called algebrista. In Denmark, manipulators were called kloge folk and in Britain bonesetters.

Francis Wilson found this gem about bonesetter Sarah Mapp from Epsom near London. Written in 1736 this poem from Chiropractic in Europe is without equal.

You surgeons of London, who puzzle your pates,

to ride in your coaches and purchase estates,

give over, for shame, for your pride has a fall,

and the doctress of Epsom has outdone you all.


What signifies learning, or going to school,

when a woman can do, without reason or rule,

what puts you to nonplus, and baffles your art;

for petticoat-practice has now got the start.


Dame nature has giv'n her a doctor's degree,

she gets all the patients, and pockets the fee.

So, if you don't instantly prove her a cheat,

she'll loll in her chariot whilst you walk the street. 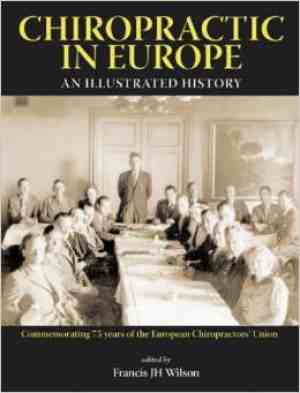 Priceless. Now that is petticoat power.

Europe has produced some of the profound thinkers of our profession. People like the Gillet family. Jules Gillet was the first chiropractor in Belgium, establishing his practice in Brussels in 1923. Soon he was joined by sons Marcel and Henri. Henri was the first editor of the European Chiropractor.

It was brother Marcel who began researching the concept of the subluxation. It was his conclusion, revolutionary and conflicting with his colleagues on the other side of the Atlantic, that a subluxation had more to do with stiffness, limitation in motion, or fixation than a misalignment as was being currently taught in America. Dr John Gillet is the author of the chapter on Chiropractic In Belgium, A Short History.

Likewise, it was Swiss chiropractor Fred Illi who epitomised the beginning of a new European emphasis on scientific research for the understanding and legitimisation of chiropractic, this more than 60 years ago. Despite small numbers compared with the Americas, Chiropractic in Europe ranks high in importance.

Chiropractic in Switzerland by Daniel Muhlemann and John Naef

Switzerland is unique in two ways. The first two chiropractors were both women, Hermine Fagan-Linder (1919) and Ida Gerber (1927). There is a photograph of Dr Ina, a very beautiful woman obviously. yet more petticoat-power!

Secondly, through a basis of political manoeuvring, chiropractors successfully circumvented attempts to have their practice included on the basis of medical referral only. In 1964 the Swiss parliament unanimously supported the inclusion of a chiropractic article in the insurance law, surely a first.

Chiropractic in Greece by Vasileios Gkolfinopoulos

Greece is particular ranks very highly as a nation in the chiropractic history books for several reasons.

In the first instance, chiro and practic are Greek words, meaning done by hand.

Secondly, Hippocrates was Greek, and his Book of Joints is of supreme importance. No less important is an ancient marble depiction of Asclepius, mythological God of healing, and his supreme insignia of a snake crawling up a stick remains to this day the emblem of medicine.

Yet more important, in the marble depiction of Asclepius, not letting blood, he has no scalpel in his hand, but appears to be giving a cervical manipulation!

Sadly, in Greece chiropractic remains unrecognised. There is no legislation covering the practice of chiropractic. However, according to a supreme court verdict that ruled against the ministry of health's refusal to provide chiropractors with a license to practice, chiropractic is not considered illegal.

To find out about Chiropractic in Europe, France, Holland, Norway ... you will have to, and should, purchase a copy of this gem. A wonderful book. Thank you Francis Wilson and your fellow contributors.

Chiropractic in Europe is a book edited by Francis Wilson.